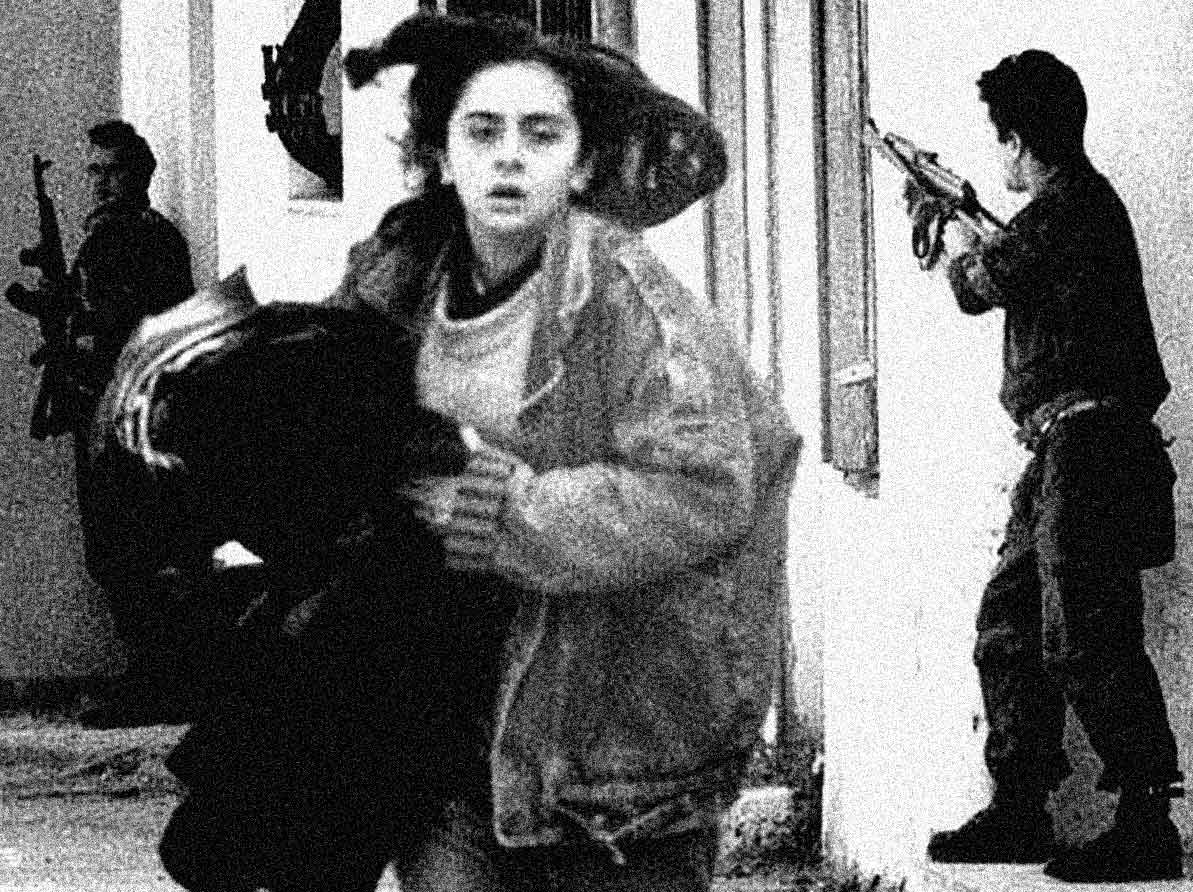 Dodging snipers in Mostar - you'd think, with all the talk about peace proposals . . . .

Dodging snipers in Mostar – you’d think, with all the talk about peace proposals . . . .

May 12, 1993 – with talk of peace proposals and the move by the Clinton Administration to consider sending U.S. troops to Macedonia, the civil war in Bosnia was still raging. The 1993 siege of Mostar between Croat and Muslim forces which began on May 9th was raging out of control. With Spanish peacekeepers stuck in the middle, and with little recourse, other than stay out of it – factions of the ARBiH and HVO militias began artillery barrages, forcing civilians to flee and the peace process to unravel.

With the possibility of U.S. troops entering the picture, there were moves by Serbian leadership and a call for a joint session of Parliament to discuss the peace plan forwarded by Vance Owen. However, some factions were rejecting the joint session, but said they would attend such a session, but only as observers. The call for a joint session of Parliament by Serb leader Slobodan Milosevic was a call to ratify the peace plan, but instead to have Bosnia Serbs vote on it in a referendum slated to come up over the weekend. It was widely believed that Bosnia Serbs would spurn the U.S. peace plan and go ahead with their referendum. However, Bosnian Muslims were asking for U.N. help over the situation in Mostar by declaring the town a Safe-Area. In the meantime, more than 1300 Muslim residents of Mostar were herded by Croats into a nearby factory. Reports were confirmed that UN observers were allowed to check on their welfare.

President Clinton met the previous night with half a dozen Senate leaders. Georgia Democrat Sam Nunn left the White House dangling a carrot for Milosevic, saying in effect, that if his (Milosevic’s) government would cooperate in cutting off the kind of equipment and supplies that were fostering the ongoing violence there, then the U.S. would consider easing the embargo that had caused so much devastation to the Bosnian economy. The Senate leaders expressed approval of Clinton’s handling of the situation by not jumping into something that would be ultimately difficult to get out of.

And over in Russia – Boris Yeltsin called a Special Assembly of regional leaders in June to pour a new legal foundation for the Russian government. It was Yeltsin’s way of ending gridlock with the Communist-era Parliament.

And that’s just a small slice of what went on, this rather hectic May 12th in 1993, as presented by The CBS World News Roundup.