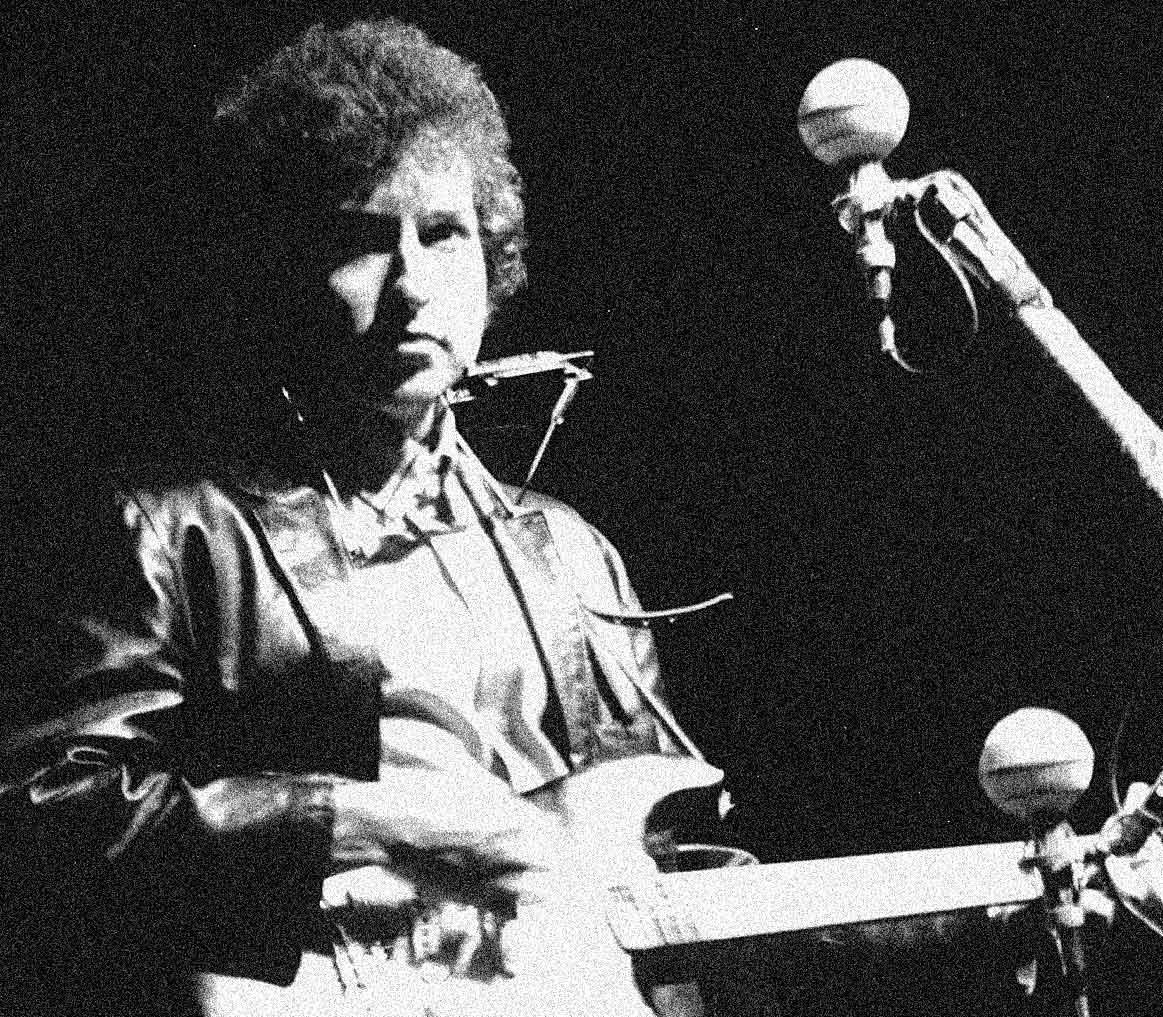 (Starting this week, we’re adding occasional guest editors who have spoken about favorite concerts and were asked to write about them – This week it’s Pete Tesoro – give him a nice round of applause!)

On the evening of July 25, 1965, a crowd of about 17,000 adoring fans gathered for Bob Dylan’s closing performance at the Newport Folk Festival. However, many in the audience were stunned when he took the stage with a full backup band and an electric guitar. The short, but “loud” set that followed provoked boos from the crowd and even criticism from the folk music establishment.
“Like A Rolling Stone” Dylan’s latest single, a full-blown “electric” song, released a few weeks earlier, and had made its debut on L.A. radio station KRLA’s Tunedex on July 17 at Number 5! The following week, July 24, the day before his Newport electric performance, it was in the #1 position on KRLA, and would remain there for six weeks! It was likewise at the Number One position on L.A.’s 93KHJ Radio and KFWB on July 28. It had also been climbing the charts throughout the country for a few weeks. So, the song was already being heard on the radio by the time of Newport, but Dylan had yet to perform it with a live band. So, as far as Dylan’s “folk” fans at Newport were concerned, he was still a solo folksinger.
Ironically, back in March, four months earlier, Dylan’s album, Bringing It All Back Home, had been released, featuring full-out rock on side one, with the wildly powerful album-opener “Subterranean Homesick Blues”. So, really, should the Newport crowd have been surprised or “shocked” at his opening song that night, “Maggie’s Farm”, also featured on Bringing It All Back Home?
After being introduced by Peter Yarrow of Peter, Paul and Mary, Dylan came onto the stage carrying a Fender Stratocaster electric guitar and wearing a leather jacket. As the “confused” audience looked on, Dylan and band, including Mike Bloomfield and Al Kooper (both playing on the “Like A Rolling Stone” single) powered to life with a very “electric” rendition of “Maggie’s Farm”. A very animated Mike Bloomfield, playing electric lead guitar started the song with a strong opening riff. Then Dylan sang the opening lyrics, “I ain’t gonna work on Maggie’s farm no more!”
The song’s aggressive tempo and Bloomfield’s powerful guitar hit the audience like a shockwave. Some cheered, but a significant portion began booing, and the outrage only grew worse after the band went into the next song, “Like a Rolling Stone.” As Dylan and band continued, some of the crowd erupted with jeers and booing.
Just before the third electric song, Dylan can be heard, off-mic, calling out “Phantom Engineer” (the original title of “It Takes A Lot To Laugh, It takes A Train To Cry”) to the band. After finishing the song, Dylan can also be heard off-mic telling the band “OK, let’s go man, that’s all?” Surprised, one of the band members replies, “That’s it”? – clearly indicating that more songs had planned on being performed.
However, in a desperate effort to calm the crowd, Peter Yarrow came back on stage, assuring the crowd that “Bobby has gone to get his “ACOUSTIC guitar”, seemingly pleading for Dylan to return to the stage to play what the crowd wanted to hear.
So, Dylan returned, and played solo, acoustic versions of “It’s All Over Now, Baby Blue” and “Mr. Tambourine Man”, the latter being called for by someone in the crowd, to which Dylan, now in a very co-operative spirit, replied, “Ah, OK.”. Clearly unprepared for this, Dylan now asks the audience, “Does anyone have an ‘E’ harmonica, an ‘E’ harmonica? – ANYONE. Just throw them all up.” The sound of a few harmonicas hitting the stage floor can then be heard.
Just how hostile the response really was—and why—has become a matter of considerable debate ever since. Many witnesses, Pete Seeger included, maintained that the booing was due more to the poor sound quality than the shock of seeing Bob Dylan playing an electric guitar. The audio mix over the loudspeakers at the outdoor venue was apparently not good, with Bloomfield’s guitar turned up so loud that it drowned out Dylan’s voice. “I was furious that the sound was so distorted, you could not understand a word that he was singing,” Seeger later said. Yet, regardless of these reports, once Dylan returned to the stage with his “ACOUSTIC” guitar, the applause was thunderous, compared to the polite, meager applause heard after each electric song he performed.
The controversy would continue to haunt Dylan when he went on tour a month later. His shows, which now included both an acoustic first and then an electric set, were often met with boos during the electric set. In fact, his next concert, on August 28th at Forest Hills Tennis Stadium, in New York City, was met with outrageous booing after each electric song. The booing simmered down a little at Dylan’s next concert, September 3rd, with the much more tolerant crowd at the Hollywood Bowl. However, the booing picked up again, with rare exception, as his tour continued. Dylan regularly commented on this when asked about it, in subsequent interviews, even commenting at one, “I mean, they must be awful rich, man, to pay money to go boo somebody.” Dylan would eventually, occasionally respond somewhat aggressively with the booers on the European leg of his spring 1966 tour, even challenging one member of the audience to “come up here and say that.”
The bottom line, however, is this: Dylan’s next album, Highway 61 Revisited, released about a month after the Newport Folk Festival event, was hailed as an instant classic, going all the way to #3 on the Billboard “Top Pop Albums Chart”, and “Like a Rolling Stone” became his first hit single going to #2 on the Billboard charts. By the time his album Blonde On Blonde was released in May 1966, many former critics were forced to admit that Dylan’s “electric” sound was pretty darn good.

FOOTNOTE: As to the September 3, 1965 Hollywood Bowl concert, my wife, as a then-15-year-old teenager, happened to attend this concert. When she read my notes here on Past Daily, she asked me: “How do you know what the booing was like at the Hollywood Bowl, since you weren’t there, and I was?” I told her I had read reports, and then asked her: “Well, what about the booing?” She said: “Yes, there was booing, but those of us who liked the electric stuff drowned ‘em out!” An interesting side note on this is that, my wife’s initial exposure to Dylan was the “Subterranean Homesick Blues” single, which she loved. That, along with the then-just-released “Like A Rolling Stone” single was the reason she went to see Dylan at the Bowl in the first place; so, she asked her older brother if he could get tickets for the concert. Her brother, who had a few connections, got the tickets, one for him and one for her. She says he was from the Sinatra era, and therefore spent nearly the entire concert on at the pay phone! Getting back to the relevance of her part of the story, although she liked the acoustic first half of the concert, she was surprised that he initially came on stage with just himself and his guitar. She had no idea that he had been anything of any note before “Subterranean Homesick Blues”. She did not know, at the time, that Dylan had written “Blowin’ In The Wind”, Don’t Think Twice, It’s All Right”, It Ain’t Me, Babe”, “Mr. Tambourine Man”, etc., etc. She was thrilled when Dylan came out for the second half of the concert with a band, and launched into the second half “electrically”. In fact, she couldn’t understand the booing, since she thought the this electric stuff was wonderful. Thus she, and others cheered all the louder, and, as she said, “we drowned ‘em [the booers] out.”
P.S. If there is a call for it, more Dylan will be forthcoming…