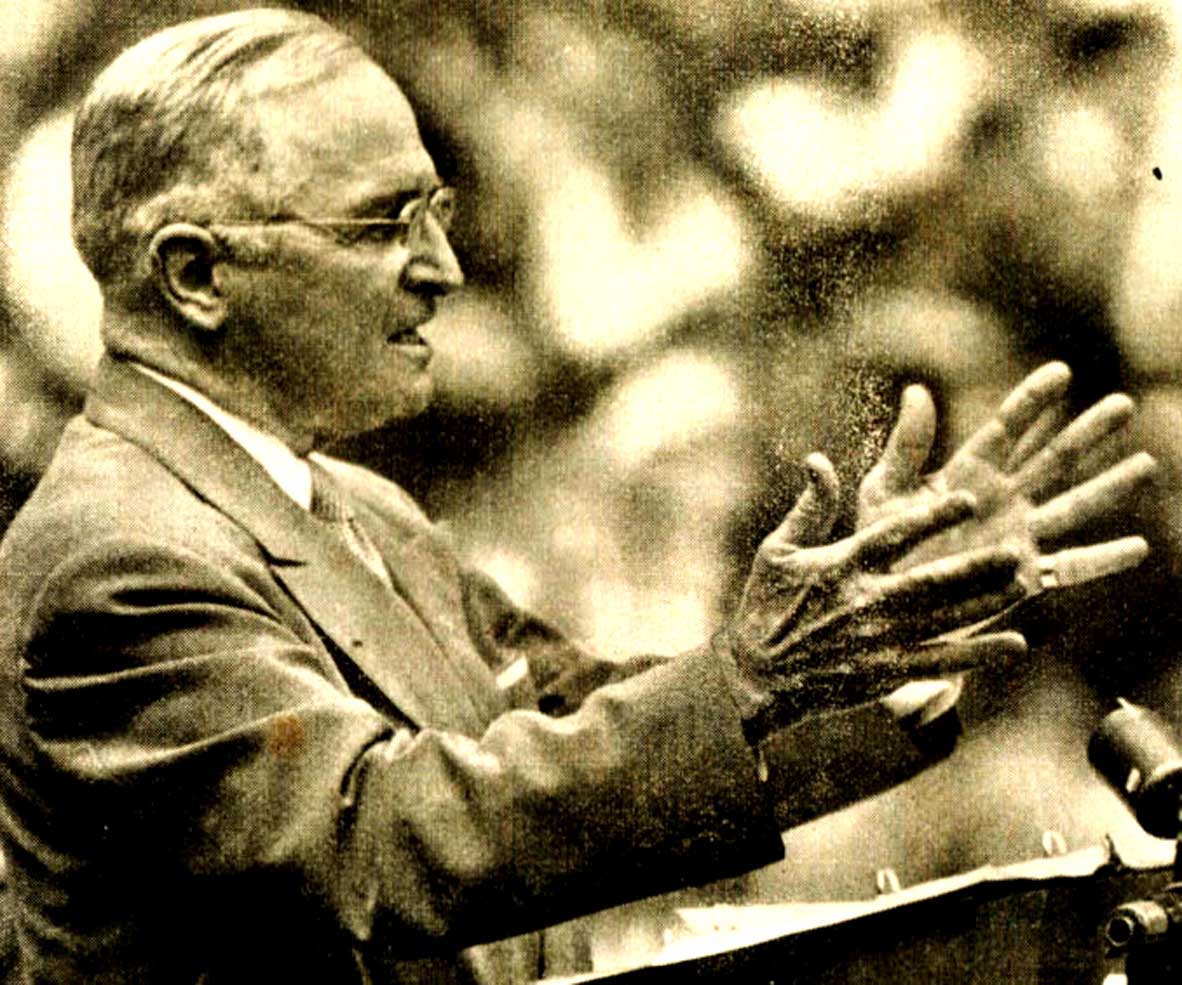 President Truman - Looking for solidarity in an off-year election.

President Truman – Looking for solidarity in an off-year election.

1950 was an off-year election. But following the legendary “do-nothing 80th Congress”, the 81st Congress was a step in the right direction, and it was up to The President to make sure it continued that way. So, during the Jefferson Jubilee, celebrated in Chicago at the Democratic Conference, President Harry S. Truman called for a “rally of the troops” as it were, and gave an upbeat assessment of country:

President Truman: “You often hear it said that the Democratic Party is unfair to business, is taxing it to death, and has taken all incentives away from private enterprise. A great deal of propaganda is issued to try to make you believe that private initiative and private profit are on the last mile to extinction. But what are the facts ?

In 1949 corporate profits, after taxes, were double what they were 10 years ago. In 1949 industrial production was 60 percent more than it was in 1939. In 1949 new investment in plant and equipment for business purposes was more than double what it was 10 years ago. These increases are in terms of real income, not just dollars. If it was in dollars it would be a lot bigger.

Business was never so productive, vital, and energetic as it is today. All this talk about weakening private enterprise is sheer political bunk.

One of the reasons why business is strong and prosperous is that the income of the average American family has greatly increased in recent years. Since 1939 the real income of the typical wage earner’s family has gone up 50 percent.

The same kind of progress has been made by farm families. Their real incomes have risen as much as those of the wage earners.

All groups in the economy have made progress together: businessmen, wage earners, and farmers have been moving steadily forward. We have all shared in the economic progress of the Nation. Why, they even raised the salary of the President!

It is not enough simply to stand still-merely to hold our own. In this great Nation of ours, with its vast wealth of resources, we can have–and we should have–a constantly improving standard of living for everybody.

Now, the Democratic Party is planning ahead to achieve that goal. We have a program–a definite, positive program–for increasing our national welfare. We propose to build upon the experience of the last 17 years and strengthen the measures that have so thoroughly proved their worth during that period.

Our program is founded firmly upon the proposition that it is the duty of the Government to serve all the people–not just the privileged few.

In trying to get this program through the Congress, we have met strong opposition from various oddly assorted groups. In many cases we have successfully overcome this opposition. In others, we have not overcome it–at least, not yet. But we will keep up the fight, and I think we will be successful before long.”

That’s what it was looking like in May of 1950. The names and the situations change – the politics, not so much. Ironically, we would be plunged into the Korean War a little over a month later, on June 25th of 1950.

Here is that address, as it was given by President Harry S. Truman on the night of May 15, 1950 and carried nationwide via Radio.