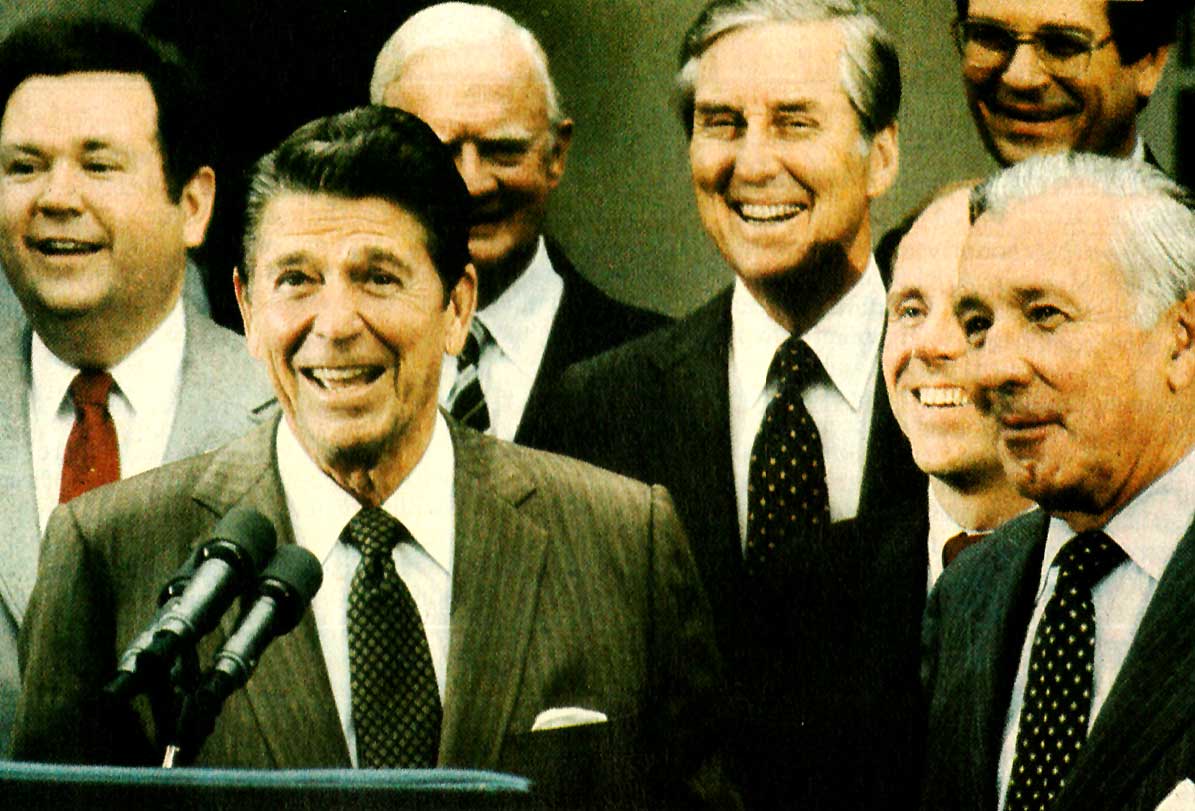 Pres. Reagan and Capitol Hill leadership - all smiles . . at least for the cameras.

Pres. Reagan and Capitol Hill leadership – all smiles . . at least for the cameras.

June 1, 1981 – a day of politicking. On Capitol Hill it was about the Reagan budget, the tax cuts, the defense spending and where was all the money going to come from. On this day it was talk about a compromise Tax Cut plan as five Democratic Congressional leaders called on President Reagan to talk about that Tax Cut. Mr. Reagan was reported to have said nicely that they (the five leaders) will lead the mainline Democrats into a compromise Tax Cut plan; his tax cut plan compromise, not theirs. Observers from the White House felt Reagan had the necessary vote strength in the House; a solid Republican lineup and the necessary number of conservative Democrats, those who supported the Reagan budget cuts, to make it happen with or without their (the Congressional leaders) support. Although many Democrats, fearing the inflationary affects of these tax cuts, wanted smaller reductions for a year. The Administration, looking for the tax cut to stimulate the economy, wanted a three-year cut; 10% a year, and were willing to compromise on 5% the first year and 10% for the rest. The Democratic leaders coming for talks had to take into consideration the political count – to see if they could call the President’s hand.

Meanwhile overseas – reports coming were calling it Beirut’s bloodiest weekend since the end of the civil war six years earlier. Fighting flared up on Saturday, roared all through Sunday and finally quieted down by Monday morning, but according to several sources, it wasn’t really over yet. At last count, some 20 were killed and over 270 were wounded since the start of the weekend.

And an assassination in Belgium claimed the life of Naim Khadar, the PLO‘s chief representative in Brussels. Khadar was gunned down on the steps of his apartment house as he was leaving for the PLO offices just a few hundred yards away. A gunman fired five shots at Khadar who was rushed to a hospital and died of his injuries. The killer escaped and Brussels police launched an immediate manhunt for the gunman. The PLO issued a statement, blaming Israeli agents for the killing. The Israeli embassy in Brussels countered with a sharp denial, saying that PLO splinter groups were known to carry out other attacks on PLO representatives in the past.

And that’s just a small slice of what went on June 1, 1981, as reported by The CBS World News Roundup and the CBS Hourly news.