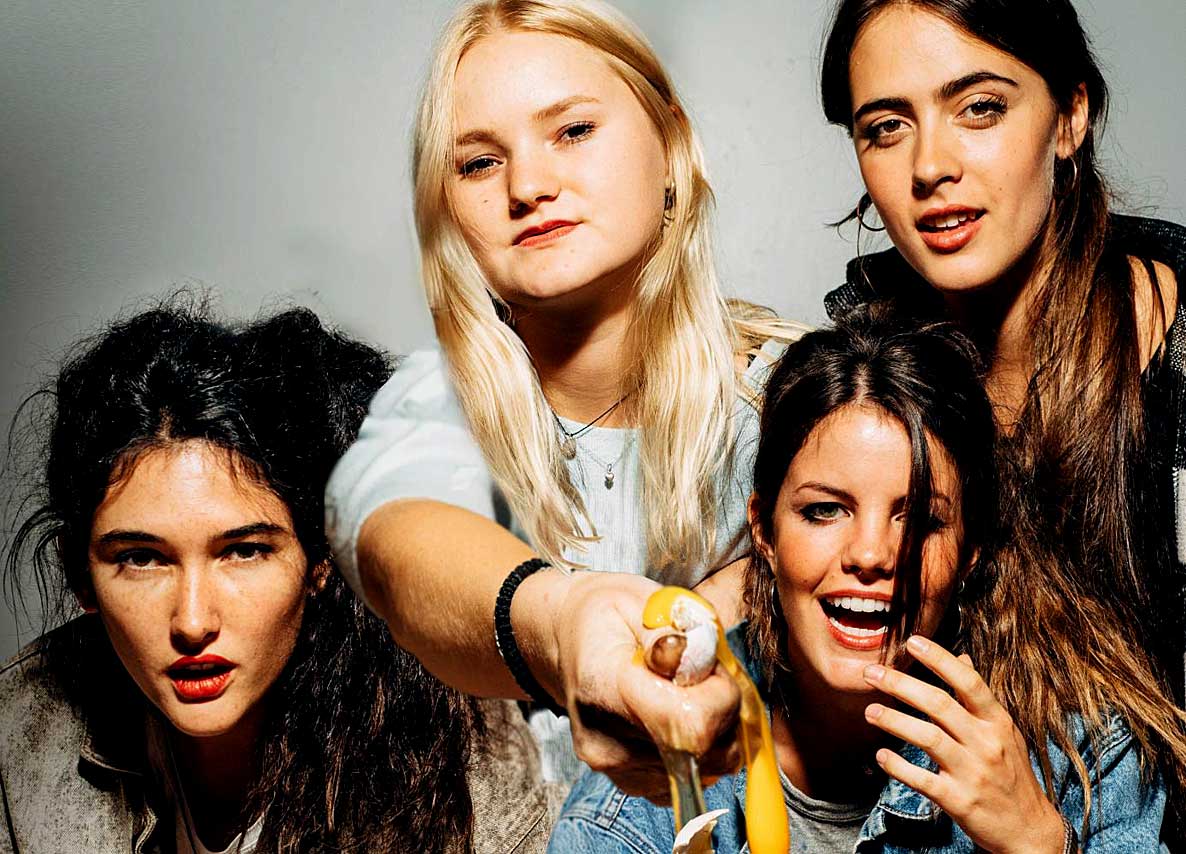 Hinds - The girls from Madrid America can't seem to get enough of. (photo: Mike Massaro)

Hinds – The girls from Madrid America can’t seem to get enough of. (photo: Mike Massaro)

Hinds, the 4-piece quasi-Garage/neo-Punk/raucous Girl-Group from Madrid has America in the palm of their hands. Since they started getting noticed all over Europe a few years ago, they’ve made stabs at the U.S. and the U.S. has responded in kind with raves and has taken this Band of Spanish Lo-Fi very much to their collective hearts.

Previously known as The Deers, they changed their name early in 2015 and it’s been a blast every since. Tonights Soundbooth, a 9 minute excerpt from the complete concert at the PitchFork Festival in Paris, comes just prior to the release of their debut album “Leave Me Alone”, which would come out this past January.

Since then it’s been nonstop touring – and from the looks of their website, the non-stop touring is continuing, at least until September. Hitting most of the festivals in Europe starting in late June, they are finishing up a swing through the U.S. as well as appearing at the Foro Indie Rocks festival in Mexico City on the 16th and Levitation Vancouver on the 18th and on the 29th play Roskilde in Denmark.

Busy schedule, all pointing to a very successful introduction to a band from Spain. Further evidence the playing field is world-wide and has been that way for a few years now. Lucky us, at last.

Thank the internet, thank streaming radio carrying live concerts, thank wall-to-wall video coverage of festivals and thank festivals for booking diverse and interesting acts that are making discoveries an instant and accessible thing – something that never would have happened even 5 years ago.

For all that some people complain about the current state of Pop music – the complaints, I suspect, are directed at the Mainstream, which most people realize, has stopped being relevant and no longer a place where new music is discovered (if we ever were), the fact that we’re plugged into bands gigging around Europe, streaming soundboard appearances and getting their own messages across points up to a pretty exciting time for new music in general. We are now in a place where the floodgates have opened and we’re no longer content to hear the restrictions imposed by top 10 or 20 bands from your own country and no place else (we’re talking about the U.S. here – Europe has been all over the map for decades). You are also able to follow a band through their beginnings (as we did when we first heard The Deers in 2011) and hear for yourself the progressions and the direction changes.

However you feel about Hinds (and there are a lot more people who love them than don’t), the fact that we get to hear them at the same time as everyone else, and hear them in a context we simply weren’t able to before is huge and exciting.

And the Summer Festival season is just getting started – Yay us! Stay tuned and keep an open mind.