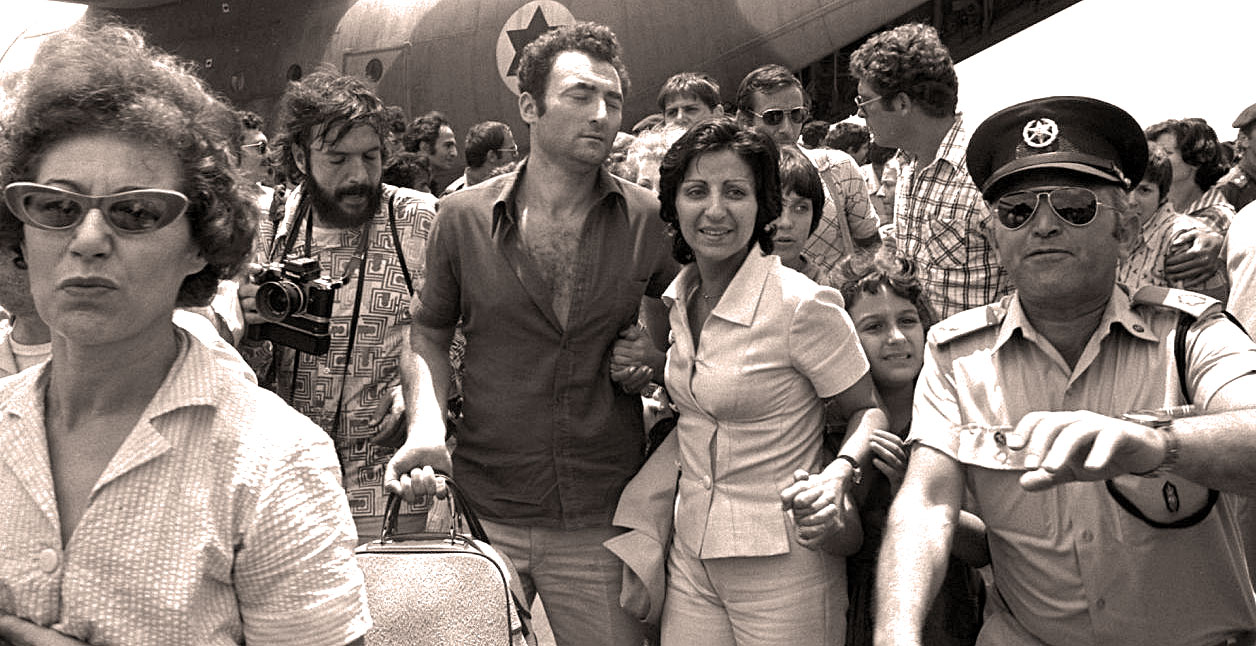 Freed Hostages from Entebbe – July 6, 1976 – The raid could have gone either way.

In what was described as one of Israel’s most daring raids to rescue hostages, the raid at Uganda’s Entebbe Airport in order to rescue some 284 passengers, held captive on a Tel-Aviv to Paris bound Air France jet, was regarded as a smashing success.

Dogged with problems, owing to hasty planning and foulups, the raid could have bogged down at any time, and the loss of life would have been substantial. But the raid was carried off with surprising precision, and the operation became an enormous embarrassment to the Ugandan regime of Idi Amin, who had condoned the hostage taking and the scene at Entebbe Airport in the first place.

Initially, the hijackers; two members of the Popular Front for the Liberation of Palestine, hijacked the plane and demanded the immediate release of some 40 Palestinian militants, held in Israeli prisons. The Hijackers separated the Israeli passengers from the non-Israeli passengers – sending the 148 non-Israelis on to Paris but keeping the remaining 94 passengers.

It was learned, through intelligence sources, that the hijackers were planning on killing the remaining passengers and Air-France crew if the demands weren’t met.

This prompted the plan to free the hostages and the long-distance undertaking.

The raid took place during the evening of July 4th, with 100 IDF commandos. The end result was the rescue of all but 3 hostages. Among the casualties were all the hijackers as well as some 45 Ugandan soldiers. Of the Commando casualties; five were wounded and one, the older brother of Benjamin Netanyahu, Yonatan, was killed.

The raid was a huge embarrassment for Uganda who, in addition to losing troops, also lost some 30 Ugandan Air Force fighter jets.

News of the Entebbe raid and its success had been held back until the hostages were safely returned. It was a major news event of the day, in which other news was also going on. Aftermath of an unsuccessful coup in Sudan and controversy over Chinese athletes in the upcoming Summer Olympics.

All that, and much more as reported in this Shortwave broadcast from the World Service of Radio Nederland in Hilversum Holland. A glimpse of what the International press were covering on this particularly day. Excuse the noisy recording – it’s what shortwave radio sounded like 40 years ago – decades before streaming.