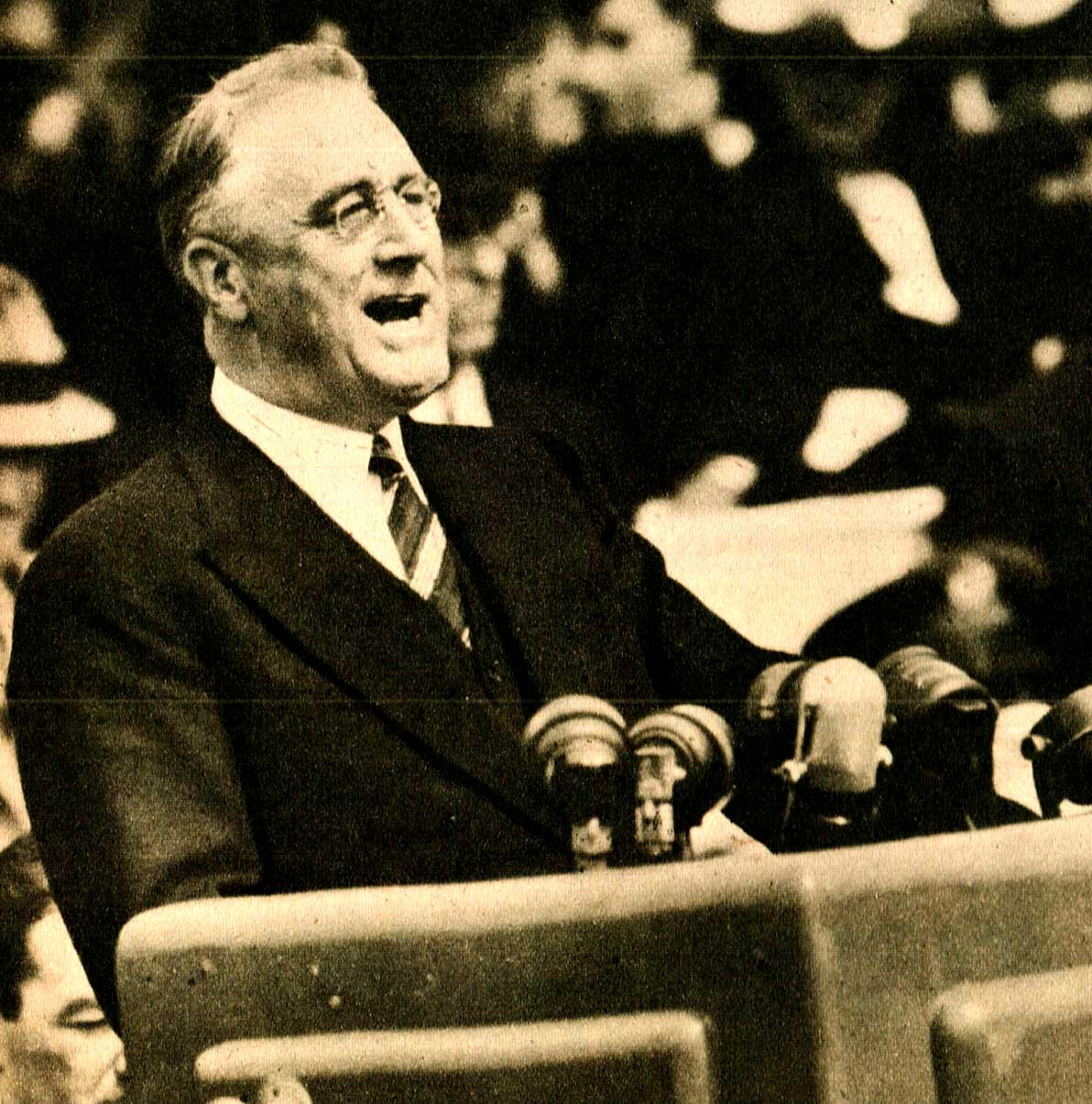 FDR - Accepting the nomination for a 3rd term.

FDR (address via Radio) – Accepting the nomination for a 3rd term.

On July 18, 1940 President Franklin D. Roosevelt addressed members of the 1940 Democratic convention and accepted their nomination of him for President for an unprecedented third term. His nomination went quickly, having won on the first ballot, handily beating out two other candidates, Postmaster James Farley and for vice-President John Nance Garner.

For a running mate, FDR chose Secretary of Agriculture Henry A. Wallace. Despite some opposition, most notably from the more conservative wing of the party, who thought Wallace’s views were radically to the left, the party fell in line and the 1940 Roosevelt/Wallace ticket won by a majority of 86%.

President Roosevelt addressed the convention delegates via radio, from the White House:

President Roosevelt: “When, in 1936, I was chosen by the voters for a second time as President, it was my firm intention to turn over the responsibilities of Government to other hands at the end of my term. That conviction remained with me. Eight years in the Presidency, following a period of bleak depression, and covering one world crisis after another, would normally entitle any man to the relaxation that comes from honorable retirement.

During the spring of 1939, world events made it clear to all but the blind or the partisan that a great war in Europe had become not merely a possibility but a probability, and that such a war would of necessity deeply affect the future of this nation.

When the conflict first broke out last September, it was still my intention to announce clearly and simply, at an early date, that under no conditions would I accept reelection. This fact was well known to my friends, and I think was understood by many citizens.

It soon became evident, however, that such a public statement on my part would be unwise from the point of view of sheer public duty. As President of the United States, it was my clear duty, with the aid of the Congress, to preserve our neutrality, to shape our program of defense, to meet rapid changes, to keep our domestic affairs adjusted to shifting world conditions, and to sustain the policy of the Good Neighbor.

It was also my obvious duty to maintain to the utmost the influence of this mighty nation in our effort to prevent the spread of war, and to sustain by all legal means those governments threatened by other governments which had rejected the principles of democracy.

Swiftly moving foreign events made necessary swift action at home and beyond the seas. Plans for national defense had to be expanded and adjusted to meet new forms of warfare. American citizens and their welfare had to be safeguarded in many foreign zones of danger. National unity in the United States became a crying essential in the face of the development of unbelievable types of espionage and international treachery.

Every day that passed called for the postponement of personal plans and partisan debate until the latest possible moment. The normal conditions under which I would have made public declaration of my personal desires were wholly gone.

And so, thinking solely of the national good and of the international scene, I came to the reluctant conclusion that such declaration should not be made before the national Convention. It was accordingly made to you within an hour after the permanent organization of this Convention.

Like any other man, I am complimented by the honor you have done me. But I know you will understand the spirit in which I say that no call of Party alone would prevail upon me to accept reelection to the Presidency.”

Here is that entire address, as it was delivered on the closing day of the 1940 Democratic Convention, held in Chicago on July 18,1940.