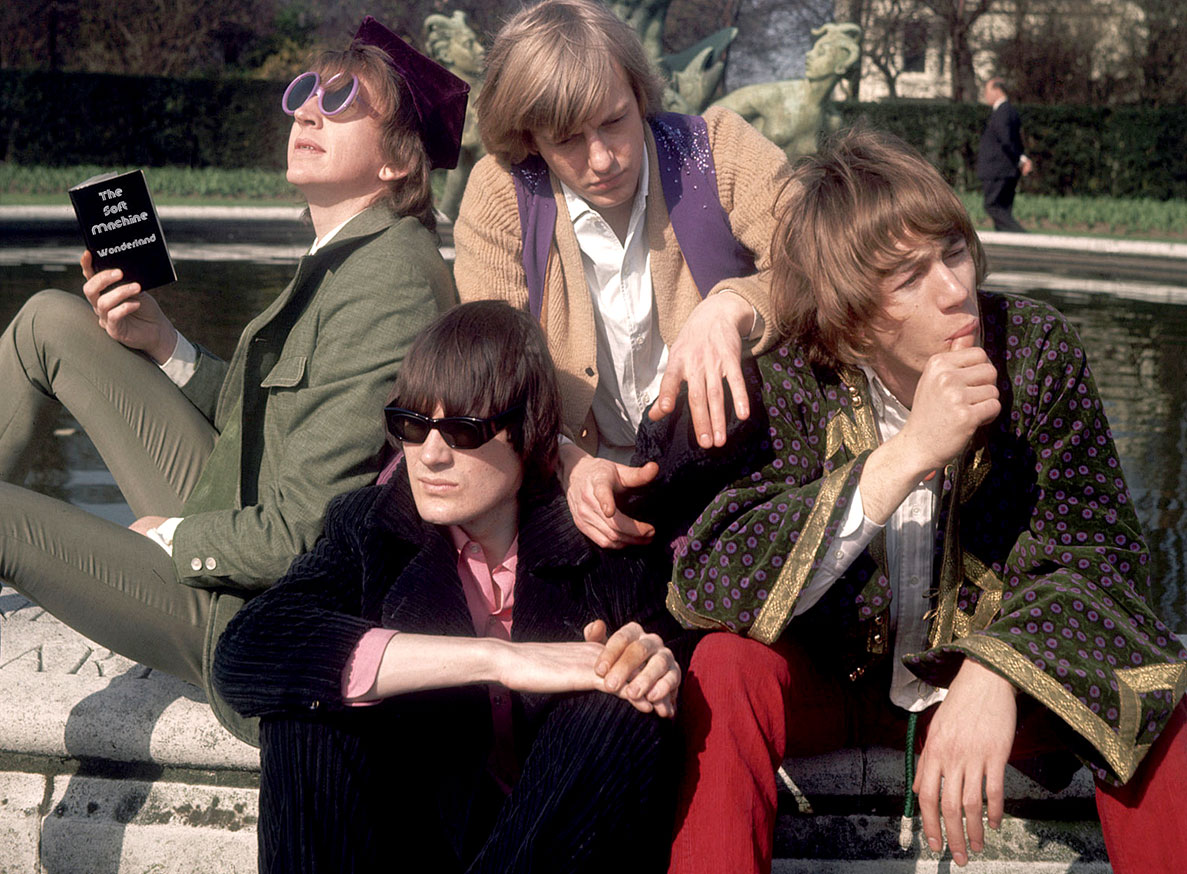 Soft Machine - personally, a life-changing band (btw: Daevid Allen, top-row left, had since gone off to form Gong by the time this session happened).

Soft Machine – personally, a life-changing band (btw: Daevid Allen, top-row left, had since gone off to form Gong by the time this session happened).

Soft Machine – in session for French TV-Radio (RTL or ORTF), and recorded on August 25, 1968. The first time I saw Soft Machine, they were opening for Jimi Hendrix at the Shrine Auditorium in Los Angeles. I remember sitting stunned, completely absorbed in this remarkable three-piece band, playing music that completely clicked with me – it was the music I was always imagining hearing, but was hearing it up-front and for real. It opened up a whole new world for me and I wanted to hear more. Psychedelia was already a solid part of the music scene by 1968 – Soft Machine represented the next logical step. It made perfect sense that Hendrix insisted the band open for him – they felt cut from the same cloth. And it was because of Hendrix that they made a huge impression on audiences in the U.S.

And even though Soft Machine never made it as a commercially viable band, they were enormously influential, not only to Psych but to the emerging Progressive genre that happened a few years later. Because they were so popular in Europe, and because Daevid Allen, who was a founding member of the band, left to form Gong and became a solid fixture in the French music scene – the influence was greater and they became akin to a Ground Zero for the new music in the months ahead.

So it’s only natural that this session comes from Paris, a city only too familiar with Soft Machine. A few months after this session, the band would go on hiatus (actually they split, leaving drummer Robert Wyatt to explore New York for a while), and with founding members dropping out and going their own ways – Kevin Ayers embarking on a solo career – Daevid Allen giving us Gong. It pretty much left keyboard player Mike Rattledge as the sole member, until Wyatt came back and a new Soft Machine was put together, and a new musical era to go along with it.

Soft Machine are still with us – primarily in name only as Soft Machine Legacy. The directions have changed considerably over the years and they have made forays into Jazz-Fusion and Free-Jazz, a far cry from their experimental/psych/pre-Prog stage. But still, there are glimmers.

For those of you who remember that early incarnation, and the wild experiments that took place on stage and in the studio, this session will bring all that back. If you’ve only heard about the band, don’t really know anything about them and never got to hear them live the first time around, this might give you an indication of what it was all about.

I have always been grateful to have found them. I often wonder what would have happened if I hadn’t.