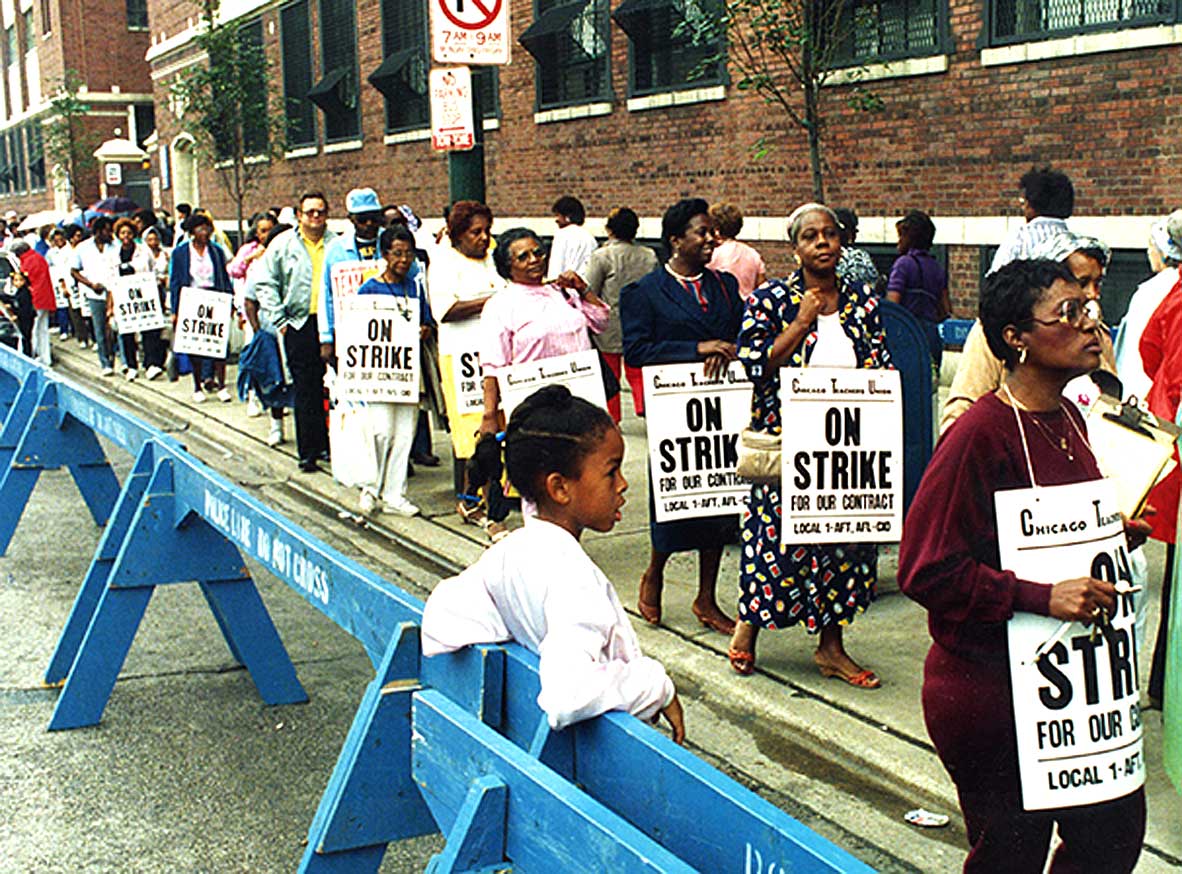 Chicago Teachers Picketing - Summer was over.

September 8, 1987 – Summer vacation was over and the picket lines were forming in Chicago as negotiations between Teachers and the School District were in limbo, with virtually no chance of a settlement before the scheduled opening of classes the following day. The Chicago walkout promised to add 430,000 students to the 266,000 others already affected by walkouts and picket lines in Michigan, Pennsylvania, Ohio and Washington state. It would be the tenth time since 1969 that the Chicago Teachers had struck; the fourth time in the previous five years. With them were the 12,000 other members of the 20 other unions that maintained the buildings, the equipment and fed the students. The Unions were counting on that kind of power to insure what they called a modest pay increase. This against the Illinois Legislature imposing a hard fiscal discipline on the Chicago School Board. From the looks of it, the strike was facing a long haul – some thought possibly until Christmas, and the picket lines were digging in. Maybe Summer vacation wasn’t over after all . . .

Meanwhile, weather was a subject for optimism in the West, as much needed rains were bringing relief and joy to the thousands of people evacuated from their homes in and around the Sierras. Some nearly 2,000 blazes were started when a series of lightning strikes hit the drought stricken area the week before.

Jury selection was getting underway for the trial of four White youths charged with attacking three Black men in the Howard Beach section of Queens New York, and chasing one man to his death, struck by a car as he ran out on to a highway. The case had become a national symbol of racial strife and injustice happening around the country. The case drew fire from many Black leaders who accused the Police and the District Attorney of covering up the incident. A Special Prosecutor was appointed and 12 White teenagers were indicted. The four slated to go on trial faced murder or manslaughter charges. The Special Prosecutor vowed to try the case like any other, saying allegations it was a race-case were untrue.

And that’s a small slice of what went on, this September 8, 1987 as presented by The CBS World News Roundup.