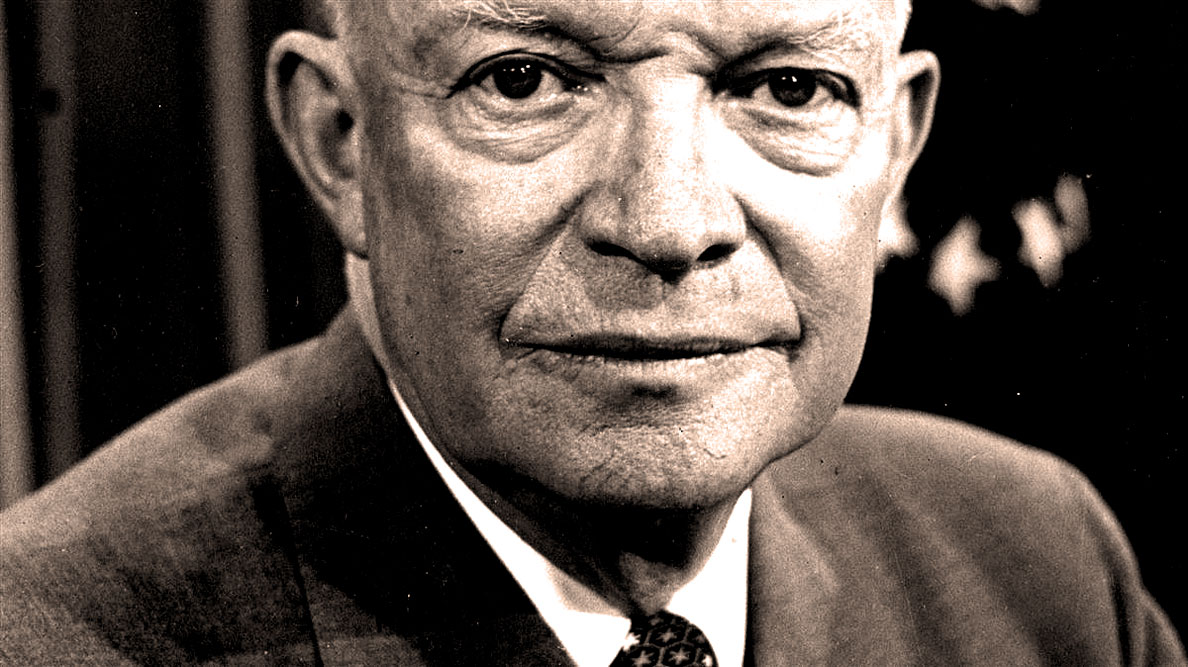 President Eisenhower - A reminder that 1953 wasn't that long ago, and that the GOP were a whole different party then.

President Eisenhower – A reminder that 1953 wasn’t that long ago, and that the GOP were a whole different party then.

President Eisenhower addresses a Fundraiser held in Boston on September 21, 1953. With the current election season heading to the final few weeks, begin reminded that Political Parties in America have changed dramatically over the years; none probably as much as the GOP. President Dwight D. Eisenhower was a popular figure even before he entered the Presidential race in the 1952 election. A highly respected General and war hero, who led Allied forces in the invasion of Europe in June of 1944, Eisenhower was courted by the GOP as far back as 1946 to make a run for the White House on the Republican ticket. Dubbed the “Forward To 54” dinner, it was a fundraiser for Republican candidates during a coming off-year election.

But more than that, there is a tone and a conviction that seems missing from our current Presidential race. Needless to say, the GOP have undergone massive changes in the ensuing 63 years since that dinner. But it’s good to be reminded that our current state of political insanity is new – it has NOT always been this way.

Here is a printed excerpt from the complete address by President Eisenhower, which you can hear on the player above:

President Eisenhower: “We, who shall shortly be celebrating the 100th Anniversary of that party that came so to birth, find ourselves, too, living in a time dark with the shadow of dreaded war. It is a time, too, which has seen an institution of slavery–now elevated to the awful dignity of a political philosophy and inspired with the terrible ambition of world conquest–divide not a nation, but the world, against itself. And at this precise time again there has come the summons of the American people calling upon the Republican Party to redeem the hopes of the past and to save the promise of the future.

The circumstances of this anniversary, then, call for much more than the oratory of self-congratulation. They call for more than any display–however justified–of partisan pride. For even as we meet as Republicans, our minds are troubled by problems and stirred by sentiments far transcending the self-interest of a political party. Our hearts are filled with concern for the welfare and the safety of our country. Such concern instantly and inevitably involves attention to the strength and security of the whole free world. We therefore see our Party not as an end in itself but as a magnificent means–a means through which countless thousands of devoted citizens can cooperate in the conquering of problems that beset free men everywhere. I believe, therefore, you will agree that my duty as President is to address you, not as partisans, but first, and above all, as patriots of America and citizens of the world.

In this spirit, I suggest that there is one particular and indispensable way in which each one of us can take part in this Republican Centennial. This way has none of the color of a fireworks display, none of the thrill of a political convention. It is a simple matter of faith and purpose: to define clearly and honestly, in our own minds the kind of political party in which we believe and which we propose to maintain.

To do this is, of course, not simple at all. It is to define the political institution to which our energies are dedicated–and upon which can depend even the future of freedom itself.

What I presume to suggest to you, I cannot, of course, myself evade. As your guest this evening, I have accorded myself the privilege, therefore, of addressing aloud to you some of my own thoughts on the Party in which I believe.

It is logical to look for the clearest marks of a Party in its record in office. The record of the present Administration is too short to be anything like definitive. But the facts that are plain are also indicative of deeply held ideas of the widest meaning. There are, already in this record, these facts:

We have observed and practiced true bi-partisanship in international affairs, believing that no matter what domestic differences can create and animate parties at home we must present a substantially solid American front to all with whom we deal abroad.

We have seen a cessation of fighting in the Korean War, giving us relief from the pain of casualty lists and allowing us to work more effectively for the nation’s security against threats originating anywhere in the world.

We have given to the world the clearest testimony to our firm allegiance to the common cause and needs of free peoples everywhere. We have sent shipments of wheat to Pakistan, medical and reconstruction supplies to Korea, food to Berlin. We have promised that our country will welcome tens of thousands of refugees from the terror of enslavement in lands of darkness. Recognizing that neither freedom nor safety can be found by any one nation alone, we have continued to build coalitions to promote, on a cooperative basis, the security of all.

We have lifted stifling artificial controls from our economy, counting upon the American genius for creative initiative to advance the frontiers of our prosperity beyond the hopes of past generations.

We have simplified customs regulations. Knowing that materials from abroad are as vital to our economy as foreign markets to receive our goods, we have initiated a review of our entire tariff policy. This looks toward the encouragement of greater and more equitable trade among all free nations. To permit time for this, the Congress extended the Reciprocal Trade Act.

We have used the legitimate and necessary authority of the Federal Government to steady farm prices, meanwhile blueprinting the extension of social security coverage to more than 10 million unprotected citizens.

Dedicated to the fullest use of the nation’s resources for the welfare of all, we have redefined policy on public power to assure the maximum of local participation and decision in projects that require the partnership of national, state and local governments.

We are continuing to study and will submit to the next session of the Congress, recommendations for making more secure our industrial peace and productivity, more clear and explicit the rights of labor, its unions and its employers.

We have undertaken with determination the work of cleaning up governmental operations, and have made extraordinary progress with this job that so badly needed doing. We have reorganized more than half a dozen major departments and agencies of the Federal Government. The introduction of top business management methods into governmental activity–while it may be painful to some–is proving its worth daily in greater efficiency and lowered costs.

We have, in our respect for priceless civil and human rights, used the Federal authority, wherever it clearly extends, to erase the stain of racial discrimination and segregation. We are making certain that every government employee is a loyal American. But we have opposed the confusing of loyalty with conformity, and all misguided attempts to convert freedom into a privilege licensed by censors.

These are some of the deeds of this Administration which serve as witnesses to some of the truths we hold. They are eloquent enough, perhaps, in certain areas. But many are little more than fragments. They suggest rather than define the character and purpose of those who support or who belong to the Republican Party.

If we turn from the legislative record of one Congressional session to the Party history of a hundred years, we learn more that is indicative–and yet little that is conclusively clear and binding upon us today.

The fact is not surprising. A century of history records the changes in institutions: it does not fix their mold. And this was a century of shattering change: from before Bismarck to after Hitler, from the Third French Empire to the Fourth French Republic, from Disraeli to Churchill, from Tsar Nicolas I to Malenkov.

Over such a span of time, the only perfectly consistent institution was a dead institution. And the Republican Party was–and is–very much alive. A fact easily forgotten is that through all those years–from the first year of War Between the States in 1861 to the first year of the New Deal in 1933–the Republican Party was in office three-fourths of the time. It helped mold each age and was itself molded by each age–the extremist Party in one day, the champion of something called “normalcy” in another. With America and with the times, it restlessly changed; sometimes growing, sometimes faltering, sometimes partially divided–in short, behaving like a normal, healthy political party in a vital, thriving Republic.

The ascendancy of the Party through the great part of this great century is the clearest answer to the feeble but persistent myth that the Republican Party is simply a conspiracy against change. The century abounds with such answers. They begin with the Emancipation Proclamation. And they continue:

In the 1860’s and ’70’s: the Thirteenth, Fourteenth and Fifteenth Amendments; the purchase of Alaska and the Midway Islands; the First Homestead Act;

In the 1880’s and ’90’s: creation of the Civil Service Commission; the Sherman Anti-Trust Act; the declaration of the Open Door Policy in China; the first Inter-American Conferences; the beginning of a national conservation program with the establishment of the first national forests;

And from 1900 to the 1930’s: establishment of a Department of Labor and a Department of Commerce; the Pure Food and Drug Act; the strengthening of the Interstate Commerce Commission; the breaking of the great trusts; the first Bureau of Housing in the Federal Government; the first gigantic multiple-purpose dam; the model Railway Labor Act; the Kellogg-Briand Pact; the creation of a Federal Power Commission.

These deeds are the record of a Party that has grown as America has grown–seeing and meeting its needs, its responsibilities, and its aspirations. It fears change no more than it fears life. It knows that the two are one and the same.

Now, my friends, from all this we learn one truth: the living definition of this Party, at this moment in our history, is not to be found in the fine print of a legislative record, nor beneath the dust of our historic archives. It can only be found in our own hearts and minds. Born of change–born to change–this Party is and it will be what we make it.”

So much has changed since then – and not for the better.

But that’s just my opinion.

Here is the entire address by President Eisenhower, as it was given in Boston on September 21, 1953.