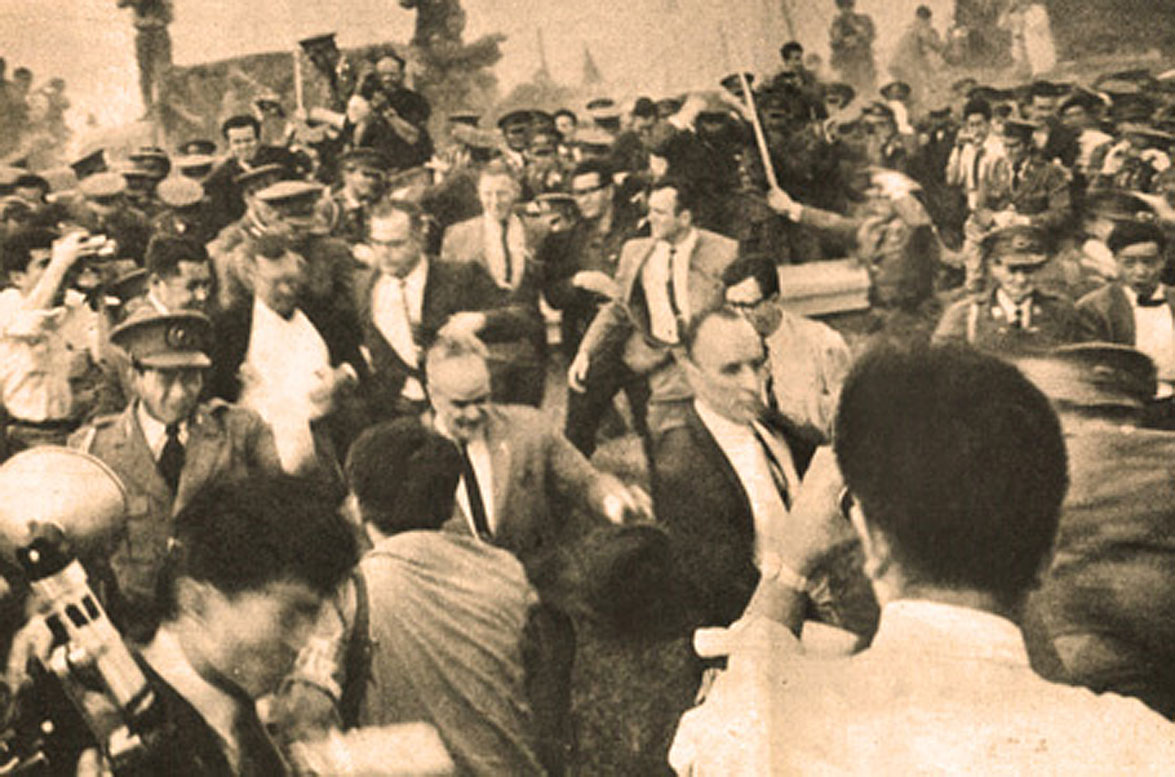 Anti-American protests-turned-riots in Tokyo - Somehow, we were no longer the good guys.

Anti-American protests-turned-riots in Tokyo – Somehow, we were no longer the good guys.

1960 was considered by many at the time to be a strange year. We were going through our ritual of selecting candidates for President, while at the same time, absorbed in debates at the UN and the worsening Cold War and our gradually deteriorating prestige abroad. We still had friends, but they were dwindling. And in their place, riots and anti-American protests and characterizations of The Ugly American. How did this happen and when did it start?

Many lay blame on the Cold War and the almost non-stop portrayal of the Russians as evil and bloodthirsty. Still others cited our lack of understanding and unwillingness to try and improve our Foreign Policy, while still others cited the failure of such agencies as the USIA (U.S. Information Agency) to understand other cultures.

The problem many felt, went deeper. The main trouble in American propaganda, as it was seen in 1960, was that it almost inevitably reflected on what Americans had become, as a nation and a people. It was regarded as a symbol in the eyes of the world, that America had ceased to be the Land of Hope and Progress, instead becoming that land of the Status Quo. And that America’s lack of dynamism was reflected in its propaganda. And the lack of commitment and purpose has been reflected in a lack of commitment and purpose of our leaders, our government and the American people in general.

And this was the opposite of what it was like just post-World War 2, where we were actively engaged in UNRA, The Marshall Plan, Point Four and numerous other programs that reflected positively on the American experience. It was only after the Korean War and numerous military involvements, where America became preoccupied with fighting wars and taking a military role in the world, instead of promoting peace and prosperity, that things started going haywire.

And it’s interesting, some 56 years later, we’re still involved in military excursions – we are going through an election cycle now where most people in the world react with shock and dismay – and we’re at odds, even in our own country, as to who we are and where our future lies.

It’s a fascinating panel discussion, as presented via The Open Mind Program from July 24, 1960, and points to the fact that our real failures in Foreign policy have been going on for quite some time. That it seems painfully obvious we’ve become very good at waging war, but hopelessly inept at waging peace.