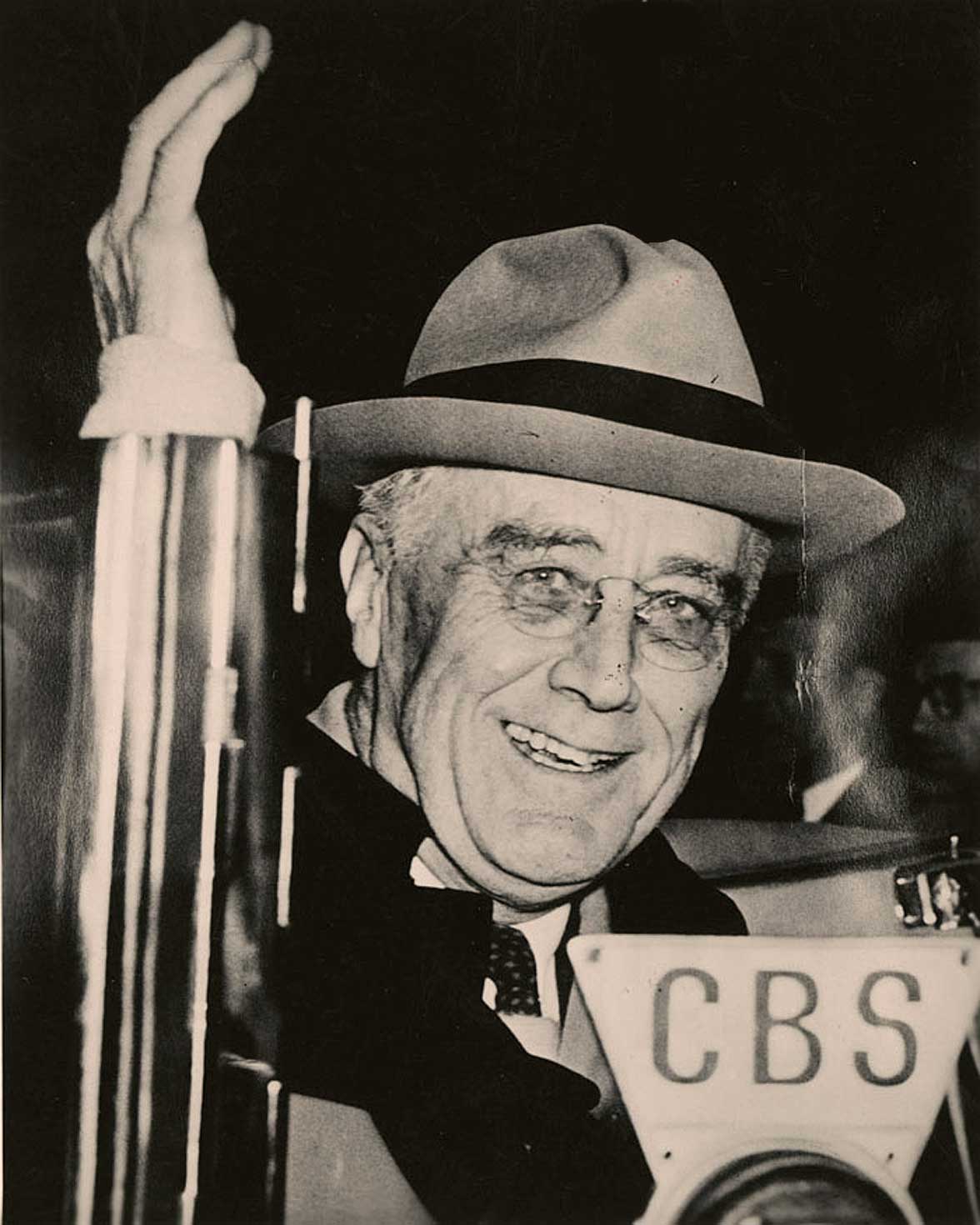 FDR - On the campaign trail for a Fourth term.

FDR – On the campaign trail for a Fourth term.

In many ways a poles-apart contrast to the Presidential campaign of this year, the Presidential Campaign of 72 years ago was an unprecedented Fourth-term run for Franklin D. Roosevelt. Coupled with the U.S. smack in the midst of a World War, a war which was being won by the allies on all fronts, but a war which was still a ways away from ending and with many more costly battles to be waged. There were some who felt that voting FDR out of office now wouldn’t affect the outcome of the war, and that a White House under the control of the Democrats was long overdue for a change. The Republicans were confident that Thomas E. Dewey would ride to victory. But there were many more who felt the war wasn’t over yet, and since FDR had taken us this far, it would be crazy to switch horses in mid-stream (to quote an old cliché). To an overflow crowd at Shibe Park in Philadelphia, President Roosevelt made his case for a fourth term on this day 72 years ago. Here is that complete address:

President Roosevelt: “I think it is a remarkable achievement that within less than five months we have been able to carry out major offensive operations in both Europe and the Philippines—thirteen thousand miles apart from each other.

And speaking of the glorious operations in the Philippines, I wonder—whatever became of the suggestion made a few weeks ago, that I had failed for political reasons to send enough forces or supplies to General MacArthur?

Now of course, I realize that in this political campaign it is considered by some to be very impolite to mention the fact that there is a war on.

But, the war is still on and eleven million American fighting men know it- and so do their families. And in that war I bear a responsibility that I can never shirk and never, for one instant, forget.

And I am not supposed to mention that, either.

But somehow or other, it seems to me that this is a matter of considerable importance to the people of the United States.

You know, it was due to no accident and no oversight that the framers of our Constitution—in this City—put the command of our armed forces under civilian authority.

And as a result it is the duty of the Commander in Chief to appoint the Secretaries of War and Navy and the Chiefs of Staff—and I feel called upon to offer no apologies for my selection of Henry Stimson, the late Frank Knox, and Jim Forrestal, or of Admiral Leahy, General Marshall, Admiral King, and General Arnold.

Furthermore, the Commander in Chief has final responsibility for determining how our resources shall be distributed as between our land forces, our sea forces, and our air forces, and as among the different theaters of operation, and also what portion of’ these great resources of ours .shall be turned over to our allies.

Our teamwork with our allies in this war has involved innumerable intricate problems that could be settled only around the conference table by those who had final authority.

The other day, I am told, a prominent Republican orator stated that: “There are not five civilians in the entire national Government who have the confidence and respect of the American people.”

In fact, he went on to describe your present Administration as “the most spectacular collection of incompetent people who ever held public office.”

Well, you know, that is pretty serious, because the only conclusion to be drawn from that is that we are losing this war. If so, that will be news to most of us—and it will certainly be news to the Nazis and the Japs.

Now, I like a thing called the record, and the record will show that from almost the first minute of this Administration—twelve years ago, nearly—I started to rebuild the United States Navy which had been whittled down during previous Administrations. What the Navy suffered from conspicuously during three Republican administrations was a drastic false economy, which not only scrapped ships but even prevented adequate target practice, adequate maneuvers, enough oil, or adequate supplies. Indeed, it reached the point that on some vessels the crews—who at least were patriotic—chipped in out of their own pockets to buy their own brass polish to keep the bright work shining.

The record will show that when we were attacked in December, 1941, we had already made tremendous progress toward building the greatest war machine the world has ever known.