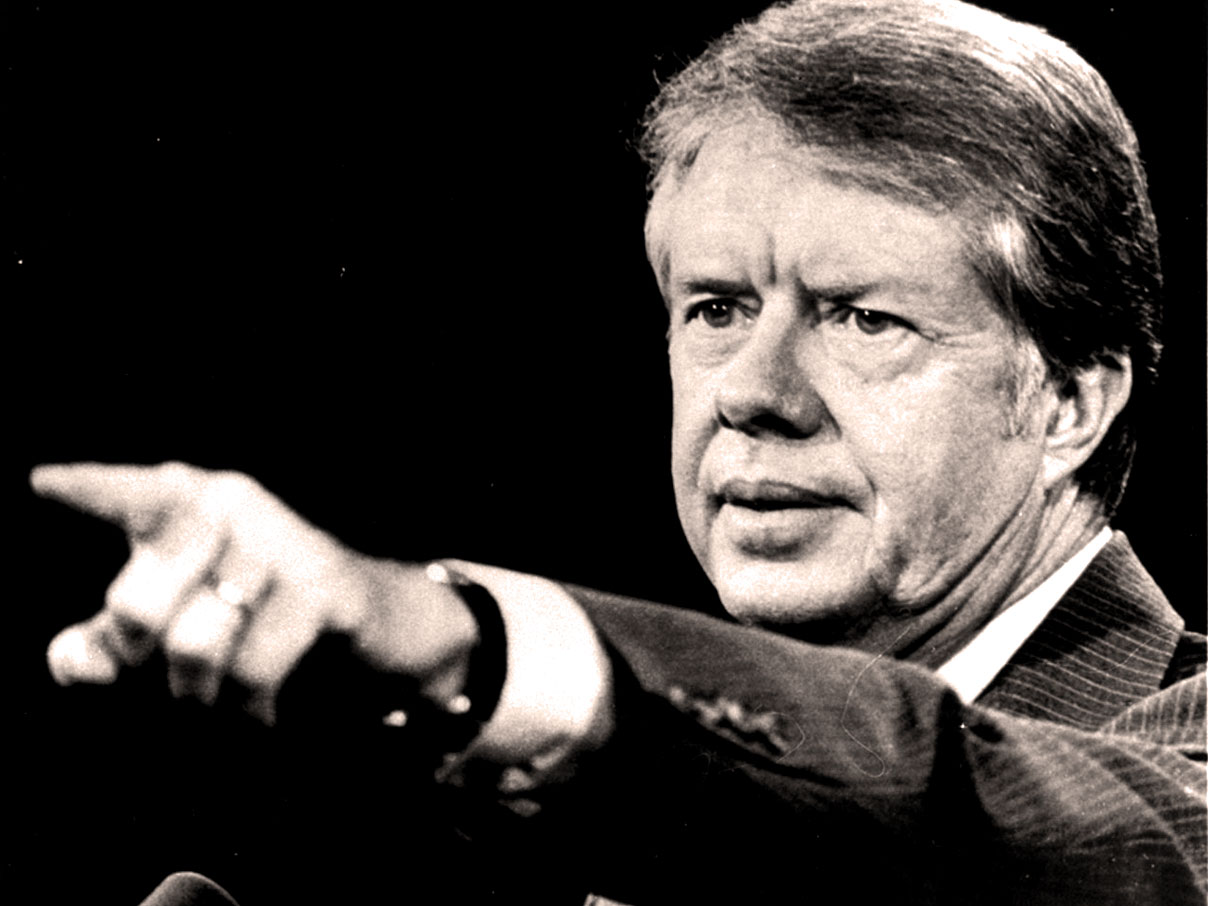 Jimmy Carter - testing out the waters on a new Energy policy.

Jimmy Carter – testing out the waters on a new Energy policy.

President Jimmy Carter, at one of his regular Press Conferences in 1977. Testing the waters on an Energy policy that had Americans relying on less Foreign oil, Carter was preparing proposals to take to Congress. Also up for discussion was the situation in South Africa and the threatened imposition of sanctions stemming from the crisis in Namibia and Zimbabwe and South Africa’s recent clamping down on press freedoms as well as outlawing many of the organizations who were working at achieving some peace in the region.

Here is the opening statement:

President Jimmy Carter: “Good afternoon. I have a brief statement to make before I take questions.

Action on a national energy policy is a test of the ability of our democratic system to respond to a recognized threat before it seriously damages our Nation and our economy, and we will all be measured by the courage which we are able to muster to face up to this energy problem.

The debate that’s now going on concerning the National Energy Plan is not a contest between the executive branch and the Congress nor between the House of Representatives and the Senate. It’s a test of our national will.

We must protect the American people and also avoid unfair windfall profits. We must also meet our stated objectives on conservation, on production, and on the shift of consumption to other sources of energy other than gas and oil. And we must not let the formation of a national energy policy break our budget.

Nothing less is at stake than the ability of our own Nation to act independently as a country. We cannot allow uncertain foreign oil supplies to obtain a stranglehold over the United States. We cannot continue to import ,$45 billion worth of oil annually, almost half the total amount that we consume and about how much we waste that we don’t need to waste.

And we cannot let this excessive dependence on foreign oil continue to increase our trade deficit, to drain off purchasing power of our economy, and also to affect our economic stability.

Both the Congress and I know that enactment of comprehensive energy legislation must be our top priority.

Now, as you know, I had planned to send by now to the Congress a major tax reform package. Although most of the work has already been done, I’ve decided to submit that program after Congress completes its work on both social security and also energy legislation.

The Congress right now needs an opportunity to concentrate its attention more fully on the entire energy package, including the tax proposals.

I will have more time working with my staff and with the Congress and with labor and business leaders to evolve the difficult answers to complicated tax proposals. We have an early need to simplify the tax system, to provide more equity to modify the tax rates and to improve capital formation.

The tax reform proposals will be a major element in a comprehensive economic program designed to promote a strong economy and to deal further with reducing inflation, which has recently been on the way down, to reduce unemployment, which is also going down quite slowly, and to do this both immediately and in the years ahead.

The principal component parts of this program have to be carefully integrated also in our budgetary proposals for fiscal year 1979. I prefer to make these final decisions on the tax reform program after the Congress has completed action on the energy program, particularly its tax components, and social security, which has heavy tax connotations.

Both of these proposals can be assessed, obviously, after the Congress adjourns. By the end of the year we will have more information also on the state of the economy, to know how much of our tax reform proposal should be devoted to stimulating the economy.

We have a full agenda this year, and I have discussed this delay in the tax reform proposal until after the Congress adjourns with the leaders of Congress. And I might say they unanimously agree with this delay.”

The floor is then open to questions from the press and the conference lasts some 30 minutes. Here is that complete press conference from President Jimmy Carter, as broadcast live by National Public Radio on October 27, 1977