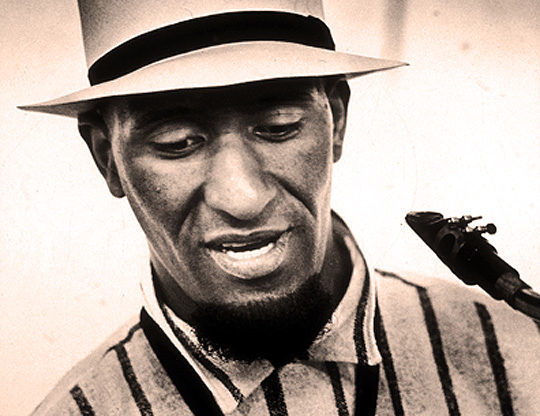 Sonny Rollins for a Sunday afternoon (or evening, depending on where you are). From a concert given in Stockholm on Ocotber 27, 1974 and recorded for posterity by Swedish radio outlet Sveriges Radio.

Sonny Rollins has long been considered one of the cornerstones in the development of Modern Jazz – and with the passage of time, has become one of its last representatives. Rollins has had an unquestionably brilliant career going back to the late 1940s. He has collaborated with just about every milestone Jazz artist of the 20th century and to this day, as elder statesman, he is still one of its most vocal proponents.

Some of the reasons for his long and enduring career is his singleness of purpose, his point of view and his continuing to grow – I think these are essential ingredients in any artist – with Sonny Rollins, they are givens. What has always been the magic element in his career is his unwillingness to settle – that sometimes compelling desire to rest on laurels – to no longer find it necessary to continue seeking and discovering but to stay frozen in a place and time.

At the risk of dragging out an often mis-used/over-used and randomly applied phrase to the artistry of Sonny Rollins; visionary is probably the most apt – and he really fits that description. And at 88, resting on laurels is not in the cards.

But to remind you of an earlier incarnation; one some 40 years ago – here is a gig he performed in Stockholm on October 27, 1974 with a group consisting of Rufus Harley on soprano sax and bagpipes – Yoskhiaki Masuo, guitar and Gene Perla bass.

A little background on this period via his webpage:

“I was getting into eastern religions,” he remembers. “I’ve always been my own man. I’ve always done, tried to do, what I wanted to do for myself. So these are things I wanted to do. I wanted to go on the Bridge. I wanted to get into religion. But also, the Jazz music business is always bad. It’s never good. So that led me to stop playing in public for a while, again. During the second sabbatical, I worked in Japan a little bit, and went to India after that and spent a lot of time in a monastery. I resurfaced in the early 70s, and made my first record in `72. I took some time off to get myself together and I think it’s a good thing for anybody to do.”

In 1972, with the encouragement and support of his wife Lucille, who had become his business manager, Rollins returned to performing and recording, signing with Milestone and releasing Next Album. (Working at first with Orrin Keepnews, Sonny was by the early ’80s producing his own Milestone sessions with Lucille.) His lengthy association with the Berkeley-based label produced two dozen albums in various settings – from his working groups to all-star ensembles (Tommy Flanagan, Jack DeJohnette, Stanley Clarke, Tony Williams); from a solo recital to tour recordings with the Milestone Jazzstars (Ron Carter, McCoy Tyner); in the studio and on the concert stage (Montreux, San Francisco, New York, Boston). Sonny was also the subject of a mid-’80s documentary by Robert Mugge entitled Saxophone Colossus; part of its soundtrack is available as G-Man.

Head over to his bio and check out more if you’re interested.

In the meantime, stick around and dive in.