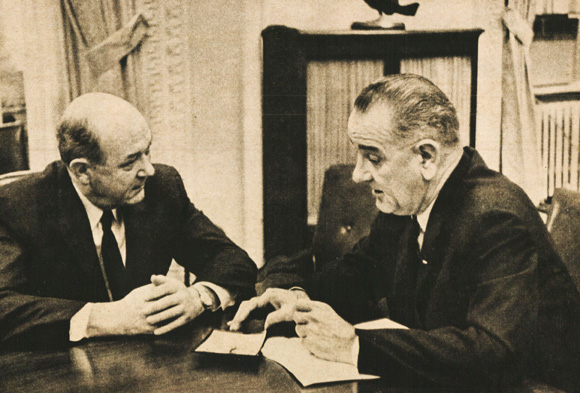 Dean Rusk with LBJ - Of the many thorns, Cuba was the thorniest.

February 7, 1964 – The State Department Holds A Press Conference: The Subject Is Gitmo

Dean Rusk with LBJ – Of the many thorns, Cuba was the thorniest for the State Department.

On a day where crises were popping up seemingly everywhere, the focus on this February 7th in 1964 was the flare-up of bad relations with Cuba and threats by the Castro regime against our military base at Guantanamo.

The flap began over the seizing of four Cuban fishing trawlers off the coast of Florida by the  Coast Guard. In what normally would have been a trivial situation (boats straying into territorial waters), quickly escalated into an International incident. Protests were lodged at the UN, claiming the U.S. was displaying Cold War aggression. The U.S. claimed two of the fishing boats crew requested asylum, with one saying the boats were intentionally sent into territorial waters by Cuba, while the Captains of the boats claimed high winds drove them towards shore.

As an act of retaliation, Castro shut off the water it had been supplying to the U.S.base at Guantanamo. The U.S. retaliated by ordering all the 3,000 Cuban workers it had employed at Guantanamo dismissed, and Castro demanded the U.S. abandon the base at Guantanamo.

This, hot on the heels of flare ups in Vietnam, a situation spiraling out of control in Cyprus, the on-going Berlin situation and a host of other hot-spots for this day in February, the imbroglio with Cuba seemed rather puny by comparison and the State Department had it’s hands full.

But the specter of The Cuban Missile Crisis reared its nostalgic head and that rattled everybody’s cage.

And so went this February 7th in 1964, as delivered by Secretary of State Dean Rusk and highlights of his Press Conference from The State Department broadcast by ABC Radio.