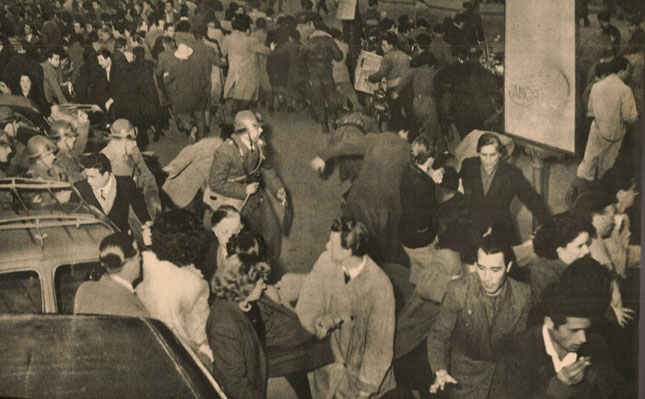 A Cold War Roman Spring – 1948. Weather is here – wish you were beautiful.

If we’re helping keep your mind off things, maybe chipping in a buck of five would be a good idea, no?: Become a Patron!

Characterized as a tinderbox by the State Department, Turkey, Italy, Greece and the Balkan region were hot in the grips of rioting on this March 19th in 1948. Telling too, were reports of Turkish diplomats leaving Hungary and Hungarian diplomats leaving Ankara as a sign of worsening relations between the U.S. backed Turkey and the Soviet-backed Hungary. Greece claimed the Russian army was poised at the Greek border with reports that Communist guerillas were planning attacks on Salonika within the next few days. And reports of heavy Russian military traffic on the move in Albania and Rumania. The Cold War, it seemed, was ramping up.

In Rome, riots broke out ahead of the general elections slated for April 18th. European Union leaders were concerned the amount of disruption going on would make it impossible to build an alliance strong enough and soon enough to ward off the Communist influence so prevalent in Eastern Europe. In a speech in Berkeley California, Secretary of State George C. Marshall warned that Communist encroachments in Europe could no longer go unchecked. He compared these encroachments to the same planned by the Nazi regime years earlier. He pinned the responsibility of the European recovery on the U.S., saying we had to take a postion of leadership in order to prevent the communist influence from taking hold and we couldn’t allow these influences to take hold because of our inaction.

As a result, Congress voted to approve a $5 billion Foreign Aid package. with nearly $300 million in military aid for Greece and Turkey and $500 million in economic aid to China.

Also on the Cold War front, and heading for debate was the question of reinstating the Military Draft with various bills under consideration including one that advocated drafting military aged men, but not veterans. It was all promising to become a hot-button topic in the coming weeks.

At the UN, the U.S. dropped the Palestine Partition Plan, killing it dead in the water, saying instead that UN trusteeship control be imposed over the Palestine region and that another special Assembly meeting be convened to decide Palestine’s future. The irony was the U.S. was one of the prime architects in the Partition Plan the previous year. The fear was, with no resolution, the region would be reduced to turmoil with endless fighting between Arabs and Jews.

In other news – weather for this March 19th wasn’t good. With tornadoes cutting a swatch across 9 states, leaving some 39 dead and millions in destruction. Adding to that, heavy rains and flooding bringing the damage totals up. The worst however, was said to be over.

On top of all that – the Coal strike continued – meat prices continued to climb and the grain market was tossed into uncertainty.