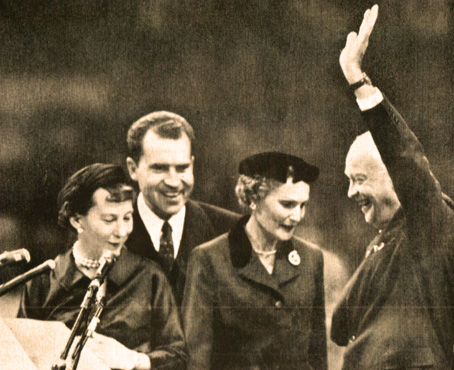 The 1956 Republican National Convention was held by the Republican Party of the United States at the Cow Palace in San Francisco, California, from August 20 to August 23, 1956. U.S. Senator William F. Knowland was temporary chairman and former speaker of the House Joseph W. Martin Jr. served as permanent chairman. It renominated President Dwight D. Eisenhower and Vice President Richard M. Nixon as the party’s candidates for the 1956 presidential election.

Eisenhower was expected to be renominated by acclamation at the Convention until a lone delegate decided to vote for a fictitious candidate named “Joe Smith”. He voted the same when Nixon was nominated.

A reminder of just how much has changed in the race for the Presidency.

For example – this short address by Utah Senator Wallace Bennett:

Here is a one hour extract from the days activities for August 20, 1956 as reported by CBS Radio and their continuing gavel-to-gavel coverage of the 1956 Democratic and Republican Conventions.