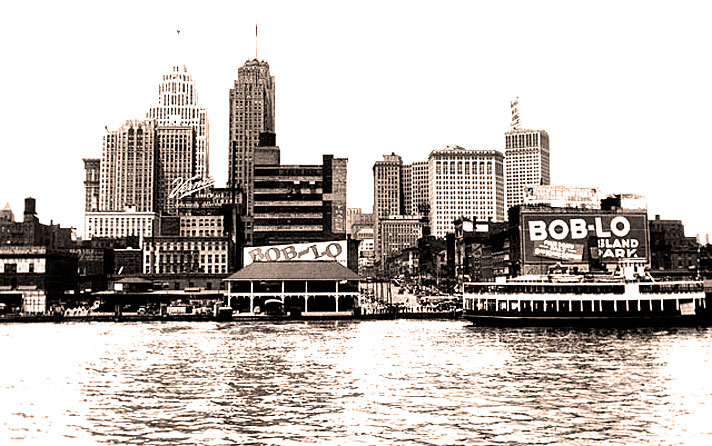 Brochures proclaimed The City Beautiful - reality proclaimed something else.

Brochures proclaimed Detroit: The City Beautiful – reality proclaimed something else.

As a kid growing up in Detroit in the 1950s, I wasn’t really aware of how much Detroit was different than other cities. It was a place I lived with my family and I had no other frame of reference. I was however, aware that my father, who worked in the Auto Industry (as just about everybody else did) would go for periods where he wasn’t working and things seemed strange around the house. Later on, we moved to California and settled in Los Angeles and it was then I began to realize what had happened.

Detroit was, at one time, a great city. It was an industrial center. It was built by the Auto Industry. But by the late 1950s it was already a city in decline. The Great Trek West, as so many did during those years, became a mass migration to the West Coast. Promises of sunshine, open space and the Pacific were reasons enough for most people to abandon these industrial bastions and head for a life free of frigid winters and stifling summers. But more than that – these were cities that were frozen in their past. The inhabitants abandoned them, but so did the corporations that built them.  They downsized, outsourced and disintegrated. And what was left were vast stretches of decay. A place no one wanted to be in. A place you were trapped in if you had no other choice.

And Detroit, now bankrupt, is looking for ways of reinvention. And perhaps, like other cities befalling a similar fate, will succeed in that reinvention.

But in 1949, when this segment of the radio series Report On America first aired, it was still a thriving city with a troubling underbelly. Even in 1949 there was vast wealth, but even more poverty, sometimes within blocks of each other. A city built by cars, yet had virtually no rapid transit. A city with a grand center, but a city spreading rapidly away from that center.

In retrospect, all those elements were tells; harbingers of things to come. But we couldn’t know that in 1949, or even 1959. American still made the greatest cars and hardly anyone heard of Volkswagen, let alone Toyota. But that speaks volumes about complacency, and maybe more volumes about lack of vision and need for innovation.

Here is that episode of Report On America: Detroit, The City Beautiful, from October 8, 1949.