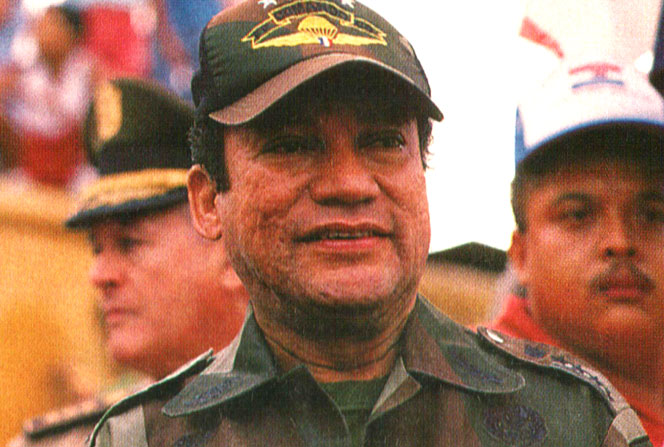 October 9, 1989 – Manuel Noriega And The Little Coup That Couldn’t

Manuel Noriega: Why is this man smiling?

News for this October 9th in 1989 had to do with the growing protest movement in East Germany and the rioting going on in East Berlin. The riots erupted when East German police broke up a demonstration urging reforms from the hardline regime of Erich Honecker. Western Press were barred from the goings on, but word leaking from eyewitnesses said the Police reaction was swift and deadly. Demonstrations had been going throughout East German all week, as a reaction to the 40th anniversary celebration of the East German government. A mass exodus of some 50,000 East Germans to the West was an embarrassment to the Honecker regime and this latest round of repression of demonstrations was a brutal reaction to what many observed as a loss of any international as well as domestic credibility the East German government had.

Meanwhile, Hungary officially became independent of Moscow and quickly established themselves as committed to multi-party elections and a market-based economy. Reformers were still urging more changes, since the “shiny-new non-Communist government” was still run by the same faces as before. Old Leopards – new spots.

Elsewhere in the East. Violence had broken out in Armenia and bloody fighting was taking place in Azerbaijan, the result of a ban on transport strikes and railroad workers defying that ban. Azerbaijan guerrillas took to the streets and the Soviet army was called out to counter the protests and attacks.

On this side of the hemisphere. Panamanian strongman Col Manuel Noriega was consolidating his power since thwarting an attempted coup that had taken place in Panama City just six days earlier. U.S. troops were on alert and poised to join in, but were told not to . . .for now, anyway. And Manuel Noriega was unscathed for the time being.

All that and it was looking like a Commuter World Series with the Oakland A’s winning the American League pennant. It would mean the first time a World series would be played between two Bay Area teams – The Oakland Athletics and The San Francisco Giants.

This day in a nutshell for October 9th 1989, as reported by The CBS World News Roundup.