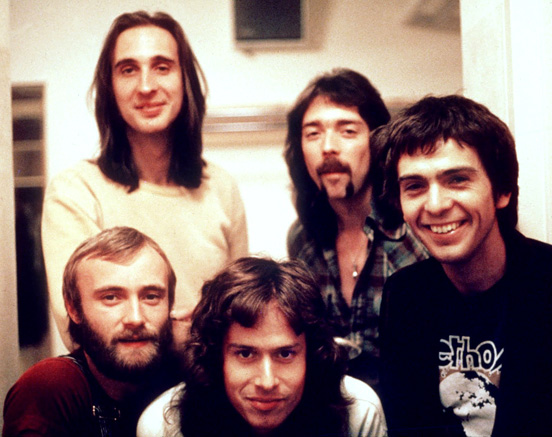 Genesis circa 1972 - To many, the halcyon days of the band. (photo: Armando Gallo)

Genesis circa 1972 – To many, the halcyon days of the band.(photo: Armando Gallo)

A classic concert this weekend. Genesis, during what many consider to be the halcyon days of the band, when the inimitable Peter Gabriel was lead singer. Recorded on November 3, 1972 at, presumably the BBC’s Paris Theater in London.

Following rehearsals in a dance school in Shepherd’s Bush, Genesis recorded Foxtrot at Island Studios between August and September 1972. During the initial sessions, disagreements among Charisma and Anthony contributed to the end of his association with Genesis. After two replacement engineers were tried out, the band settled with John Burns and a new producer, Dave Hitchcock. The album features the 23-minute track “Supper’s Ready”, a suite of various musical segments. The track included an opening acoustic piece, a Gabriel-penned song called “Willow Farm” and a piece derived from a jam by Banks, Rutherford and Collins called “Apocalypse in 9/8”. Other songs were the science-fiction themed “Watcher of the Skies” and the property development-themed “Get ‘Em Out by Friday”. Foxtrot was released in October 1972 and reached No. 12 in the UK. It fared even better in Italy, where it went to No. 1. Foxtrot was well received from critics. Chris Welch of Melody Maker thought Foxtrot was “a milestone in the group’s career”, “an important point of development in British group music”, and that Genesis had reached “a creative peak”. Stephen Thomas Erlewine thought Foxtrot marked the first time “Genesis attacked like a rock band, playing with a visceral power”.

The Foxtrot tour covered Europe and North America from September 1972 to August 1973. The show at the National Stadium in Dublin on 28 September 1972 marked the debut of Gabriel wearing a costume on stage, something that surprised the other band members as they were kept uninformed. Originally suggested by Charisma booking agent Paul Conroy, Gabriel went off stage during an instrumental section in “The Musical Box” and reappeared in his wife’s red dress and a fox’s head. The incident resulted in front cover reports in the music press, allowing the band to double their performance fee. In December 1972, Stratton-Smith organized the band’s first gigs in the US with a show at Brandeis University in Waltham, Massachusetts and Philharmonic Hall in New York City with openers String Driven Thing, in aid of the United Cerebral Palsy Fund. They were well received despite the band complaining of technical issues. Gabriel’s costumes expanded in the following months to include fluorescent face paint and a cape fitted with bat wings for “Watcher of the Skies”, several guises throughout “Supper’s Ready”, and a mask of an old man for “The Musical Box”. An album of recordings from the following UK leg, initially recorded for the American radio program King Biscuit Flower Hour, was released as Genesis Live in July 1973. It reached No. 9 in the UK and No. 105 in the US.

Sadly, because it’s a radio concert, you don’t get to experience the theatrics Gabriel employed in the course of the show. But this was also at a time when the music of Genesis was at its best.

You still get an idea of what all the fuss was about for this band in 1972.