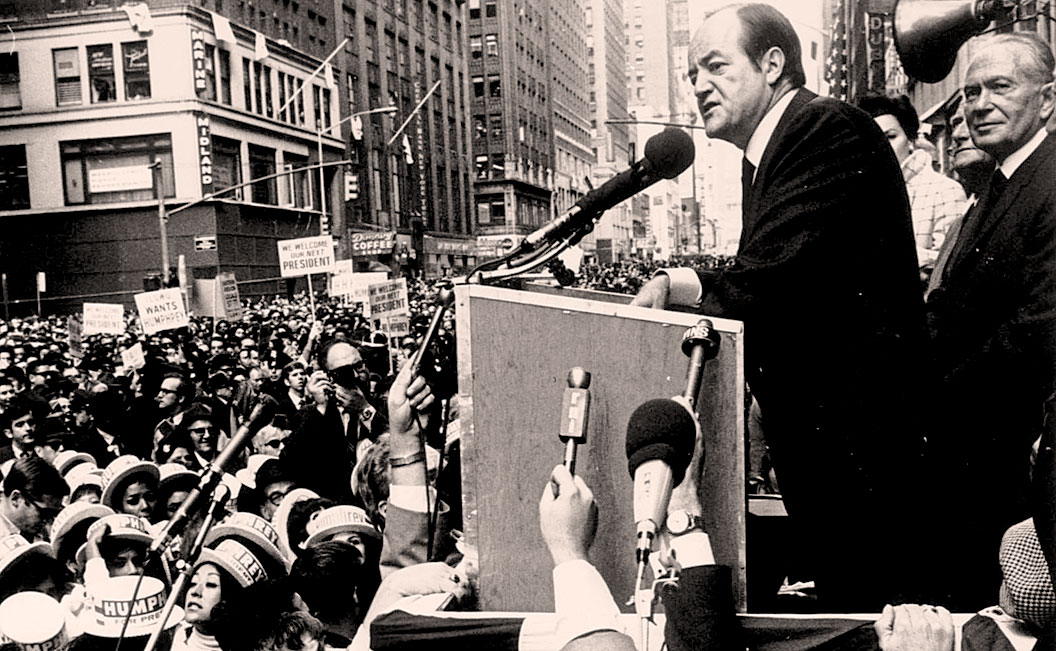 Humphrey-Muskie:The mad dash for votes in 1968.

As the 1968 Presidential campaign sprinted to the finish line, all the heavy-hitters came out, all the endorsements were used and all the promises went into high gear.

The Hubert Humphrey presidential campaign of 1968 began when Vice President of the United States Hubert Humphrey of Minnesota decided to seek the Democratic Party nomination for President of the United States following President Lyndon B. Johnson’s announcement ending his own bid for the nomination. Johnson withdrew after an unexpectedly strong challenge from anti-Vietnam War presidential candidate, Senator Eugene McCarthy of Minnesota, in the early Democratic primaries. McCarthy, along with Senator Robert F. Kennedy of New York, became Humphrey’s main opponents for the nomination. Their “new politics” contrasted with Humphrey’s “old politics” as the increasingly unpopular Vietnam War intensified.

Humphrey entered the race too late to participate in the Democratic primaries. He relied on “favorite son” candidates to win delegates and lobbied for endorsements from powerful bosses to obtain slates of delegates. The other candidates, who strove to win the nomination through popular support, criticized Humphrey’s traditional approach. The June 1968 assassination of Robert Kennedy left McCarthy as Humphrey’s only major opponent. That changed at the 1968 Democratic National Convention when Senator George McGovern of South Dakota entered the race as the successor of Kennedy. Humphrey won the party’s nomination at the Convention on the first ballot, amid riots in Chicago. He selected little-known Senator Edmund Muskie of Maine as his running mate.

Kicking off the last full month of campaigning in 1968, the Humphrey-Muskie camp got support by way of a series of paid political programs from the International Ladies Garment Workers Union featuring a vast array of supporters.

This first program in the series featured President Johnson, whose abrupt dropping out of the 1968 race prompted a scramble, chaos and an assassins bullet into the mix during what has been described as a pivotal point in time for the political life of America.

Here is that first program for the Humphrey-Muskie Campaign, as it originally aired on October 10, 1968.