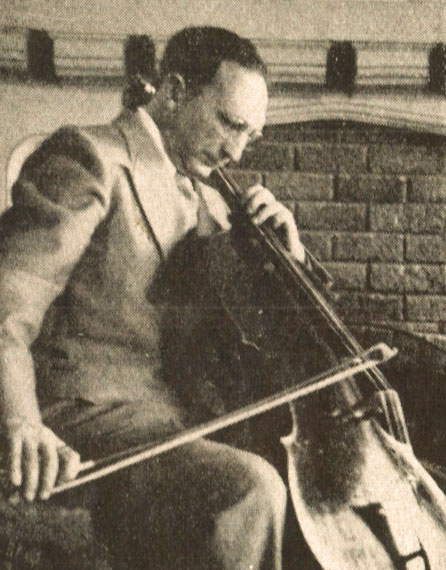 Boris Blinder, along with his Brother Naum, were responsible for a lot of first performances of new music in the 1930's and 1940's.

Boris Blinder, along with his Brother Naum, were responsible for a lot of first performances of new music in the 1930’s and 1940’s.

It could make a huge difference: Become a Patron!

More Contemporary music of the 20th Century this week. Michel Michelet, a native of Kiev, who first migrated to Germany and then, with German persecution of Jews, fled Germany and wound up in the U.S., most notably in Hollywood where he established a substantial career for himself as film composer, writing the scores for some 100+ Hollywood and Overseas movies.

But outside of film, Michelet is virtually unknown. And this weekend’s Gramophone post features one of Michelet’s Chamber works for Cello and Piano. Ten Preludes for Cello and Piano was first premiered in San Francisco in 1942, with San Francisco Symphony Principal Cellist Boris Blinder as soloist. Blinder is joined on this recording by Pianist Isabelle Hesselberg. It was issued around 1945 by the independent Southern California label ALCO Records – a label devoted to first performances and out-of-the-way repertoire and featuring some of the most notable artists of the time. The brother of violinist Naoum Blinder studied cello with Jacques van Lier in Berlin around 1913 and continued his training with Joseph Salmon . In 1929 he played the cello in Paris at the L’Orchestre symphonique de Paris under the direction of Pierre Monteux . In 1937 he went to San Francisco and became the solo cellist of the San Francisco Bay Works Progress Administration Orchestra . In the 1938–39 season, Pierre Monteux brought him to the San Francisco Symphony Orchestra as a solo cellist. He held the position he only shared with Willem Dehé and Herman Reinberg in the 1939–40 season until 1963. With his brother, Frank Hauserand Ferenc Molnar formed the San Francisco String Quartet in the 1940s . In the 1960s he was also active in the Aeolian Ensemble .

I don’t believe this recording has ever been reissued in any form, other than the original 78’s, and I don’t believe it’s been recorded by anyone else since.

So on top of a discovery, it’s also a complete rarity.