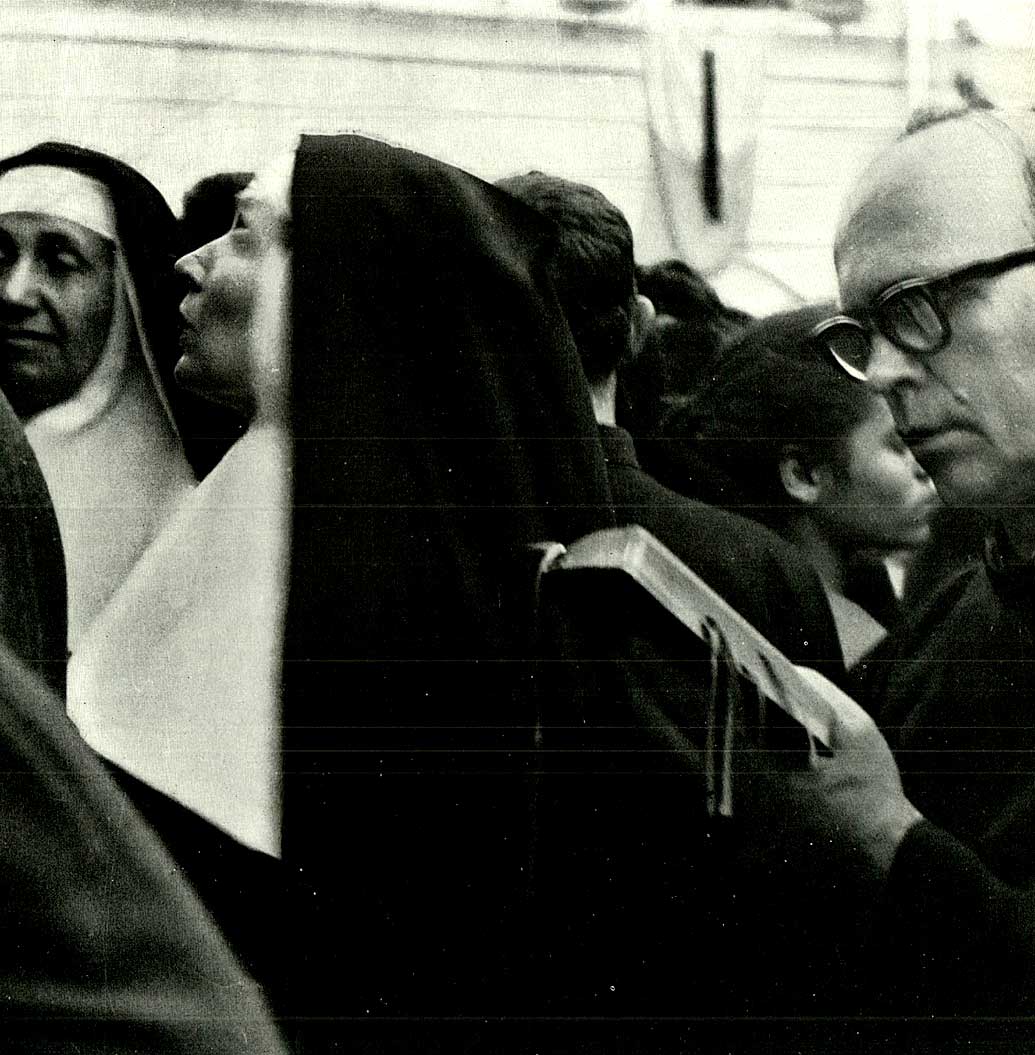 Anticipating a new Pope. An overflowing Vatican and a Television first.

An overflowing Vatican and a Television first.

News for this October 13th in 1958 had much to do with the goings-on at The Vatican. The death of Pope Pius XII and the mourning, as well as the first televised coverage of the burial, was big news.

On 5 October 1958, at his summer residence Castel Gandolfo, the Pope suffered painful complications, but tried to continue his duties between intervals of rest. Next morning, the doctors came to pump his stomach, apparently with success, but he lost consciousness and was given the last rites. Presently he awoke, and the nuns opened the door to the Papal Chapel so he could see and hear them praying the rosary. The next day, the Pope appeared to improve and received visitors. When they opened the window in the evening, he looked out at the stars and said quietly “Look, how beautiful, how great is our Lord”. On the last full day of his life, his temperature rose steadily and his breathing became difficult. At 3.52 a.m. on 9 October, he gave a smile, lowered his head and died. The cause of death was recorded as acute heart failure. Monsignor Domenico Tardini prayed the Magnificat Anima mea dominum, the Virgin Mary’s praise of the Lord, in Latin. His doctor Gaspanini said afterwards: “The Holy Father did not die because of any specific illness. He was completely exhausted. He was overworked beyond limit. His heart was healthy, his lungs were good. He could have lived another 20 years, the Pope had spared himself.”

Less big news, but no less important was coming from China, in the form of the saber-rattling between Mainland China and Formosa over the island of Quemoy. It was announced the Communist Chinese were extending the ceasefire for an additional 2 weeks, which was met with jubilation by the leaders on Formosa, who claimed it was a confession that the Communists were unable to break the island’s defenses and it was an admission of defeat. Observers thought that was being optimistic, but the Nationalist Chinese had put up a good defense and were, in fact, stronger at the time of the ceasefire.

In Washington, the Red Scare atmosphere was getting a revival, with The Supreme Court returning to session and considering a number of landmark decisions, including School Integration. But one case it was refusing to hear was the appeal of a decision over the China Monthly Review case. A magazine printed in Shanghai by three Americans during the Korean War. They were accused of printing seditious articles about the United States Armed forces, including one article which claimed the U.S. Army was using germ warfare against the Communists in Korea. Attorney for the accused was A.L. Wiren, who had previously defended Linus Pauling, Norman Thomas and Bertrand Russell against charges of Communist influences. Wiren asked for, and reluctantly received, permission from the State Department to travel to China and interview people claiming the charges of germ warfare were true. When Wiren returned, he told the court he had found ample evidence the charges were true and located several witnesses. But in order for the testimony to be recognized, it would be necessary for the U.S. to negotiate a so-called Judicial Agreement with the Chinese Communist Government. The request was denied and the appeal was refused because it would have meant the U.S. recognizing Red China, which it was steadfast about not doing. The decision tossed the case back to a lower court in San Francisco, where it was being heard.

And that’s a small sample of what went on this October 13th in 1958, as reported by Fulton Lewis Jr. and The News.