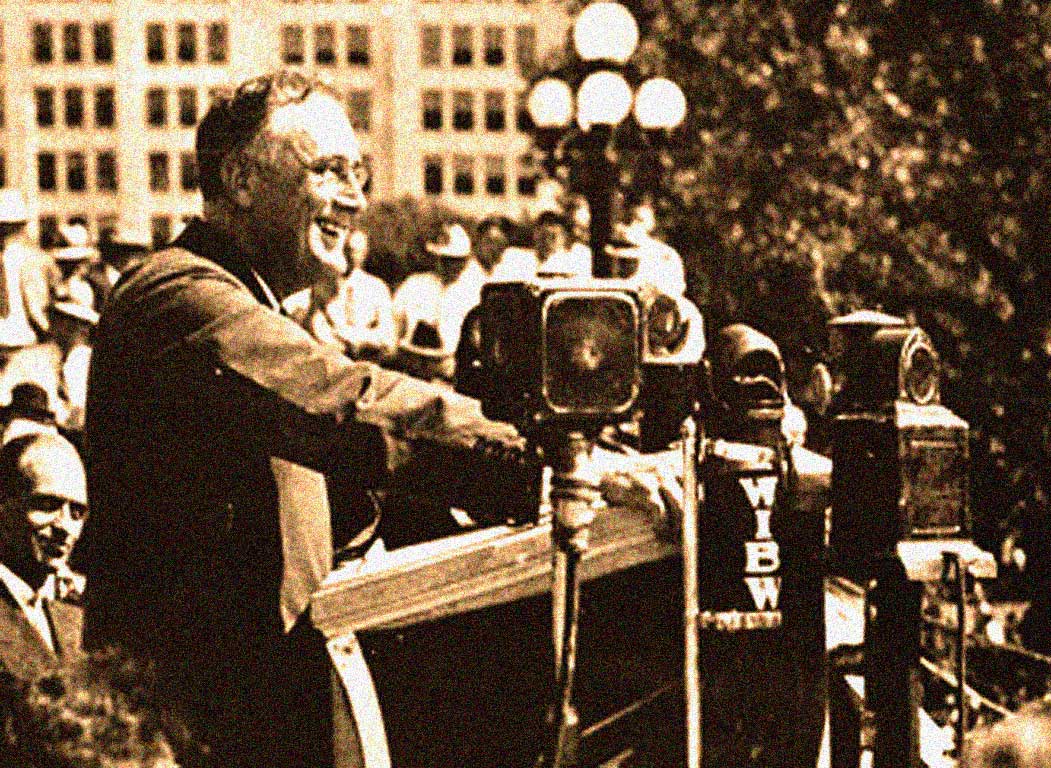 With the Presidential Campaign of 1936 in its last weeks and at fevered pitch, President Roosevelt embarked on a coast-to-coast tour to bring his message home. In 1936, America was in better shape than it was in 1932. But detractors clamored to call the New Deal a disaster, that The New Deal was Socialism, that FDR was becoming a dictator.

His list of accomplishments in a four-year period spoke volumes:

President Roosevelt: “Let me make one simple statement. When I refer to high finance I am not talking about all great bankers, or all great corporation executives, or all multimillionaires—any more than Theodore Roosevelt, in using the term “malefactors of great wealth,” implied that all men of great wealth were “malefactors.” I do not even imply that the majority of them are bad citizens. The opposite is true.

Just in the same way, the overwhelming majority of business men in this country are good citizens and the proportion of those who are not is probably about the same proportion as in the other occupations and professions of life.

When I speak of high finance as a harmful factor in recent years, I am speaking about a minority which includes the type of individual who speculates with other people’s money—and you in Chicago know the kind I refer to—and also the type of individual who says that popular government cannot be trusted and, therefore, that the control of business of all kinds and, indeed, of Government itself should be vested in the hands of one hundred or two hundred all-wise individuals controlling the purse strings of the Nation.

High finance of this type refused to permit Government credit to go directly to the industrialist, to the business man, to the home owner, to the farmer. They wanted it to trickle down from the top, through the intricate arrangements which they controlled and by which they were able to levy tribute on every business in the land.

And in the face of their demands that Government do nothing that they called “unsound,” the Government, hypnotized by its indebtedness to them, stood by and let the depression drive industry and business toward bankruptcy.

America is an economic unit. New means and methods of transportation and communications have made us economically as well as politically a single Nation.

Because kidnappers and bank robbers could in high-powered cars speed across state lines it became necessary, in order to protect our people, to invoke the power of the Federal Government. In the same way speculators and manipulators from across State lines, and regardless of State laws, have lured the unsuspecting and the unwary to financial destruction. In the same way across State lines, there have been built up intricate corporate structures, piling bond upon stock and stock upon bond—huge monopolies which were stifling independent business and private enterprise.

There was no power under Heaven that could protect the people against. that sort of thing except a people’s Government at Washington. All that this Administration has done, all that it proposes to do—and this it does propose to do—is to use every power and authority of the Federal Government to protect the commerce of America from the selfish forces which ruined it.”

Addressing a crowd of over 30,000 filling Chicago Stadium and an additional crowd estimated at over 100,000 outside the stadium and listening on loudspeakers, FDR gave a rundown of the New Deal’s first four years. Here is that address, as it was given on the evening of October 14, 1936.