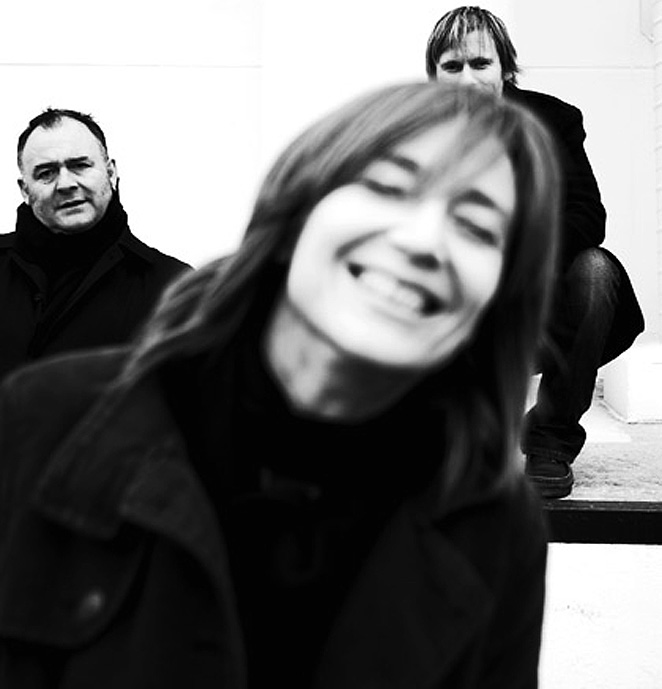 One of my favorite bands of the last 20 years, Portishead in concert are always an eagerly anticipated event. And they certainly didn’t disappoint this year at Glasto. Beth Gibbons‘ mesmerizing vocals, mistakenly considered doom-laden by some, but once you realize that one of her influences was Edith Piaf, take on an aura of passion and mystery that only adds to the complete landscape.

A totally captivating band, much loved by the audience. I am sure the band got a giggle out of the impromptu sing-along during Sour Times – it gives you some idea of the wide-ranging influence they’ve had over the years.

A little history in case you didn’t already know: Geoff Barrow and Beth Gibbons met during a coffee break at an Enterprise Allowance course in February 1991. That year they recorded their first song for the album, “It Could Be Sweet”. They then met Adrian Utley while they were recording at the Coach House Studios in Bristol, and Utley heard the first song Barrow and Gibbons had recorded, and began to exchange ideas on music.[13] The resulting first album by Portishead, Dummy, was released in 1994. The cover features a still from the band’s own short film To Kill a Dead Man. The credits indicate that at this juncture, Portishead was a duo of Geoff Barrow and Beth Gibbons. Adrian Utley, who co-produced the album with them (and who played on nine of the tracks and co-wrote eight), became an official band member shortly after its release.

Despite the band’s aversion to press coverage, the album was successful in both Europe and the United States (where it sold more than 150,000 copies even before the band toured there). Dummy was positively described by the Melody Maker as “musique noire for a movie not yet made”. Rolling Stone praised its music as “Gothic hip-hop”. Dummy spawned three singles: “Numb”, “Sour Times” and “Glory Box”, and won the Mercury Music Prize in 1995. The success of the album saw the band nominated for Best British Newcomer at the 1995 Brit Awards. In 2003, the album was ranked number 419 on Rolling Stone magazine’s list of the 500 Greatest Albums of All Time. The album is often considered one of the greatest trip hop albums to date and is a milestone in the definition of the genre.

Shortly after this Glastonbury appearance, Portishead embarked on a European tour but sadly, not coming to the U.S.

Portishead continue to inspire and be a very vital part of the music scene – we can breathe a big sigh of relief over that one.

Here is their complete performance as relayed by BBC6 Music on June 28th 2013.

I think the only thing I’m more grateful for than having Portishead around to listen to is having the BBC around to make it possible. You will admit they are, in their own huge way, giving music a chance to be heard via avenues not possible before. Even though there are glitches here and there and rights issues to hammer out, the bigger picture benefits audience and artist alike and nobody can forget that.