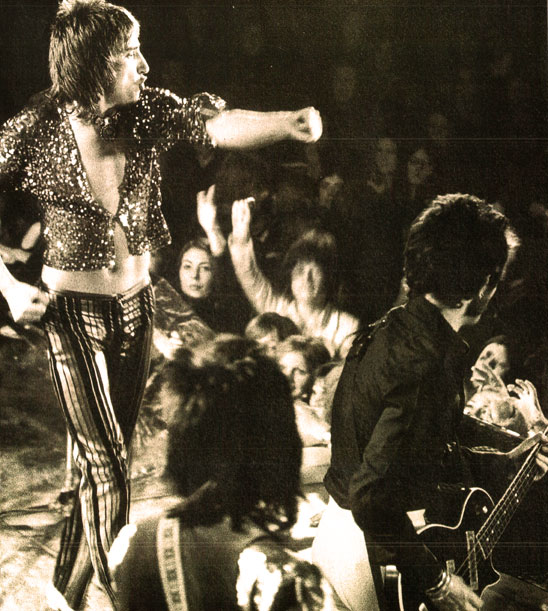 Rod Stewart and Faces - Boozy Rock n' Roll had its time in the sun.

Faces In Concert -1971 – Past Daily Soundbooth

Rod Stewart and Faces – Boozy Rock n’ Roll had its time in the sun.

Another classic concert this week – Faces with Rod Stewart, recorded live by the BBC on May 23rd, 1971.

The first collaboration among the future Faces was in a formation called Quiet Melon, which also featured Wood’s older brother Art Wood and Kim Gardner; they recorded four songs and played a few shows in May 1969, during a break in Ronnie Wood’s and Rod Stewart’s commitments with The Jeff Beck Group. Later that summer Wood and Stewart parted ways with Beck and joined Lane, McLagan and Jones full-time. Prior to any releases by the new Faces lineup, Wood and McLagan appeared on Stewart’s first solo album in 1969, An Old Raincoat Won’t Ever Let You Down (known as The Rod Stewart Album in the US). The rest of the backing band on the album included drummer Micky Waller, keyboardist Keith Emerson and guitarists Martin Pugh (of Steamhammer, and later Armageddon and 7th Order) and Martin Quittenton (also from Steamhammer).

With the addition of Wood and Stewart, the “small” part of the original band name was dropped, partly because the two newcomers (at 5’9″ and 5’10” respectively) were significantly taller than the three former Small Faces. Hoping to capitalize on the Small Faces’ earlier success, record company executives wanted the band to keep their old name; however, the band objected, arguing the personnel changes resulted in a group very different from the Small Faces. As a compromise, in the US their debut album was credited to the Small Faces, while subsequent albums appeared under their new name.

The group regularly toured Britain, Europe and the United States from 1970 to 1975, and were among the top-grossing live acts in that period; in 1974 their touring also encompassed Australia, New Zealand and Japan. They toured the United States and Canada in 1975. Among their most successful songs were “Had Me a Real Good Time”, their breakthrough UK hit “Stay with Me”, “Cindy Incidentally” and “Pool Hall Richard”. As Rod Stewart’s solo career became more successful than that of the group, the band became overshadowed by their lead singer. A disillusioned Ronnie Lane left the band in 1973; one reason given later for his departure was frustration over not having more opportunities to sing lead vocals.

This concert was recorded around the time their milestone album Long Player was released, and much of the material from that album is part of the concert. Rod Stewart is in top form, as is the rest of the band who were just hitting huge on the popularity scales and about to take on the U.S.

And of course, you really have to play this one loud.