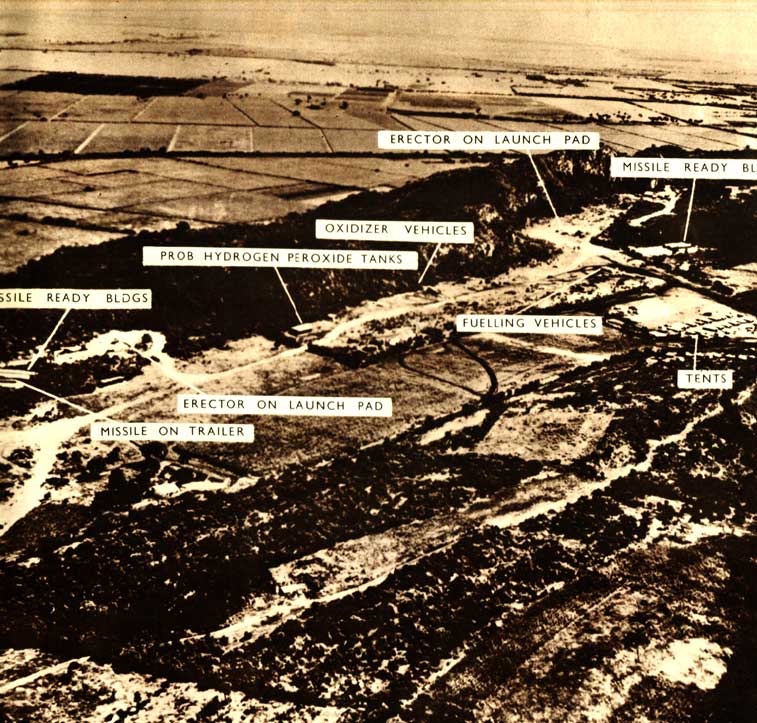 News for this day in 1962 was decidedly ominous, and if you had grown up on a diet of Cold War paranoia, it was the worst case scenario come to life. Ever since the revolution in Cuba in 1959, and the overthrow of the Battista government for the one set up by rebel leader Fidel Castro, the fear in Washington was a Cuban alignment with the Soviet Union and what would become a springboard for Communist influence of Latin America.

And from 1959 until October of 1962, a popularity contest of sorts was underway. With such programs as The Alliance For Progress and the Punta del Este Conference as efforts to shore up flagging influence in that region of the world, the U.S. was doing its level best to win hearts and minds in the region.

And then came news of Russian missiles being set up in Cuba, aimed presumably at key American cities and shipments of Russian arms and military supplies en route to Havana.

It sent an alarming signal, and for the next week it sent the U.S. on a war footing not seen since Korea.

From the outset of the crisis, Kennedy and ExComm determined that the presence of Soviet missiles in Cuba was unacceptable. The challenge facing them was to orchestrate their removal without initiating a wider conflict–and possibly a nuclear war. In deliberations that stretched on for nearly a week, they came up with a variety of options, including a bombing attack on the missile sites and a full-scale invasion of Cuba. But Kennedy ultimately decided on a more measured approach. First, he would employ the U.S. Navy to establish a blockade, or quarantine, of the island to prevent the Soviets from delivering additional missiles and military equipment. Second, he would deliver an ultimatum that the existing missiles be removed.

So on this October 22, 1962, all ears were glued to radios and all eyes were frozen on TV’s, waiting for word as to when the next shoe in this crisis was going to drop.