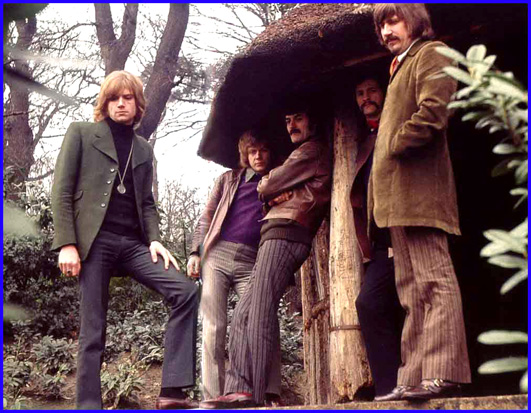 The Moody Blues - the image of the band standing under what appeared to be a giant mushroom did not fall on blind eyes.

The Moody Blues In Concert – 1969 – Past Daily Backstage Pass

The Moody Blues – the image of the band standing under what appeared to be a giant mushroom did not fall on blind eyes.

Most people have relegated The Moody Blues to a sort of caricature status in recent years – the epitome of the airey-faerie Hippy-love and tie-dye stereotype of the 60’s. Their music has been limited to the almost exclusive playing of Knights In White Satin or Tuesday Afternoon, their two biggest hits from the period, on most Oldies stations. And they’ve been pigeon-holed.

But you have to remember that when The Moody Blues made the sweeping change from mid-60’s Beat Group to pioneers of Symphonic Rock in 1967 nobody else was doing it. And when Days Of Future Past was released it was a huge revelation and a massive step in the change of direction for Rock music. Along with The Who’s Tommy, The Beatles Sgt. Pepper, Days Of Future Past signaled a beginning in what would become known as The Concept Album. And it became a form which many bands emulated over the next 20 or so years. But with all the emulation came new insights and new points of view and more elaborate musicianship and The Moody Blues contribution during this time got relegated to curio status and that has been unfortunate.

Bear in mind too, that when The Moody Blues first toured with this new concept, and introduced the Melotron as an integral part of the band, it wasn’t met with a lot of acceptance on the parts of many musicians. I remember when they first played Los Angeles in 1968, The Musicians Union had set up pickets to protest the use of the Melotron, saying it had replaced an entire string section of working musicians and that was deemed unfair by the powers-that-were.

But most of that has been forgotten and, for the most part, marginalized with passing decades.

So as a reminder of just how influential the band was during the first years of their sweeping change, here is a concert they did for The BBC. Recorded on December 17, 1969, featuring the lineup of that time, performing songs that were new then and heard with a different set of ears.

If you aren’t familiar with The Moody Blues, here’s what you missed. If you are, here is reminder of what you may have forgotten about.

Play it loud, because that’s how we heard it at the time.