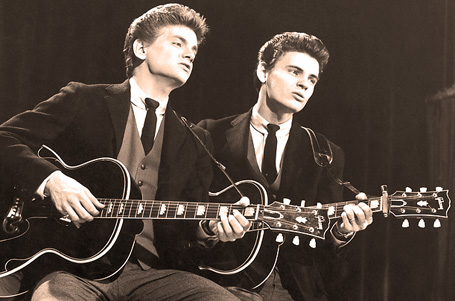 The Everly Brothers - High priests of Pop in 1958

The Everly Brothers On The Air – 1958 – Past Daily Soundbooth

The Everly Brothers – High priests of Pop in 1958

Not askin’ for much:Become a Patron!

A brief detour to live TV of the 1950’s tonight with The Everly Brothers and their guest appearance on The Big Record, the short-lived TV Variety show hosted by Patti Page and featuring the hit makers of the day.

The Everly Brothers were known for steel-string acoustic guitar playing and close harmony singing. Consisting of Isaac Donald “Don” Everly (born February 1, 1937) and Phillip “Phil” Jason Everly (January 19, 1939 – January 3, 2014), the duo was raised in a musical family, first appearing on radio singing along with their father Ike Everly and mother Margaret Everly as “The Everly Family” in the 1940s. When the brothers were still in high school, they gained the attention of prominent Nashville musicians like Chet Atkins, who began to groom them for national attention.

They began writing and recording their own music in 1956, and their first hit song came in 1957, with “Bye Bye Love”, written by Felice and Boudleaux Bryant. The song hit No. 1 in the spring of 1957, and additional hits would follow through 1958, many of them written by the Bryants, including “Wake Up Little Susie”, “All I Have to Do Is Dream”, and “Problems”. In 1960, they signed with the major label Warner Bros. Records and recorded “Cathy’s Clown”, written by the brothers themselves, which was their biggest selling single. The brothers enlisted in the United States Marine Corps Reserve in 1961, and their output dropped off, though additional hit singles continued through 1962, with “That’s Old Fashioned (That’s the Way Love Should Be)” being their last top-10 hit.

This appearance, broadcast on February 5, 1958 features the Everly Brothers playing abbreviated versions of Wake Up Little Susie and Should We Tell Him, backed by an orchestra that was having a hard time keeping up.

The music of the Everly Brothers influenced the Beatles, who referred to themselves as “the British Everly Brothers” when Paul McCartney and John Lennon went hitchhiking south to win a talent competition. They based the vocal arrangement of “Please Please Me” on “Cathy’s Clown”.

Paul Simon, who worked with the pair on “Graceland”, said on the day after Phil’s death, “Phil and Don were the most beautiful sounding duo I ever heard. Both voices pristine and soulful. The Everlys were there at the crossroads of country and R&B. They witnessed and were part of the birth of rock and roll.”