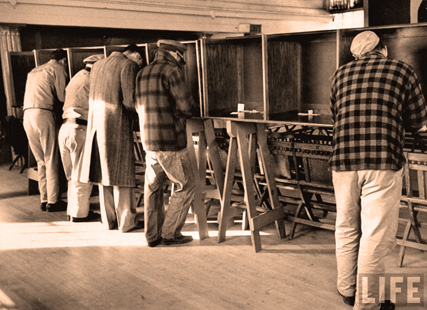 Harry Truman had ascended to the presidency in April 1945 after the death of Franklin D. Roosevelt. Defeating attempts to drop him from the ticket, Truman won the presidential nomination at the 1948 Democratic National Convention. The Democratic convention’s civil rights plank caused a walk-out by several Southern delegates, who launched a third-party “Dixiecrat” ticket led by Governor Strom Thurmond of South Carolina. The Dixiecrats hoped to win enough electoral votes to force a contingent election in the House of Representatives, where they could extract concessions from either Dewey or Truman in exchange for their support. Truman also faced a challenge from the left in the form of former Vice President Henry A. Wallace, who launched the Progressive Party and challenged Truman’s confrontational Cold War policies. Dewey, who was the leader of his party’s moderate eastern wing and had been the 1944 Republican presidential nominee, defeated Senator Robert A. Taft and other challengers at the 1948 Republican National Convention.

Truman’s feisty campaign style energized his base of traditional Democrats, consisting of most of the white South, as well as Catholic and Jewish voters; he also fared surprisingly well with Midwestern farmers. Dewey ran a low-risk campaign and largely avoided directly criticizing Truman. With the three-way split in the Democratic Party, and with Truman’s low approval ratings, Truman was widely considered to be the underdog in the race, and virtually every prediction (with or without public opinion polls) indicated that Truman would be defeated by Dewey.

Defying these predictions, Truman won the election with 303 electoral votes to Dewey’s 189. Truman also won 49.6% of the popular vote compared to Dewey’s 45.1%, while the third party candidacies of Thurmond and Wallace each won less than 3% of the popular vote, with Thurmond carrying four southern states. Truman’s surprise victory was the fifth consecutive presidential win for the Democratic Party, the longest winning streak for either party since the 1880 election.

To give you an idea of the political climate of the times, here is an NBC Radio Special Report, America Votes from October 30, 1948.