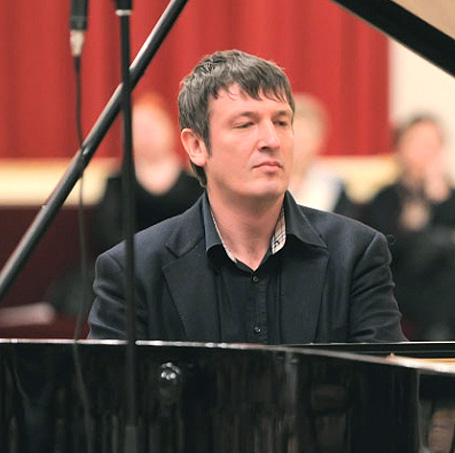 Boris Berezovsky - running the gamut from Bartok to Boogie in one night.

Boris Berezovsky – running the gamut from Bartok to Boogie in one night.

To Bucharest, Rumania this week for a concert from the 2011 George Enescu International Festival featuring the National Philharmonic of Hungary, conducted by Zoltan Kocsis with Boris Berezovsky, piano performing the music of Bartok, Albeniz, Gould and Enescu.

Considered a great pianist, Zoltan Kocsis performed with the Berlin Philharmonic, Chicago Symphony Orchestra, the San Francisco Symphony Orchestra, the New York Philharmonic, the Staatskapelle Dresden, the Philharmonia of London, and the Vienna Philharmonic.[4] Kocsis recorded the complete solo piano works and works with piano and orchestra of Béla Bartók. In 1990, his recording of Debussy’s Images[6] won “The Gramophone” Instrumental Award for that year. He won another with the violinist Barnabás Kelemen in 2013 in the chamber category for the recording of Bartók’s Violin Sonatas Nos 1 & 2.

American critic Harold C. Schonberg praised Kocsis’ extraordinary technique and fine piano tone. According to Grove Music Online, he had “an impressive technique, and his forthright, strongly rhythmic playing is nevertheless deeply felt and never mechanical. Kocsis has a natural affinity for Bach, but is also a fine exponent of contemporary music and has given the first performances of works by Kurtág.”

Kocsis co-founded with Iván Fischer the Budapest Festival Orchestra in 1983, thus opening a new epoch in the history of Hungarian orchestral playing. Kocsis played a determining role in the direction and the development of the program policy of the orchestra from its founding, and from 1987 also appeared as a conductor at their concerts.

He became the musical director of the Hungarian National Philharmonic in 1997 and held the title until his death in 2016.

Boris Berezovsky studied at the Moscow Conservatory with Eliso Virsaladze and privately with Alexander Satz. Following his London début at the Wigmore Hall in 1988, The Times described him as “an artist of exceptional promise, a player of dazzling virtuosity and formidable power.” In 1990, he won First Prize at the International Tchaikovsky Competition.

In May 2005 he had his first solo recital in Théâtre des Champs-Élysées in Paris and played in the same venue in January 2006 with the Orchestre National de France. In January 2007 he played seven recitals “Carte Blanche” in the Louvre. In May 2009, he premiered Karol Beffa’s “Piano concerto” in Toulouse, with Orchestre National du Capitole de Toulouse and Tugan Sokhiev as conductor.

Quite an outstanding concert. Here’s what’s on the players: