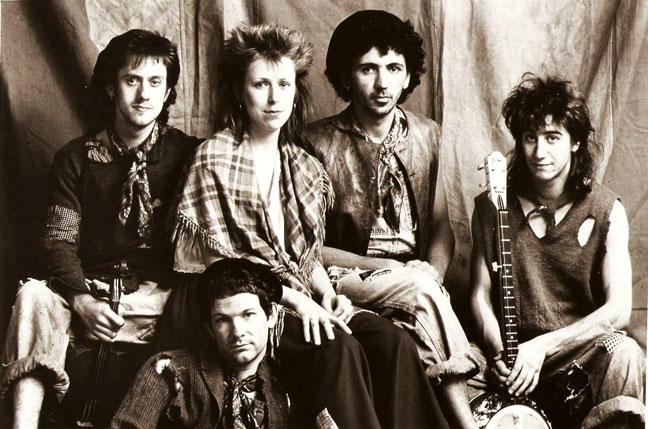 Dexys Midnight Runners During their "Come On Eileen" phase.

During their “Come On Eileen” phase.

Most people recall Dexys Midnight Runners as the band who gave us Come On Eileen, one of the big pop hits that defined the 1980s. But they were a lot more than a one hit band (they had another big hit, Geno, which was big in the UK and not so much here). Dexys Midnight Runners (or Dexys as they are now called), were originally a horn-based band heavily influenced by Northern Soul who went through a number of direction changes before making a brief stop in the folkish, string-laden sound that became their signature trademark.

As Dexys prepared to record their first album for Mercury, Singer-founder Kevin Rowland decided that he needed more proficient string players to achieve the sound he envisioned. He sent Speare to invite Bevington to join Dexys, which she agreed to do, and Rowland gave her the Irish-sounding stage name of Helen O’Hara. Rowland also asked her to recruit two other violinists; she brought fellow students Steve Shaw and Roger Huckle, whom Rowland renamed as Steve Brennan and Roger MacDuff, and Rowland named the violin section “The Emerald Express”. However, the need to rearrange all the songs for both strings and horns left the brass section of Paterson and Maurice (and to a lesser extent Speare) feeling that their role in the band had diminished. Thus, just prior to the recording sessions, Paterson and Maurice quit. Rowland was able to persuade them to remain in Dexys long enough to record the next album .Shortly thereafter, Speare also joined their planned departure.

Sadly, the band went through a lot of turmoil and record company drama and their popularity flagged considerably by the end of the 80s. There have been fits and starts at reunions over the years and there is a current incarnation of the band (at least as of 2012) , so there’s always hope things will work out.

Tonight it’s the band from their Soul period, just prior to their direction change and breakthrough. It was recorded by the BBC in 1981 and it’s a reminder that a lot of bands pigeonholed by one hit song actually had a lot more to say.