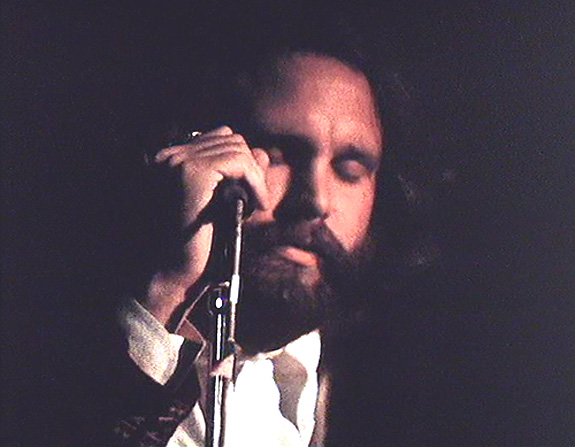 The Doors Morrison. His insistence at not having the movie lights on added a nice tone of mystery to the proceedings.

The Doors Jim Morrison: his insistence at not having the movie lights on added a nice tone of mystery to the proceedings.

Anyone who is even a passing fan of The Doors probably has, or at least has heard, some version of this concert. This particular incarnation, as legend has it, comes from a mixdown of the original multi-track masters of the complete Festival. The sound quality is mostly astonishing and it gives a pretty good idea of what The Doors sounded like at this momentous, and somewhat notorious Festival.

The Isle of Wight Festival 1970 was held between 26 and 31 August 1970 at Afton Down, an area on the western side of the Isle of Wight. It was the last of three consecutive music festivals to take place on the island between 1968 and 1970 and widely acknowledged as the largest musical event of its time, greater than the attendance of Woodstock. Although estimates vary, the Guinness World Records estimated 600,000, possibly 700,000 people attended. It was organized and promoted by local brothers, Ron and Ray Foulk through their company Fiery Creations Ltd and their brother Bill Foulk. Ron Smith was site manager and Rikki Farr acted as compere.

The preceding Isle of Wight Festivals, also promoted by the Foulks, had already gained a good reputation in 1968 and 1969 by featuring acts such as Jefferson Airplane, T. Rex, the Move, the Pretty Things, Joe Cocker, the Moody Blues (performed at the 1969 festival), the Who, and Bob Dylan in his first performance since his 1966 motorcycle accident.

A little over an hour. And to refresh your memory if you’re familiar with it, here’s the set list:

Enjoy – play loud. It’s the weekend and it’s the end of an election –