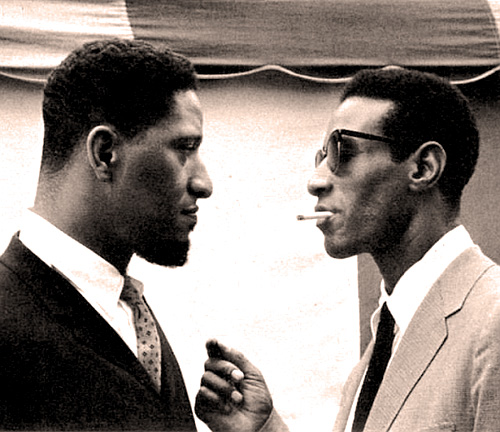 Sonny Rollins and Max Roach in 1966 - A gathering of giants.

Sonny Rollins and Max Roach in 1966 – A gathering of giants.

Another historic concert this weekend. This one featuring The Max Roach Quintet, joined by the legendary Sonny Rollins. All recorded on November 10, 1966 in Stockholm by Sveriges Radio. Along with Rollins and Roach are Freddie Hubbard (Trumpet), James Spaulding, (Alto), Ronnie Mathews (Piano) and Jymie Merritt (Bass).

Max Roach started as a traditional grip player but used matched grip as well as his career progressed.

Roach’s most significant innovations came in the 1940s, when he and Kenny Clarke devised a new concept of musical time. By playing the beat-by-beat pulse of standard 4/4 time on the ride cymbal instead of on the thudding bass drum, Roach and Clarke developed a flexible, flowing rhythmic pattern that allowed soloists to play freely. This also created space for the drummer to insert dramatic accents on the snare drum, crash cymbal, and other components of the trap set.

By matching his rhythmic attack with a tune’s melody, Roach brought a newfound subtlety of expression to the drums. He often shifted the dynamic emphasis from one part of his drum kit to another within a single phrase, creating a sense of tonal color and rhythmic surprise. Roach said of the drummer’s unique positioning, “In no other society do they have one person play with all four limbs.”

While this is common today, when Clarke and Roach introduced the concept in the 1940s it was revolutionary. “When Max Roach’s first records with Charlie Parker were released by Savoy in 1945”, jazz historian Burt Korall wrote in the Oxford Companion to Jazz, “drummers experienced awe and puzzlement and even fear.” One of those drummers, Stan Levey, summed up Roach’s importance: “I came to realize that, because of him, drumming no longer was just time, it was music.”

In 1966, with his album Drums Unlimited (which includes several tracks that are entirely drum solos) he demonstrated that drums can be a solo instrument able to play theme, variations, and rhythmically cohesive phrases. Roach described his approach to music as “the creation of organized sound.” The track “The Drum Also Waltzes” was often quoted by John Bonham in his Moby Dick drum solo and revisited by other drummers, including Neil Peart and Steve Smith. Bill Bruford performed a cover of the track on the 1985 album Flags.

By the mid 60’s, Sonny Rollins’ live sets became grand, marathon stream-of-consciousness solos where he would call forth melodies from his encyclopedic knowledge of popular songs, including startling segues and sometimes barely visiting one theme before surging into dazzling variations upon the next. Rollins was brilliant, yet restless. The period between 1962 and `66 saw him returning to action and striking productive relationships with Jim Hall, Don Cherry, Paul Bley, and his idol Hawkins, yet he grew dissatisfied with the music business once again and started yet another sabbatical in `66. “I was getting into eastern religions,” he remembers. “I’ve always been my own man. I’ve always done, tried to do, what I wanted to do for myself. So these are things I wanted to do. I wanted to go on the Bridge. I wanted to get into religion. But also, the Jazz music business is always bad. It’s never good. So that led me to stop playing in public for a while, again. During the second sabbatical, I worked in Japan a little bit, and went to India after that and spent a lot of time in a monastery”.

Max Roach and Sonny Rollins: A cool collaboration for a Sunday Afternoon.