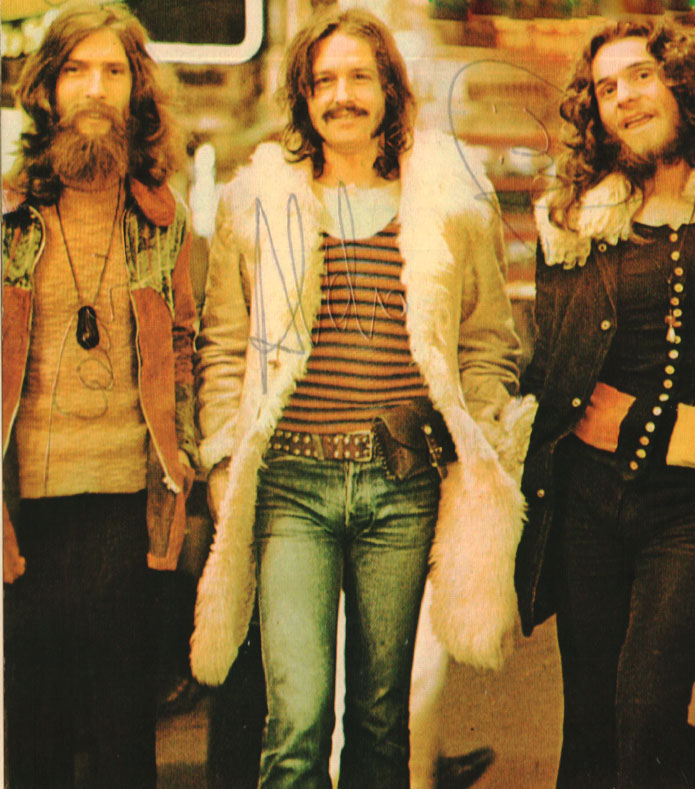 One of the most influential bands almost no one on this side of the Atlantic has heard of.

Le Orme: One of the most influential bands almost no one on this side of the Atlantic has heard of. (yes, they signed the photo)

The tape of this concert has been sitting in a box, on a shelf, in the vault for the better part of thirty years. I had assumed it was an advance copy of the album Le Orme In Concerto which came out in 1974, and both my tape and the album were recorded around the same time.

But that’s where the similarity ends. The released album is 43 minutes long. The tape of this concert runs over 82 minutes. It was given to me by members of the band whom I had worked with when they were recording in Los Angeles (the album that became Smogmaggica).

All that by way of saying this is an amazing and completely unknown concert recording by one of the most influential bands of the 70s Progressive Rock scene. Le Orme, like their contemporaries PFM, blazed new trails in the early 1970s. They were part of that wave that included the early incarnation of Genesis, Van der Graaf Generator, Caravan, Can, Gong and so many others. Le Ormè had a distinct point of view and impeccable musicianship and were admired by many musicians – on both sides of the Atlantic.

The only trouble was, Le Orme didn’t have a label here in the U.S. and not much in the way of prospects for one, and their American audiences was relegated to the lucky ones who snapped up their albums from the import bins. The got virtually no airplay on radio in the U.S. and played only a few dates.

But even with that little in the way of exposure here, they were still able to create a huge influence on so many musicians and continue to have that influence.

So we come to this tape. I am assuming it was recorded in Milan in 1974, but it could be earlier and it could be in another locale. The released album was recorded in Rome and it’s possible elements from this concert wound up on that album. I haven’t been able to do an a-b comparison as my original album is packed away, waiting for rediscovery. The recording was made by Le Orme’s road-crew on a BASF 90 minute cassette (standard operating procedure at the time). It’s a little rough in spots, but that’s because the tape is not in the best shape.

But what is there is is a fascinating glimpse into a band not known by the large majority of listeners, of a concert not known to exist by any fans.

So it’s a journey of discovery for a lot of people all the way around. Bear in mind, this is a three-piece band doing a lot of complicated things. They pull it off with remarkable agility. And that’s part of what makes it all so extraordinary.

If you aren’t familiar with them, keep an open mind and hit the Play button . If you know about Le Orme and have been a fan for a very long time time, I would say you’re in for a very rewarding aural journey.