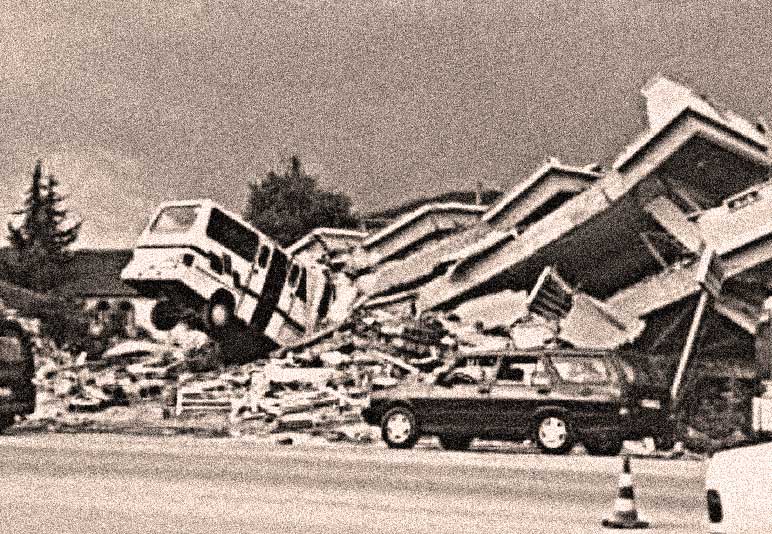 Not bad enough the first time around - coming back for a repeat performance.

November 12, 1999 – Adding Insult To Injury; Turkey Gets Hit With Another Big Quake – Trans Fats Are Not Your Friend.

The scene in Turkey: Not bad enough the first time around – it staged an encore.

News for this November 12th in 1999 was shrouded in mystery, cloaked in disaster and clogged with apprehension – and not necessarily in that order.

The mystery continued over the odyssey of Egyptair Flight 990, with more questions raised than answers. The FBI was considering a criminal investigation as all indications were pointing to intentional pilot error, rather than mechanical failure. The answers to the secrets were still somewhere in the waters off Nantucket, as the cockpit voice recorder hadn’t yet been located.

And on the subject of investigations – Senator John Danforth, who was leading the investigation over the Waco/Branch Davidian siege, had decided to test the more than 400 FBI weapons used during the incident in order to verify claims the FBI never fired a shot.

Meanwhile, in Turkey – a repeat performance of the devastating earthquake that rocked the region and killed some 17,000 people in August. At a magnitude 7.3, the latest earthquake to hit the area, close to the epicenter of the August quake, killed several hundred and left several more thousand homeless. But exact numbers of dead weren’t known, as the earthquake managed to strike in the middle of the night – as most earthquakes have the rotten habit of doing.

A United Nations relief plane, heading from Rome to Kosovo crashed 17 miles north of Pristina, killing all 25 aboard.

Pakistani sources claimed the rocket attacks in downtown Islamabad were the responsibility of terrorist Osama bin Laden. The rockets were aimed at the U.S. Embassy, but no one was hurt. Still, a name that would pop up again in a couple of years.

Mark Manes, the man who sold an assault weapon to Eric Harris and Dylan Klebold , the pair who perpetrated the Columbine High School massacre was sentenced to 6 years in prison.

And the FDA was moving to require a label change in foods containing Trans Fatty Acids. Seems Trans Fats, beside giving crackers and cookies their flavor, also contributed in clogging the average artery. Oh well . . .

And that’s a taste of what went on this November 12th in 1999, as viewed by The CBS World News Roundup.