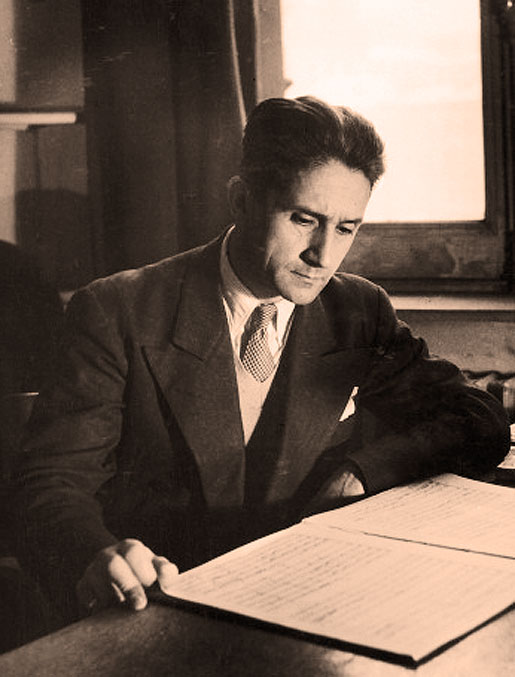 Sadly, the French conductor Roger Desormiere didn’t fully transition over to the era of the lp record before having his career cut short by a debilitating stroke. He was one of the most widely respected conductors in France, going from the late 1930s all the way to his forced retirement in 1952. Many of his early recordings are legendary and he’s highly sought after in collectors circles for many first performances. But compared to his contemporaries, his commercial recordings aren’t that vast in number. He did however, regularly broadcast over Paris Radio. And it’s one of those broadcasts I’m featuring this weekend.

Most people think of Jacques Ibert and they don’t go much further past Escales (Ports of Call). But Ibert was a versatile and prolific composer who was active for a very long time.

Ibert pursued a successful composing career, writing (sometimes in collaboration with other composers) seven operas, five ballets, incidental music for plays and films, works for piano solo, choral works, and chamber music. He is probably best remembered for his orchestral works including Divertissement (1930) and Escales (1922).

As a composer, Ibert did not attach himself to any of the prevalent genres of music of his time, and has been described as an eclectic. This is seen even in his best-known pieces: Divertissement, for small orchestra is lighthearted, even frivolous, and Escales (1922) is a ripely romantic work for large orchestra.

In tandem with his creative work, Ibert was the director of the Académie de France at the Villa Medici in Rome. During World War II he was proscribed by the pro-Nazi government in Paris, and for a time he went into exile in Switzerland. Restored to his former eminence in French musical life after the war, his final musical appointment was in charge of the Paris Opera and the Opéra-Comique.

Unfortunately, not a lot of his music is performed today and this weekend’s performance of the Symphony Concertante for Oboe and Orchestra featuring The French National Orchestra with Roger Desormiere and Oboist Jules Goetgheluk is probably one of the few performances given of the work. Recorded in concert around 1951, this performance, like many from these French Radio transcriptions, has most likely not seen the light of day since their first recordings. I would like to hope I am wrong, but I am afraid I may not be.

In any event, another rarity to fill out your weekend. Enjoy.