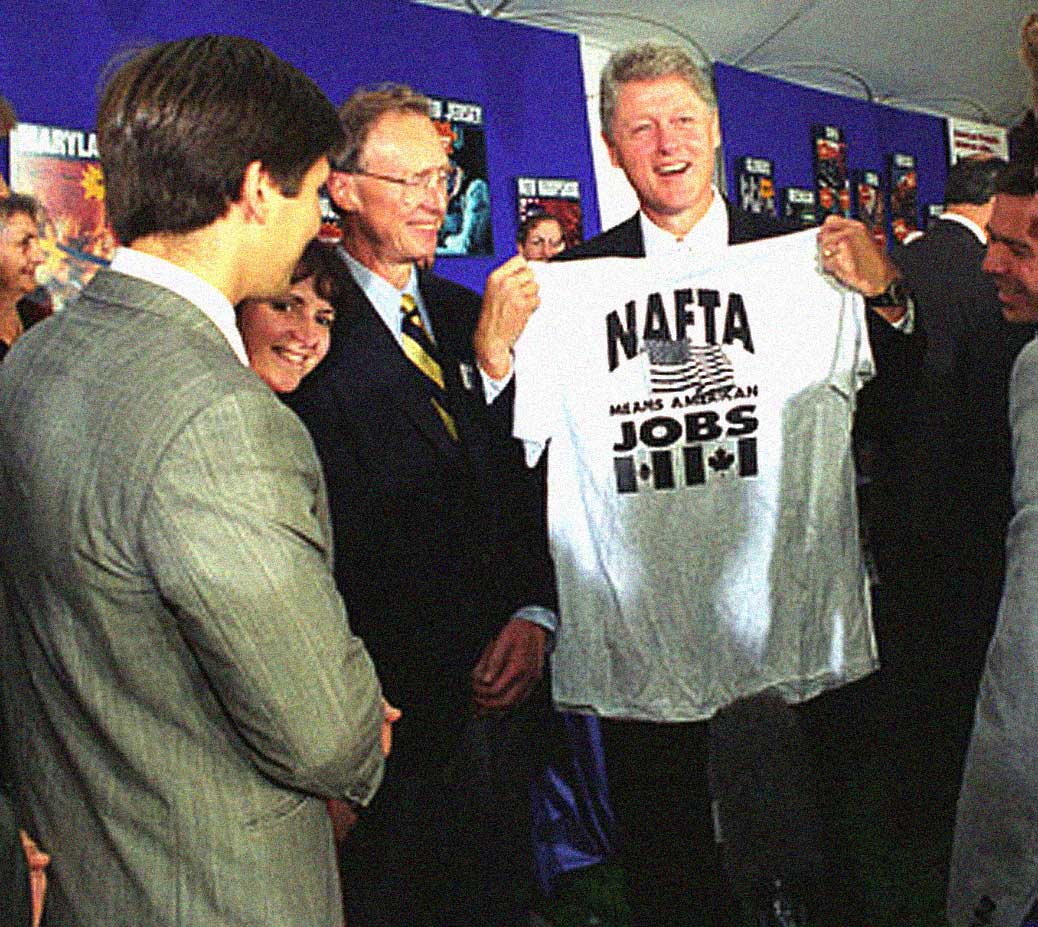 NAFTA: For a President used to squeakers, this was a landslide.

NAFTA: For a President accustomed to squeakers, this was a landslide.

As the newscast so aptly put it – a month earlier, everyone on Capitol Hill assumed NAFTA was dead. But on this November 18th in 1993 the White House was celebrated over what many considered to be a landslide victory for President Clinton.

The North American Free Trade Agreement (NAFTA) passed the House with 16 votes to spare, a landslide for a President accustomed to squeakers. It was a win for Bill Clinton, but it was also a win for the bi-partisan coalition that delivered it. Republican leaders promised 126 votes and 132 came on board. Democratic leaders exceeded their goal of 100 by 2 votes. After this vote, an upcoming Senate vote was expected to pass easier than it did with The House. Most everybody was celebrating, but there were skeptics. NAFTA didn’t please everybody.

Meanwhile, labor fights caused travelers at Washington’s National Airport to become stranded as American Airlines flight attendants went on nationwide strike as negotiations broke down. The Pilots were also voting whether or not to join them. Flights were cancelled and Union spokespeople said the strike could last well into the Thanksgiving weekend.

In other Labor news – an agreement was reached by the United Mine Workers Union to settle key issues behind a six month strike by some 17,000 mine workers in 7 states. But they haven’t settled the fates of Union Mine Workers accused of strike violence.

Back on Capitol Hill – the Senate voted 76-21 to revive the Independent Counsel Investigations, while restricting future counsels of writing final reports in such blunt language as was used to describe Edwin Meese and the Iran-Contra scandal. And passage of a crime bill may be hung up until 1994. The sticking point being handgun control under The Brady Bill. Republican strategist Ed Rollins went before a Federal Grand Jury in Newark New Jersey on efforts described as his efforts he acknowledged and then disavowed to suppress Black voter turnout in the recent New Jersey Gubernatorial election.

In Mogadishu, Somali warlord Muhammed Farrah Aidid appeared before a huge crowd after being dropped by the UN’s Most Wanted list, his first public appearance since June 17th.

In Bosnia – factions were meeting in Geneva, not to discuss peace but how to feed and shelter refugees while they get ready to spend the winter fighting.

And the question of Cable TV Pricing was being scrutinized by New York, California and 21 other states as a task force was set up to investigate claims from consumer groups that cable companies were exploiting loopholes in the new law designed to lower rates.

And that’s a sample of what went on this particular November 18th in 1993 as reported by the CBS World News Roundup.