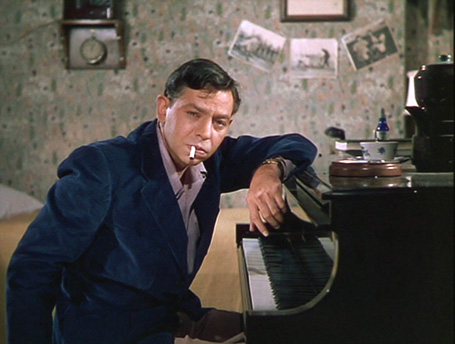 The inimitable Oscar Levant - doing his friend George rather proud.

The inimitable Oscar Levant – doing his friend George rather proud.

I thought I would dive into some Americana by way of a classic and previously unavailable concert featuring the legendary Oscar Levant on Piano with The Los Angeles Philharmonic, conducted by Artur Rodzinski, recorded live at The Hollywood Bowl on July 25, 1950.

Oscar Levant (December 27, 1906 – August 14, 1972) was an American concert pianist, composer, music conductor, author, radio game show panelist, television talk show host, comedian and actor. Though awarded a star on the Hollywood Walk of Fame for recordings featuring his piano performances, he was as famous for his mordant character and witticisms, on the radio and later in movies and television, as for his music.

Around 1932, Levant began composing seriously. He studied under Arnold Schoenberg and impressed him sufficiently to be offered an assistantship (which he turned down, considering himself unqualified).[3] His formal studies led to a request by Aaron Copland to play at the Yaddo Festival of contemporary American music on April 30 of that year. Successful, Levant began composing a new orchestral work, a sinfonietta.

The year 1938 saw Levant make his debut as a music conductor on Broadway, filling in for his brother Harry in sixty-five performances of George S. Kaufman and Moss Hart’s The Fabulous Invalid. In 1939 he was again working on Broadway as composer and conductor of The American Way, another Kaufman and Hart production.

From 1947 to 1949, Levant regularly appeared on NBC radio’s Kraft Music Hall, starring Al Jolson. He not only accompanied singer Jolson on the piano with classical and popular songs, but often joked and ad-libbed with Jolson and his guests. This included comedy sketches. The pairing of the two entertainers was inspired. Their individual ties to George Gershwin—Jolson introduced Gershwin’s “Swanee”—undoubtedly had much to do with their rapport. Both Levant and Jolson appeared as themselves in the Gershwin biopic Rhapsody in Blue (1945).

A truly memorable concert – Levant not only gives a wonderful performance of the Gershwin Concerto in F, but also offers a string of encores that include a solo performance of the Rhapsody In Blue. Other rarities on this complete concert, is the first performance on the West coast of the George Antheil Symphony Number 5. An extraordinary and almost-never-played work by an important American composer of the 20th Century.

A great concert all the way around. Here is what’s on the players:

Enjoy and tell your friends.