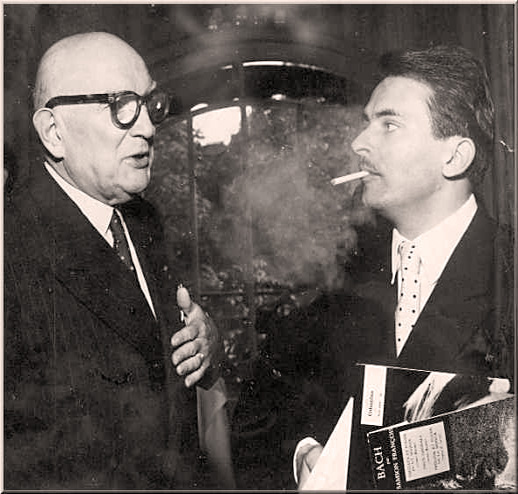 Eugene Bigot (L) with Pianist Samson Francois (R). Bigot was a major influence to many.

Eugene Bigot (L) with Pianist Samson Francois (R). Bigot was a major influence to many.

Eugene Bigot was one of the most widely respected and recorded conductors during the 1930s and 1940s. During the era of the 78 rpm record, Bigot was responsible for recording more French repertoire heard all over the world than just about any conductor at the time.

Sadly, his recording activities slowed to a trickle by the 1950s and had all but stopped prior to his death in 1965. He didn’t record much in the 1950s but he was a prolific broadcaster, with a huge number of concerts credited to him on an almost weekly basis.

Not a lot have surfaced, but it’s a safe bet Radio France no doubt have many of them tucked away in the archive. At least it’s hoped so.

One such broadcast, which has surfaced via the mountain of French Radio Transcriptions sitting in my archive, is a performance of the haunting Offrande à une Ombre by Henry Barraud, recorded during a studio concert circa 1951-1952.

A seldom performed piece anyway, it’s speculated this performance was one of the first, and it certainly pre-dates the Paul Paray/Detroit Symphony recording for Mercury by a few years.

Henry Barraud (sometimes Henri) (23 April 1900 – 28 December 1997) was born in Bordeaux. He was a student of Louis Aubert at the Conservatoire de Paris, but in 1927 failed to graduate, apparently because of his refusal to follow orthodox methods. Along with Pierre-Octave Ferroud and Jean Rivier, he helped to form the society Triton[1] for the wider distribution of contemporary music.

After the Liberation of Paris in 1944, he was named the Director of Paris Radio, and later, in 1948, of what later became ORTF, a position he held until his retirement in 1965.

So – a rare performance by an iconic conductor of a work by a sadly neglected composer.