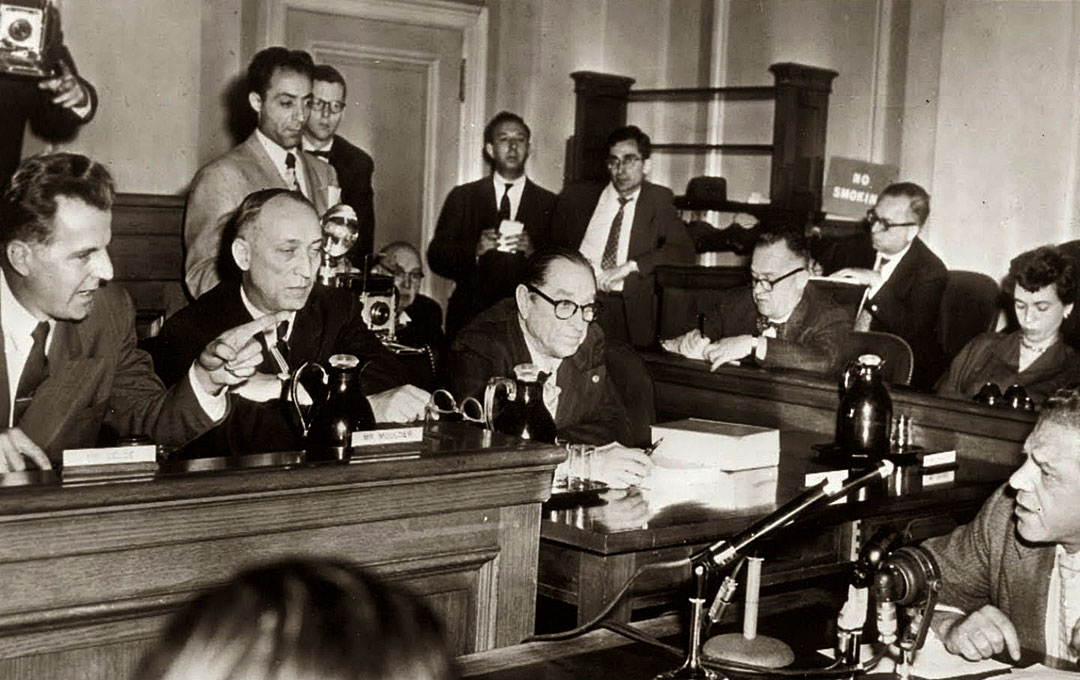 HUAC - The reign of terror begins.

HUAC – The reign of terror begins.

As the Cold War grew in intensity, and as the world reacted, news for this November 25th in 1947 was pessimistic and ominous. The Big Four Foreign Ministers Conference wasn’t yielding the results as planned, with Soviet Foreign Minister Molotov balking at overtures from the West over the Austrian and German peace treaties.

Britain decided to spend more time covering the upcoming national elections, rather than discuss the objections of Molotov and the repercussions from those objections. The Cold War was getting colder.

Meanwhile, Britain was still infatuated over the recent marriage of Princess Elizabeth to Prince Phillip, with newsreels of the wedding playing in movie houses all over the country.

Strikes were threatening seemingly everywhere – with unrest brewing in France with a threatened general strike, and unrest brewing in the U.S. over labor and wages. Normal peacetime conditions haven’t visited the world yet, and weren’t expected to improve anytime soon.

On Capitol Hill, sentiments were expressed on the House floor by proclaiming that “charity begins at home” with reference to the U.S. extending itself too much to Foreign Aid and not enough to Domestic programs. Fears were expressed that the Soviets were hoping all this expenditure for Foreign Aid would bleed the U.S. dry and thereby create chaotic conditions, favorable to Communism in America, since it was felt by some that Western Civilization was hanging in the balance.

And speaking of the fear of Communism in America – Hollywood reacted to the House Un-American Activities Committee(HUAC) and laid off ten writers and directors on this day, after being declared in contempt of Congress for refusing to tell HUAC whether they were Communist or not. Fifty major film company executives announced that the ten who would not talk were discharged of their duties as of November 25th, 1947 and suspended until the were acquitted or purge themselves of Contempt by swearing they were not, nor had ever been, members of the Communist Party. Representatives for the Film Companies said they would no longer hire anyone suspected to Communist leanings and fire, off-hand, anyone who was suspected or even rumored to be leaning a little too far left.

And that’s a small slice of what went on, this rather fractious November 25th in 1947, as presented by NBC Radio‘s News Of The World: Late Edition.