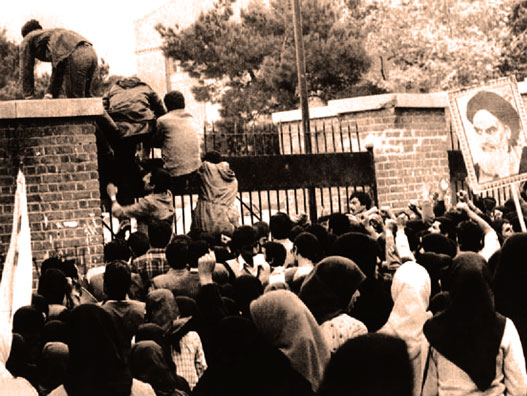 Shortly after the takeover of the U.S. Embassy in Tehran on November 4, 1979, ABC News inaugurated a new late-night news show, Nightline whose tagline was “America Held Hostage: Day . . .(fill in the blanks)”. And that’s pretty much how it went, day after day for over 400 days.

But on this day in November in 1979, the hostage drama was still new and still unfolding. And the scramble for a diplomatic settlement went into fever pitch.

At first, the students planned a symbolic occupation, in which they would release statements to the press and leave when government security forces came to restore order. This was reflected in placards saying: “Don’t be afraid. We just want to sit in.” When the embassy guards brandished firearms, the protesters retreated, with one telling the Americans, “We don’t mean any harm.” But as it became clear that the guards would not use deadly force and that a large, angry crowd had gathered outside the compound to cheer the occupiers and jeer the hostages, the plan changed. According to one embassy staff member, buses full of demonstrators began to appear outside the embassy shortly after the Muslim Student Followers of the Imam’s Line broke through the gates.

As Khomeini’s followers had hoped, Khomeini supported the takeover. According to Foreign Minister Yazdi, when he went to Qom to tell Khomeini about it, Khomeini told him to “go and kick them out.” But later that evening, back in Tehran, Yazdi heard on the radio that Khomeini had issued a statement supporting the seizure, calling it “the second revolution” and the embassy an “American spy den in Tehran.”

The occupiers bound and blindfolded the Marines and staff at the embassy and paraded them in front of photographers. In the first couple of days, many of the embassy workers who had sneaked out of the compound or had not been there at the time of the takeover were rounded up by Islamists and returned as hostage

And that was the dominating news of the day. The reports, the reactions from Capitol Hill, the attempts at a quick settlement – and all the news in-between.

That’s what was happening on this day in November of 1979, as reported on the CBS World News Roundup and the 9:00 am CBS Radio Network News.