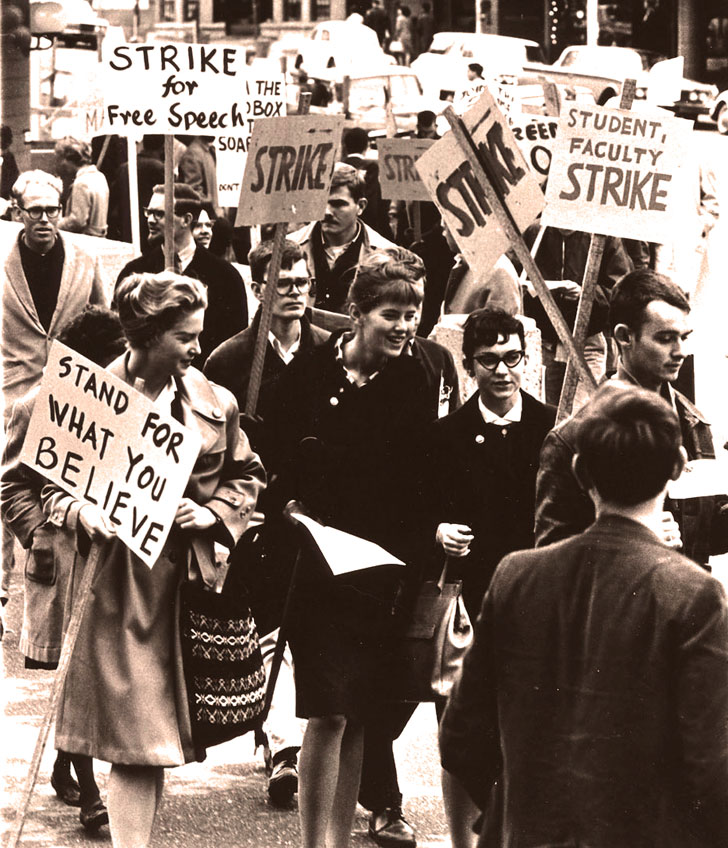 Although it started two months earlier, this day in 1964 marked a turning point in the Protest movement in the U.S.

In 1964 students at UC Berkeley began a series of protests over the banning of political activities on Campus and insisted the University acknowledged the students’ right to Free Speech and Academic freedom.

Stemming from an incident where members of SLATE, a campus political group formed in 1958 to support the students right to off-campus issues, among them the Civil Rights movement were prevented from soliciting donations. In September of 1964 the group set up tables asking for donations to SLATE and were informed they were in violation of the University’s rule on political organizations other than Democrats or Republicans – the only two political groups the University recognized. And also at the time there was a Loyalty Oath, mandatory for all faculty members, which the group said infringed on Academic freedom. The protest resulted in several arrests and dismissals.

On October 2, 1964 a member of CORE set up a table at the intersection of Bancroft and Telegraph Avenues in Berkeley, thought to be a public strip of land, not a University owned strip of land. Jack Weinberg, a former student and member of CORE was confronted and arrested by Police, triggering  a spontaneous response from several hundred students who surrounded the Police car, refusing the allow the Police to leave. Neither Weinberg, or the Police car moved for the next 32 hours, during which time some 3,000 students surrounded the car.

On December 2, 1964 a group of between 1,500 and 4,000 students marched on Sproul Hall to demand re-opening of negotiations to change the laws. The demonstration and occupation of Sproul Hall were all peaceful. But at the urging of Alameda County Deputy District Attorney Edwin Meese ordered the hall cleared and arrested some 800 students.

And that was how it all started – and it continued off and on for the next four years, eventually transforming into the Anti-War movement. By then Ronald Reagan was Governor and things went from bad to worse.

But on this day in 1964 it was about Free Speech and Free Assembly.

Here is a documentary produced by radio station KPFA in Berkeley for The Pacifica Network on the Berkeley Free Speech Movement.