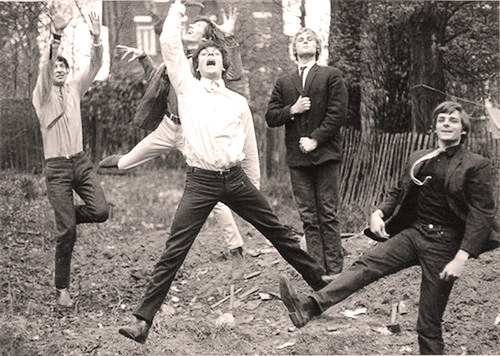 The Screaming Abdabs - Portrait of a band before they went mainstream.

The Screaming Abdabs – Portrait of a band before they went legendary.

Unless you already knew, Pink Floyd went under several names before they settled on the one that would lead to fame and fortune. One of those names was The Abdabs, or The Screaming Abdabs. Others were The Tea Set, Sigma 6, Jokers Wild and The Pink Floyd Blues Band.

Here is an excerpt from an excellent bit of detective work and essay by Keith Jordan for the blog Neptune Pink Floyd in 2006:

“In January 1965, the collection of people currently rehearsing as Leonard’s Lodgers would become one solid unit with varying names such as The Pink Floyd Blues Sound, The Pink Floyd Sound, The Tea Set and, eventually, just The Pink Floyd! It was as this group, after Chris Dennis (vocalist) left Barrett, Waters, Mason, Klose and Wright to their own devices, that they recorded their first demo as The Pink Floyd in the Regent Street Polytechnic during some studio downtime. These three tracks were the cover of a Slim Harpo R&B standard ‘I’m A King Bee’, and three Barrett original compositions ‘Double O Bo’, ‘Butterfly (AKA ‘Flutter By Butterfly’)’ and ‘Lucy Leave’.

Bob Klose, who was playing guitar, left the band in the summer of 1965 as his parents were moaning at him due to his lack of commitment to his studies. When term break came, Barrett started his first serious relationship with Lindsay Corner and had his first acid trip in Cambridge with friend Dave Gale. It was liquid LSD 25 dropped haphazardly onto sugar cubes so they took rather large doses! Barrett had hold of a orange, a plum and a matchbox. The fruit represented Venus and Jupiter apparently and Storm Thorgerson would use this story to embelish various works of art in the future!”

Here is that early unissued acetate of the Syd Barrett gem, Lucy Leave as recorded by The Screamin’ Abdabs, or The T-Set as it was scribbled on the label.

A little over a year later they’d turn the world upside down. But on this track they were still working on it.