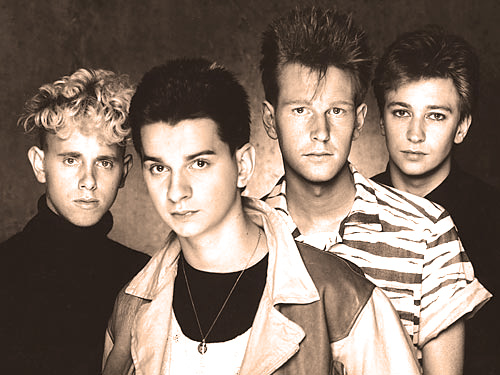 And would it have been the 80's without Depeche Mode? One wonders.

And would it have been the 80’s without Depeche Mode? One wonders.

We could use a little love . . or even a little like: Become a Patron!

Diving in the 80’s this weekend with none other than Depeche Mode, recorded live at the Hammersmith Odeon by the BBC on October 6, 1983.

In January 1982, the band released “See You”, their first single without Clarke, which managed to beat all three Clarke-penned singles in the UK charts, reaching number six. The following tour saw the band playing their first shows in North America. Two more singles, “The Meaning of Love” and “Leave in Silence”, were released ahead of the band’s second studio album, on which they began work in July 1982. Daniel Miller informed Wilder that he was not needed for the recording of the album, as the core trio wanted to prove they could succeed without Vince Clarke.[35] A Broken Frame was released that September, and the following month the band began their 1982 tour. A non-album single, “Get the Balance Right!”, was released in January 1983, the first Depeche Mode track to be recorded with Wilder.

For its third album, Construction Time Again, Depeche Mode worked with producer Gareth Jones, at John Foxx’s Garden Studios and at Hansa Studios in West Berlin (where much of David Bowie’s trilogy of seminal electronic albums featuring Brian Eno had been produced). The album saw a dramatic shift in the group’s sound, due in part to Wilder’s introduction of the Synclavier and E-mu Emulator samplers.[37] By sampling the noises of everyday objects, the band created an eclectic, industrial-influenced sound, with similarities to groups such as the Art of Noise and Einstürzende Neubauten (the latter becoming Mute labelmates in 1983).

“Everything Counts” rose to number six in the UK, also reaching the top 30 in Ireland, South Africa, Switzerland, Sweden and West Germany.[25] Wilder contributed two songs to the album, “The Landscape Is Changing” and “Two Minute Warning”. In September 1983, to promote Construction Time Again, the band launched a European concert tour.

This concert comes around the period of Construction Time Again, and it’s from that album where most of the music is performed.