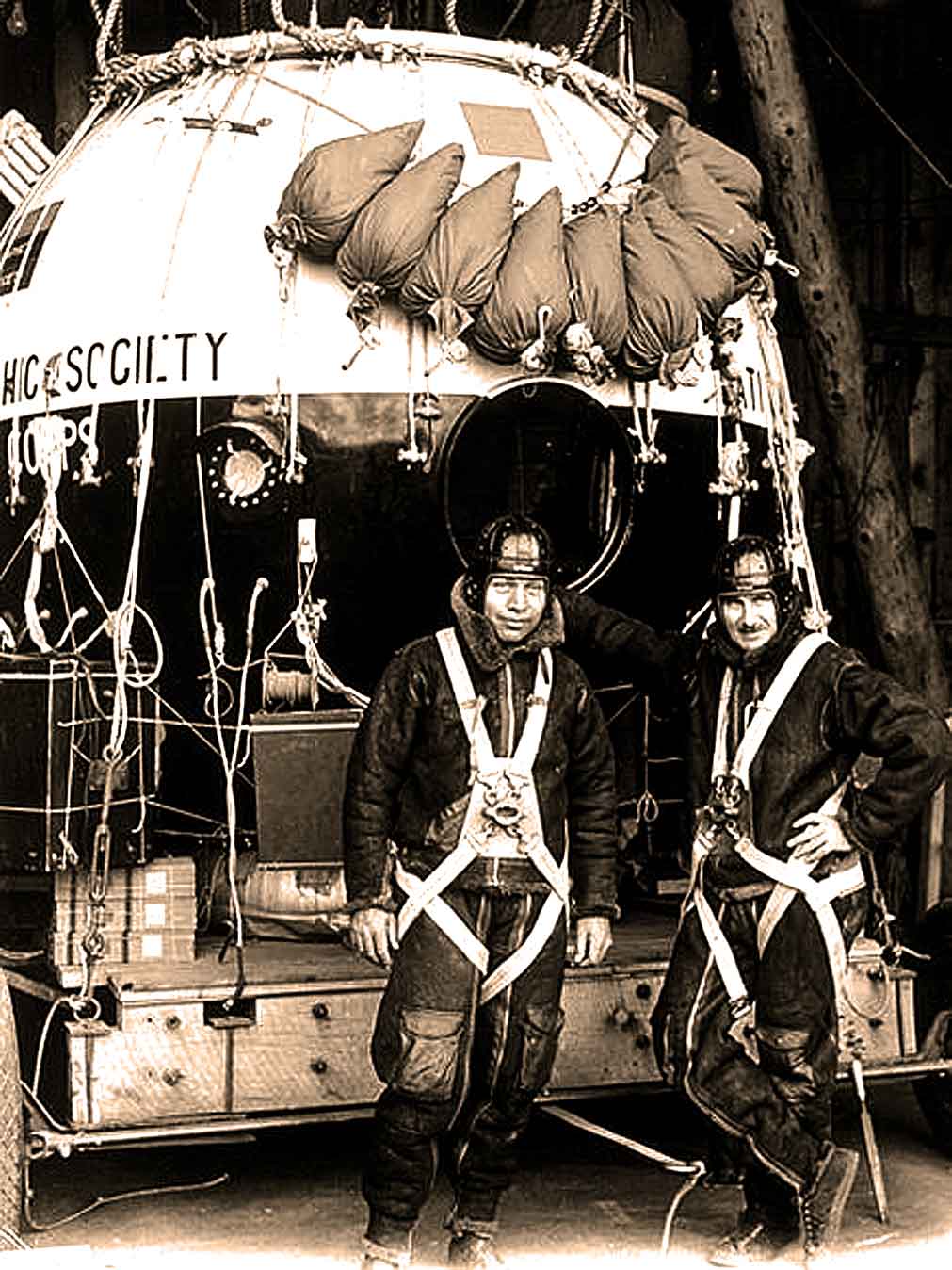 In 1935, exploring the Stratosphere was the equivalent to stepping on the Moon.

December 11, 1935 – Exploring And Celebrating The Stratosphere –

In 1935, reaching the Stratsophere was the equivalent to stepping on the Moon.

When U.S. Army Air Corps Captains Albert W. Stevens and Orville A. Anderson landed their Explorer II High-altitude balloon on the ground near White Lake South Dakota, they were the first Scientific Observers to reach a distance of some 72,395 feet above the earth, the highest anyone had gone before.

That the balloon was launched on November 11th, Armistice Day in 1935 was no accident as the potential exploration of outer space was intended for peaceful purposes that day, and for the future. And since it was a cooperative effort between The National Geographic Society and the U.S. Army Air Corps, both would share in the accolades.

It was a huge accomplishment. There had been several attempts prior to this and they had all failed to varying degrees. The success of Explorer II and the bringing back of much useful data to be pored over and used for future flights would eventually pave the way for Space Exploration. The flight of Explorer II on November 11th 1935 was the equivalent to the Walk on The Moon in 1969, as both were major scientific feats that had never been done before.

The Explorer II reached a peak altitude of 22,066 m (72,395 ft) at 12:30 pm on November 11, and remained there for 80 minutes. This set a new world altitude record, and one that would last for nearly two decades. The crew became the first humans to witness the curvature of the Earth. Unfortunately, the fan that was to be used to rotate the gondola proved ineffective at that altitude, so they were unable to avoid the Sun’s glare. This made viewing from one side of the capsule nearly useless. Despite this, Captain Stevens reported seeing details of the Earth’s surface for hundreds of miles. They were too high up to be able to view any movement on the ground, but their photography showed the potential of high-altitude reconnaissance.

Explorer II included communications equipment, and constant radio contact was maintained throughout the flight with the signal being broadcast across the U.S. and in Europe. The onboard instruments collected data on cosmic rays, the ozone distribution and electrical conductivity of the atmosphere at different altitudes, the atmospheric composition of the stratosphere, and the luminosity of the Sun, Moon and Earth. In addition, microorganisms were collected from the stratosphere. Mold samples were carried along to determine the effects of cosmic ray exposure. Stevens took along a camera to take pictures, including the first ever motion pictures shot from the stratosphere. The collected data showed that the ozone in the upper atmosphere was effective at blocking most of the ultraviolet radiation from the Sun. It was also found that the percentage of oxygen at the peak altitude was about the same as that at sea level.

So on December 11, 1935, at Constitution Hall in Washington D.C., the National Geographic Society held its annual awards ceremony to honor this accomplishment.

On hand was National Geographic Society President Dr. Gilbert Grosvenor and presenting the medals to Stevens and Anderson was General John J. Pershing.

Here is that medal ceremony and addresses from December 11, 1935 by Grosvenor, Pershing and the two explorers Anderson and Stevens.