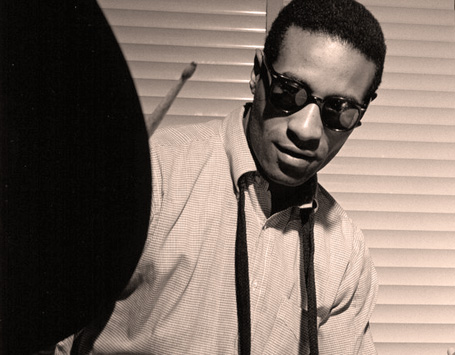 Max Roach - one of the greatest Drummers/Percussionists the Jazz World had to offer during the 20th Century.

Max Roach – one of the greatest Drummers/Percussionists the Jazz World had to offer during the 20th Century.

Over to Austria this week for a concert by the legendary Drummer/Percussionist Max Roach, recorded live at the Vienna JazzFest on July 8, 1994.

In the early 1980s, Roach began presenting solo concerts, demonstrating that multiple percussion instruments performed by one player could fulfill the demands of solo performance and be entirely satisfying to an audience. He created memorable compositions in these solo concerts, and a solo record was released by the Japanese jazz label Baystate. One of his solo concerts is available on a video, which also includes footage of a recording date for Chattahoochee Red, featuring his working quartet, Odean Pope, Cecil Bridgewater, and Calvin Hill.

Roach also embarked on a series of duet recordings. Departing from the style he was best known for, most of the music on these recordings is free improvisation, created with Cecil Taylor, Anthony Braxton, Archie Shepp, and Abdullah Ibrahim. Roach created duets with other performers, including: a recorded duet with oration of the “I Have a Dream” speech by Martin Luther King Jr.; a duet with video artist Kit Fitzgerald, who improvised video imagery while Roach created the music; a duet with his lifelong friend and associate Gillespie; and a duet concert recording with Mal Waldron.

During the 1980s Roach also wrote music for theater, including plays by Sam Shepard. He was composer and musical director for a festival of Shepard plays, called “ShepardSets”, at La MaMa Experimental Theatre Club in 1984. The festival included productions of Back Bog Beast Bait, Angel City, and Suicide in B Flat. In 1985, George Ferencz directed “Max Roach Live at La MaMa: A Multimedia Collaboration”.

Roach found new contexts for performance, creating unique musical ensembles. One of these groups was “The Double Quartet”, featuring his regular performing quartet with the same personnel as above, except Tyrone Brown replaced Hill. This quartet joined “The Uptown String Quartet”, led by his daughter Maxine Roach and featuring Diane Monroe, Lesa Terry, and Eileen Folson.

Not content to expand on the music he was already known for, Roach spent the 1980s and 1990s finding new forms of musical expression and performance. He performed a concerto with the Boston Symphony Orchestra. He wrote for and performed with the Walter White gospel choir and the John Motley Singers. He also performed with dance companies, including the Alvin Ailey American Dance Theater, the Dianne McIntyre Dance Company, and the Bill T. Jones/Arnie Zane Dance Company. He surprised his fans by performing in a hip hop concert featuring the Fab Five Freddy and the New York Break Dancers. Roach expressed the insight that there was a strong kinship between the work of these young black artists and the art he had pursued all his life.

Though Roach played with many types of ensembles, he always continued to play jazz. He performed with the Beijing Trio, with pianist Jon Jang and erhu player Jeibing Chen. His final recording, Friendship, was with trumpeter Clark Terry. The two were longtime friends and collaborators in duet and quartet. Roach’s final performance was at the 50th anniversary celebration of the original Massey Hall concert, with Roach performing solo on the hi-hat.

In 1994, Roach appeared on Rush drummer Neil Peart’s Burning For Buddy, performing “The Drum Also Waltzes” Parts 1 and 2 on Volume 1 of the 2-volume tribute album during the 1994 All-Star recording sessions.

Here’s what’s/who’s on the set:

A little over an hour of the amazing Max Roach and his ensemble.

More evidence he was one of the greatest.