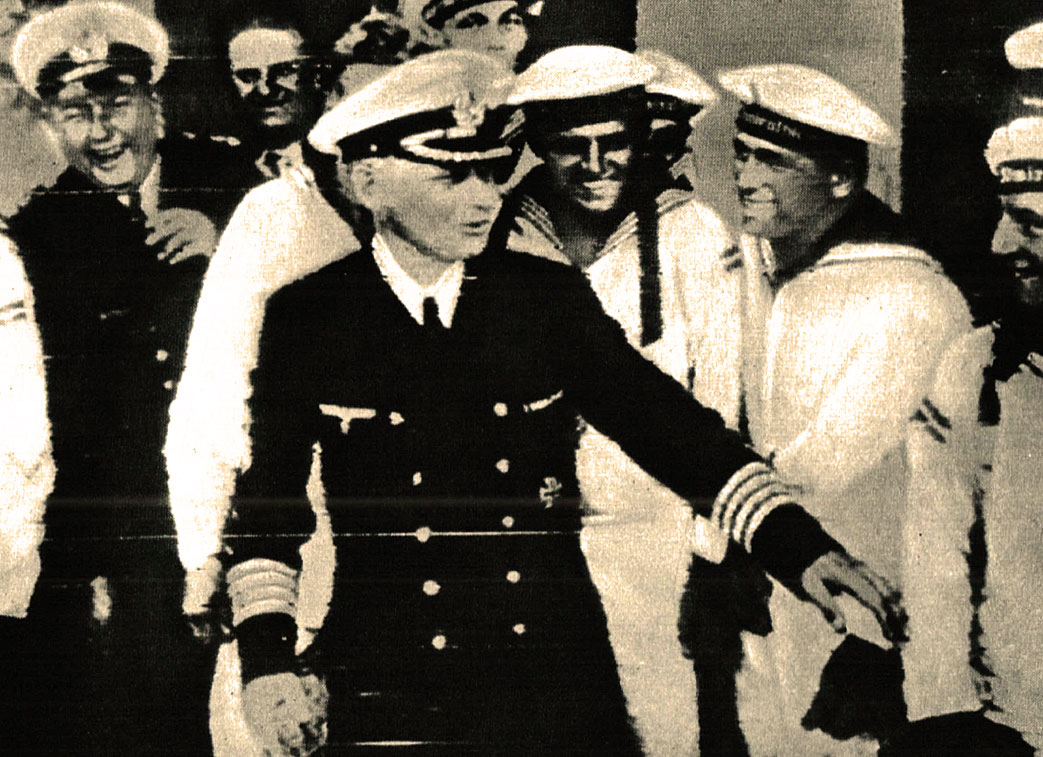 Graf Spee Captain Langsdorff and crew - the crew got to sit out the war in South America. Langsdorff would be dead of an apparent suicide a short time later.

Graf Spee Captain Hans Langsdorff and crew – the crew got to sit out the war in South America. Langsdorff would be dead of an apparent suicide a short time later.

News for this day in 1939 had to do with the sudden scuttling and sinking of the German Battleship Graf Spee, after an intense sea battle off the Uruguayan coast. The battleship, discovered and chased by British Naval forces, sustained considerable damage and was granted safe harbor by Uruguay, who pledged neutrality in the situation. But rather than risk an escape, which would most likely have resulted in the ship being sunk at sea and sustaining heavy loss of life, the ship’s Captain Hans Langsdorff decided to scuttle the ship and surrender the crew.

Once terms were settled and amnesty was granted for the crew, Langsdorff decided that, since he wasn’t able to go down with the ship, he did the next best thing and committed suicide.

News relayed back to Germany was met with shock and dismay over the loss of the Battleship, it was the first major loss sustained by Germany during these early months of the war.

With all that, it didn’t deter the average German from wondering what to do about the shortage of candles to be used on Christmas trees. No shortage of trees, but Germans frowned on the idea of using electric Christmas tree lights. The other big news of this day was what Germans were doing to get around the lack of one of their traditional holiday customs, now that some 1 million Christmas trees had arrived in Berlin.

Seems even the war couldn’t stop Christmas from happening.

Meanwhile, Canadian troops were arriving in Scotland, along with some American volunteers. Ireland was putting torpedo boats into service, patrolling waters for German U-boats in the area as well as keeping an eye out for violations of Ireland’s neutrality. Russia staged their first significant air-raid of Helsinki by sending 20 planes to bomb strategic objectives in what were the first few days of the Russian/Finnish War. Finnish news sources countered that several Soviet land attacks were repulsed and some 36 Russian tanks were destroyed.

On the Western front; all was quiet with only some artillery fire reported. The main activity was confined to scouting activities as reported by both German and French news services.

From the Far East came word from Tokyo that Japan was preparing to re-open the Pearl and Yangtze rivers to the commerce of foreign powers. The Pearl River was to be opened as far as Canton and the Yangtze River was to be open as far as Nangking. Those rivers had been closed to foreign traffic for several months. The assertion was the traffic of commercial shipping was disrupting Japan’s military operations at the time. Sources in Japan said the U.S. would not be shut out from commercial activities in China. The move was anticipated to signify a turn in U.S.-Japan relations with Japan making most concessions to American demands.

And that’s a little of what went on this day overseas, as reported by Mutual Radio News in Chicago on December 18, 1939.