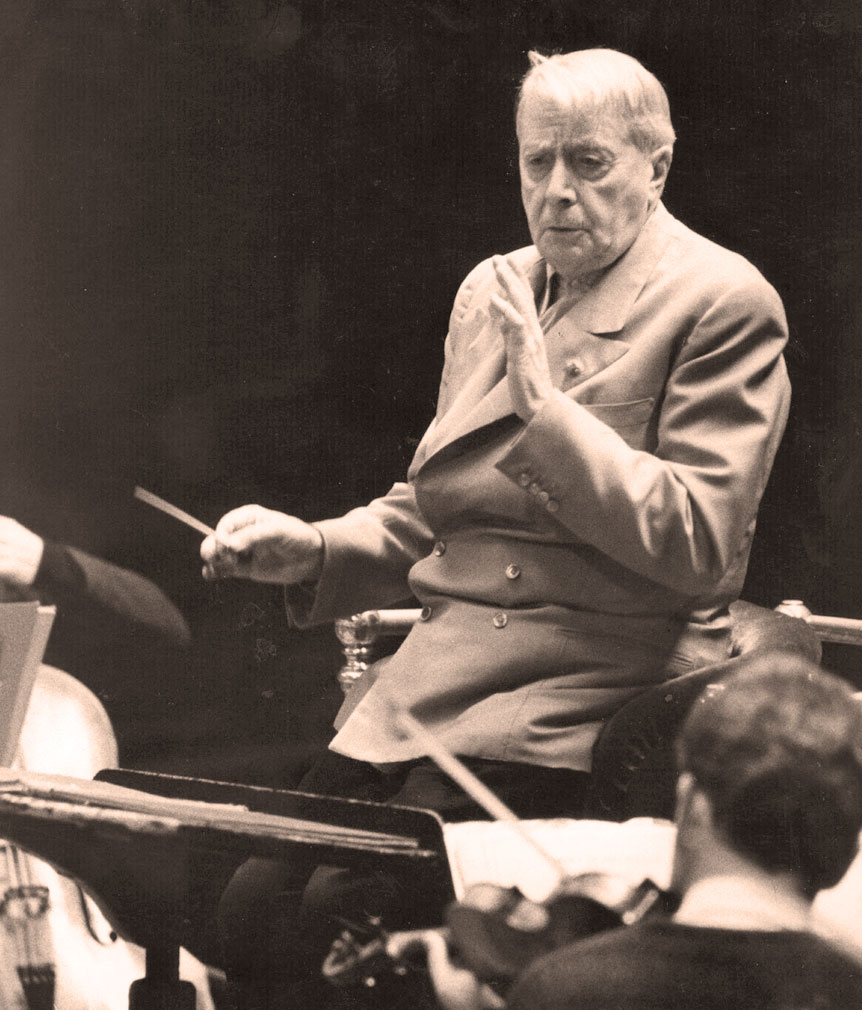 Another historic rehearsal from the weekly series The Boston Symphony in Rehearsal from NBC Radio. Originally broadcast June 9, 1951, this broadcast features the contemporary Russian-American composer Alexander Tcherepnin at the keyboard in a rehearsal (five minutes worth) of his 2nd Piano Concerto.

Alexander Tcherepnin was born in Saint Petersburg, Russia, and played the piano and composed prolifically from a very early age. He was stimulated in this activity by the atmosphere at home, which—thanks to his family’s Benois-Diaghilev connection—was a meeting place for many well-known musicians and artists of the day. By the time he began formal theory and composition studies in his late teens, he had already composed hundreds of pieces, including more than a dozen piano sonatas. Among his teachers in Russia were composer Victor Belyayev (pupil of Anatoly Lyadov and Alexander Glazunov), who prepared Tcherepnin for St. Petersburg Conservatory; Leocadia Kashperova (renowned pianist, protégée of Anton Rubinstein); and his professor at the Conservatory Nikolay Sokolov (pupil of Nikolai Rimsky-Korsakov). Notably at that time Tcherepnin’s mentor was famous musicologist Alexander Ossovsky, who also was a friend of his father. His works were influenced by composer Alexander Spendiarov.

After the 1917 Russian Revolution, the family fled St. Petersburg and settled for some time in Tbilisi, Georgia. In young Tcherepnin’s luggage were some two hundred short piano pieces, quite a number of which eventually reached print (notably in his Bagatelles, Op. 5). In Tbilisi he continued his studies at the conservatory, gave concerts as both pianist and conductor and wrote music for the Kamerny Theater (Palmer 1980, 18:637; Korabelnikova 2008, pp. 16–40). Because of the political environment in Tbilisi after Georgia was sovietized, the Tcherepnins chose to leave Russia permanently in 1921. They settled in Paris, where Alexander completed his studies with Vidal and Isidor Philipp, who was the head of the piano department at the Paris Conservatory, and became associated with a group of composers that included Bohuslav Martinů, Marcel Mihalovici and Conrad Beck. Philipp secured the publication of several groups of short piano pieces that Tcherepnin had composed in Russia. From Paris Tcherepnin launched an international career as a pianist and composer. In 1925 he won the Schott Prize with his Concerto da Camera, Op. 33. He began yearly visits to the United States in 1926 and later went to the Far East, making several extended visits to China and Japan between 1934 and 1937. He promoted composers in Japan (Akira Ifukube, Fumio Hayasaka, Bunya Koh, and others) and China (He Lüting and others), even founding his own publishing house in Tokyo for the purpose. While in China, he met the young Chinese pianist Lee Hsien Ming (1915-1991), and the two later married in Europe. They had three sons together: Peter, Serge and Ivan.

During World War II, he lived in France. The war virtually stopped his musical activities. The immediate postwar period, however, brought a resurgence of creative energies; the result was a number of important works, beginning with Symphony No. 2 (composed 1947, not orchestrated until 1951). In 1948, he went to the United States, settling in Chicago in 1950 and in 1958 acquiring United States citizenship. He and his wife taught at DePaul University in Chicago. His students there included Phillip Ramey, Robert Muczynski, Gloria Coates, and John Downey. Tcherepnin’s Symphony No. 3 was written while in Chicago during this time, commissioned in 1951 by Patricia and M. Martin Gordon who were the founders of Princess Pat, a Chicago-based cosmetic company. The work was dedicated to Patricia Gordon and premiered in 1955 with Fabien Sevitzky conducting the Indianapolis Symphony Orchestra. Meanwhile, his Symphony No. 2 had its world premiere with the Chicago Symphony Orchestra in 1952 under the direction of Rafael Kubelík. In 1957, Tcherepnin completed two major American orchestral commissions: the Divertimento, Op. 90 (for Fritz Reiner and the Chicago Symphony Orchestra) and his Symphony No. 4, Op. 91 (for Charles Munch and the Boston Symphony Orchestra). In 1964 he moved to New York and subsequently divided his time between the United States and Europe. He died in Paris in 1977 (Palmer, 18:637).

All in all, a pretty upbeat and downright jovial rehearsal which, by what appears from most of these recordings seems to be a common thing with Charles Munch and his work with the BSO.

Sadly, not a complete concert and regrettably not more of the Tcherepnin, but a welcome glimpse, as always, into the inner-workings of an orchestra at rehearsal.

More in the coming weeks.