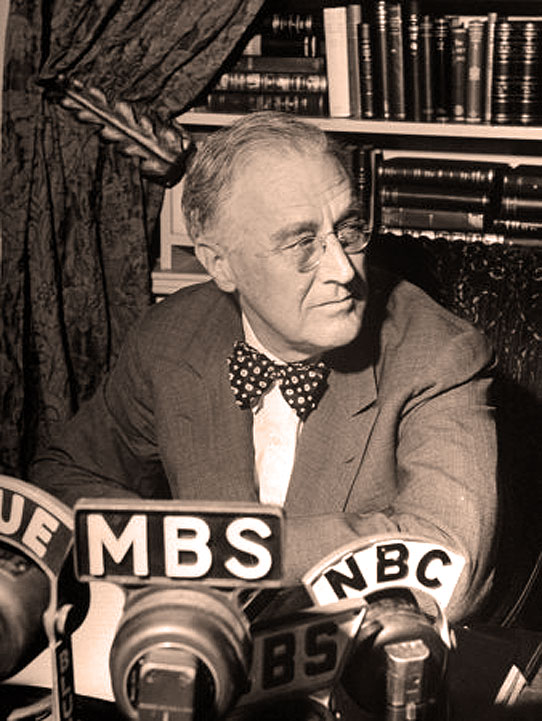 Recovering from a bad case of the Flu, President Roosevelt delivered the 1944 State of The Union address from the Oval Office, rather than in a Joint Session of Congress. The war had been going on for 3 years and the tide was turning in the Allies favor. It was a time for renewed commitment. And aside from assessment over the country’s progress and what still needed to be done, FDR also proposed what came to be known as The Second Bill of Rights.

Pres. Roosevelt: “We have come to a clear realization of the fact that true individual freedom cannot exist without economic security and independence. “Necessitous men are not free men.” People who are hungry and out of a job are the stuff of which dictatorships are made.

In our day these economic truths have become accepted as self-evident. We have accepted, so to speak, a second Bill of Rights under which a new basis of security and prosperity can be established for all regardless of station, race, or creed.

The right to a useful and remunerative job in the industries or shops or farms or mines of the Nation;

The right to earn enough to provide adequate food and clothing and recreation;

The right of every farmer to raise and sell his products at a return which will give him and his family a decent living;

The right of every businessman, large and small, to trade in an atmosphere of freedom from unfair competition and domination by monopolies at home or abroad;

The right of every family to a decent home;

The right to adequate medical care and the opportunity to achieve and enjoy good health;

The right to adequate protection from the economic fears of old age, sickness, accident, and unemployment;

The right to a good education.

All of these rights spell security. And after this war is won we must be prepared to move forward, in the implementation of these rights, to new goals of human happiness and well-being”.

Here is that entire State of The Union address, as delivered on this day in 1944.